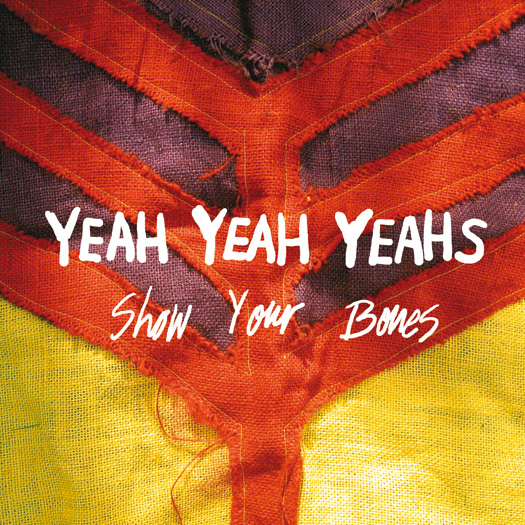 Sweet! The new album from the Yeah Yeah Yeahs is locked and loaded, packed and tracked, signed sealed delivered. Titled Show Your Bones, the new LP is set to bang your bones March 27th, 2006.

Show Your Bones is what happens when you put your finger in a light socket,” says singer Karen O. “Maybe there is some of that electric current flowing through the tracks of our album illuminating us from the inside out for you to laugh at and cry to or fry to. Or not.”

Karen O, drummer Brian Chase and guitarist Nick Zinner recorded the album with producer Squeak E Clean and mixed with Alan Moulder. The follow-up to 2003’s Fever To Tell, Chase says “in the early stages the music was STRETCHED WIDE and then tightened up.”

In the meantime, Fever To Tell was nominated for a Grammy for Best Alternative Music Album; Karen fell off a stage in Sydney and nearly broke her neck; Fever To Tell was certified Gold in the US and UK; Brian played in many bands (including Seconds) and tried many hair cuts; YYY released the DVD Tell me What Rockers to Swallow and were forced to add a disclaimer due to the content of violence; Nick released a book of his photographs I Hope You Are All Happy Now and later had his camera stolen; the video for “Maps” was nominated at MTV’s Video Music Awards for Best Art Direction/Best Cinematography/Mtv2 Award; Karen and Nick collaborated with Har Mar Superstar for separate sleazy songs on his The Handler album; The New York Times chose Fever To Tell as the best album of the year; MTV.com reports the new album is a concept album about a metaphysical journey with cat Coco Beware and titled Coco Beware and some believe what they read; Brian learned to cook Indian food and divine fine wine while studying tabla; Nick went on tour with Bright Eyes and gave up coffee; the band played with Devo in Central Park; oh – and Karen, Nick and Brian laughed and thought and fought with each other lots. And lots.

Whether it is a challenge or an invitation to be vulnerable, Show Your Bones it is. A track titled “Gold Lion” looks to be the first single off the new record and tour dates will be announced soon. Thanks good looking.