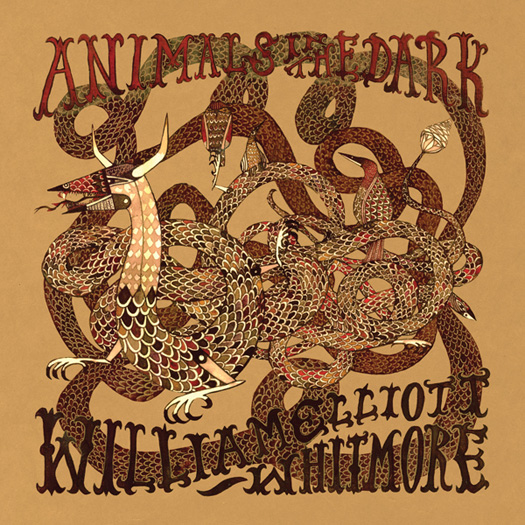 Sung over a martial drumbeat comes the first lines of “Mutiny,” the opening track on William Elliott Whitmore’s ANTI- Records debut Animals In The Dark, and it is immediately apparent that this is not simply a continuation of his Southern trilogy that spanned his last three releases. Rather than a reflection of life and loss and the world surrounding his Iowa horse farm on the idyllic banks of the Mississippi, “Mutiny,” and others of its ilk such as “Old Devils,” find Whitmore’s focus turned outward, to the state of the country and the missteps of the government.

“Look at the guys who are screwing us right now compared to the guys who were in power screwing people 2,000 years ago in ancient Europe,” Whitmore says emphatically. “That song applies to kings of old and President Bush. It’s about how the people can become the servants of the government when the government should be the servants of the people. I say the monsters in power can bomb people, but they can’t make something beautiful. So, I’m turning it around, counteracting their evil with beauty and art.”

While songs such as these are ferociously topical in today’s political climate, the rare virtue of William Elliott Whitmore’s songs is that they could have just as easily been sung in the desperation of a Hooverville during the Depression or in an uplifting choir of a 19th century rural congregation or marching on Washington in the 1960s. His timelessness and universality is both an allusive gift and a testament to his craft, and keeps Animals In The Dark from becoming an overtly political record. For all the ire in a number of the songs, there are stirring complements such as the modern hymn “There’s Hope For You” and the achingly beautiful “Who Stole The Soul.” It is Whitmore’s ability to balance contrasts — suffering and humor, truth and fancy, the literary and the earthy — that make his releases so human.

Whitmore was weaned on music by his musical parents – his father played guitar, mother the accordion. Young William dived unquenchably into their rich collection of “good hillbilly music,” keenly studying vocal nuances perfected by Ray Charles, Hank Williams and George Jones. When his father handed him a $10 Sears and Roebuck guitar, Whitmore summoned Williams’ rebel blueprint “Lovesick Blues” for instruction. “I still can barely play guitar or banjo,” he says with a modest laugh.

Two unlikely crooners leveled an even more profound impact. “I always loved velvety singers like Dean Martin and Frank Sinatra,” the 30-year-old admits. “Man, I used to try hard to sing like that but soon realized that I couldn’t. I used to smoke a lot and abused my throat. So, I turned my greatest weakness into my strength.” At 20 – when he felt he “could start to put my fingertip on that template of old-time music” – Whitmore started writing songs and developing his signature country-blues moan. Rowdy tours supporting kindred spirits from across the musical tracks — The Pogues, Lucero and Murder By Death — sharpened his stage act.

His craft blossomed accordingly. Born and raised and still residing on a farm in Lee County, Iowa, Whitmore literally cultivates his song cycles from earth. In fact, he wholly envisioned the modern pastorals Song of the Blackbird (2006), Ashes to Dust (2005), Hymn for the Hopeless (2003) and Calendar Club of Danger and Fun (2002) while working his land. Whitmore’s writing, in other words, links art and sustenance into an unbroken circle.

“I still live on the farm where I was born, still have horses and chickens,” Whitmore says. “I write mostly when I’m out doing my chores – I love the land and love the simplicity. I don’t even have a bathroom; I have an outhouse. I love to plant seeds in the spring and harvest in the fall and cut firewood in the winter. I draw a lot from relating the cycles of harvesting to those of birth and death.”

The land is omnipresent in all of Whitmore’s work, inescapable by Will as a writer and by the listener imbibing the heady brews he serves. Yet the ethereal notions of grace and justice seem to weave a chain that encircles Animals in the Dark, highlighting the maturation and growth of an exemplary artist. Whitmore showcases his classic songwriting and expressive playing of the acoustic guitar and banjo, but adds elements such as strings, an organ and a pedal steel, putting the songs into full arrangements and a band context for the first time. The results are a more expansive, cultivated sound, without losing any of the palpable soul that has garnered the 30 year old such critical acclaim.

“It’s autobiographical, but also looking at the state of the world,” Whitmore explains. “I was never good at writing protest songs like Bob Dylan or Michael Franti or Ben Harper. I was thinking about man trying to control other man, whether it’s governments bombing another country because they want their oil or fighting for water supply. It’s me being fed up with a lot of things.”

For us, it’s a poignant tome from one of today’s best musical storytellers.