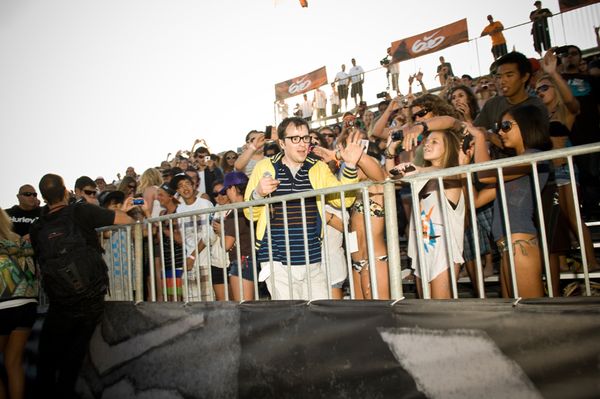 Any live music maven in the second decade of the 21st century knows that a plain old rock band has a little problem. Shows have become so elaborate, overstimulating fans with lights shows, props, dancers and other distractions, that three or four people banging away on standard instruments can seem awfully dull.
Weezer leader Rivers Cuomo has overcome this disadvantage by diving deep into the rock and roll frontman’s smelly trick bag and refreshing its contents with the kind of energy you’d expect from a young brat, not a 40-year-old dad with 15 years of stardom under his corduroy-hoisting belt.
Performing Saturday afternoon at the U.S. Open of Surfing in Huntington Beach, Cuomo spent more time in the audience than he did onstage. He climbed onto camera dollies, played catch with giant Nerf footballs and several beach balls, and consistently invaded the personal space of his screaming fans. The madman routine was sharp as an ice pick — Cuomo nailed every vocal in Weezer’s wordy hits, led the band and pulled out several large guitar solos to boot.
The undeniable fun of the Weezer show made clear that this alternative rock mainstay is still ready to take any comers. Freshly signed to the Los Angeles indie Epitaph Records after parting from its longtime label DGC/Geffen, Weezer is promising a return to the raw melodicism of its best-loved records. We’ll be spending more time with Weezer in anticipation of that release, but for now, Cuomo clarified the band’s arrangement with Epitaph and answered some other pressing questions about Weezer’s current state — and his killer live attitude — via e-mail.
The big news is that Weezer will release a new album, « Hurley, » on Epitaph Records on Sept. 14. This announcement ends the rampant speculation about how you would  release your next musical project. Why did you decide to go with Epitaph, rather than self-releasing via the Internet, or selling the music out of your garage, wrapped in a Wuggie?
Technically « Hurley » is released on our own record label, W Records, and it’s just being licensed to Epitaph.  So far we’ve had a really good creative collaboration with Brett Gurewitz and the other people at the label, and I’m looking forward to collaboration with other like-minded alternative music fans at the label.

I’ve only heard one track from the album so far — the super-punchy twist on nostalgia, « Memories » — but that one indicates that this album will be pretty raw. This seems like a departure from the pop experimentation of your last album, « Raditude. » Is it a deliberate about-face, or just another side of what you do so well?
We all felt that the really intense, raw emotional side of Weezer is what’s going to make everyone the happiest at this moment.

You wrote a song with Ryan Adams, another iconoclastic master of the pop hook, for this record. What was it like collaborating with him?
It was super fun working with Ryan.  He has a lot of crazy energy and enthusiasm.  I showed him a few ideas I had, and he said, « Great, let’s go in the studio and jam it out right now. » So I got on the drums and he got on the guitar, and we just jammed out the ideas for half an hour.  And at the end of that, we pretty much had the song that you hear on the record.

There’s also an appearance by Johnny Knoxville and his « Jackass » friends on « Memories. »  I’m kind of afraid to ask what went down at that session.
I showed up a little late and I pulled up in front of the house, got out of my car, and the studio is way in back of the house, about 100 yards away from the street, and I could hear them from inside the studio resonating through West L.A.  It’s funny, there’s about 30 people there, little kids, parents, and it’s just this giant bizarre family scene. I was actually kind of surprised at how timid the « Jackass » guys were, because they do such terrifying stunts on the show, but it seemed like some of them were kind of afraid to sing in front of other people.  It’s been great getting to work with Johnny Knoxville from time to time, because we were all friends with him when before he had any success and before Weezer got off the ground.

What’s the biggest change for you, musically, on this new album?
On any Weezer record, I’m always trying to expand my palette. I think the most salient way I’m exploring new territory on « Hurley » is in the way I sing.  I sang mostly the same way for many many years, but then recently in the « Hurley » sessions, I started getting excited about singing in different ways: like a crazy person, or like Gollum on one song, a forest gnome — and having fun. Invariably when you expand your palette, you’re going to come up with stuff that some critics don’t like, but the point is to have fun.

This is a time when pop spectacles resembling Broadway musicals dominate the touring circuit. What does it take for a rock band to really impress an audience these days?

I think probably with any performer, but maybe with rock music especially, the audience wants to see the singer being real, and exploring, and not doing a rehearsed routine, so I’m just constantly looking for new things to try. I’m really curious out there, and my curiosity has led me into all kinds of bizarre situations.  I’ve gotten all kinds of bumps and bruises and scrapes, but I’ve also gotten a lot of amazing connections to the audience and sometimes I’m amazed by the kinds of experiences I can create.  The other night, maybe at Osheaga [Montreal’s Osheaga Festival], I found myself at the bar in the back of the venue, serving someone a beer.  It felt so weird and creative.  Those are the things that I live for.

Your fans are among the most obsessive in rock. How do you gain energy from their devotion, without letting their often intense opinions about what Weezer should be doing get to you?

I think that’s a very important question for any artist or anyone working in the public eye now, because there’s such an open connection between the performer and the audience. The feedback is coming in constantly and immediately.  I’ve dealt with it more successfully at times than others. Now I feel like I have a super positive connection with the fans.  Mainly what I do is look for people that I have a connection with, and who get it.  Especially in the audience — there’s always three or four people whom I am like, « Yeah, you rule, man, » and I connect with them, and dance with them, and pick up on how they’re moving. Just focus on the positive.

Weezer has been a band for a long time, and the current lineup with bassist Scott Shriner has been together for a decade. What benefits come from working with a band that’s played together for such a long time? Any drawbacks?
Feels like Weezer’s in a great place now. Working together for so long, we’ve had opportunity to address differences and figure out the most productive way to be together, how to organize the band politically and creatively, and with so much of that sorted out now, it feels like we can make really great records quickly and often, and put on an amazing show every night. At the same time, it feels like there’s so much to discover and explore in each other creatively, and we’re constantly growing. Pat [Wilson] has really blossomed as a lead guitar player, and it’s taking the shows to a higher level.

You released « Represent, » an unofficial tribute to the U.S. Men’s Soccer Team, during the Word Cup. How did you feel about the outcome of the tournament?
I have mixed feelings. It was great to see the U.S. team get to the second round. But having got there I started to get my hopes up and think we could go really deep in this tournament, and then we didn’t.

Your image is as a perennial frustrated guy howling about girls, yet in reality you are a practitioner of Vipassana meditation. Can you explain how a peaceful mind can make such explosive music?
I do exercise my mind with Vipassana to make it more peaceful and concentrated, but I wouldn’t say I have a totally peaceful mind yet!  Anyway, I think audiences sometimes mistakenly assume a quality performance comes from some great emotional disturbance rather than really intense concentration.  Concentration and flow is what it’s all about. — Ann Powers