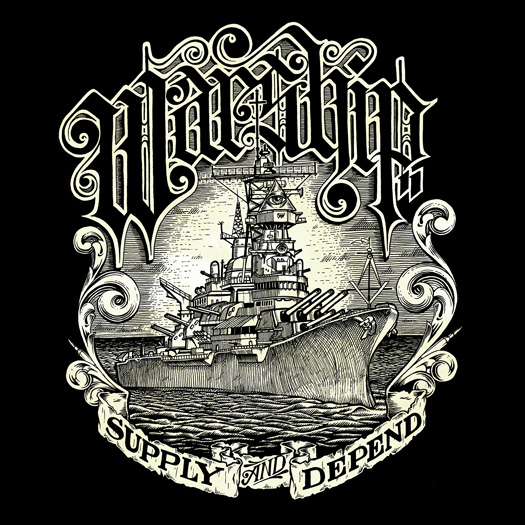 It’s hard to imagine a sound even heavier and more musically challenging than that of Long Island metalcore innovators From Autumn To Ashes, until you hearWarship, the crushing new project by FATA members Francis Mark (vocals/drums) and Rob Lauritsen (guitar/bass). The duo’s forthcoming Vagrant Records debut, Supply And Depend, showcases a startling union of imagination and brutality for a lethal sonic arsenal entirely set apart from the signature attack of their former band.

After collaborating on new music earlier in the year, Warship hit the studio this past summer with producer Andrew Schneider (Pelican, Cave In, Keelhaul), resulting in Supply’s 10 uncompromising tracks. Favoring torrents of blackened guitar sludge instead of mathematical shredding, capped by Mark’s tortured, face-melting screams, Supply is the sort of album that takes all of a second to make its devastating intentions clear.

“I don’t think a lot of people were expecting this. When I said I was starting a new band, people thought I was going to go in a more mellow direction,” says Mark. “It’s definitely a lot more blown-out, and raw, and with more driving rhythms and ugliness than we ever did with FATA.”

From Autumn To Ashes debuted in 2001 with the Ferret Records release Too Bad You’re Beautiful, immediately establishing the band as vital part of the modern heavy music scene. Four more releases followed on Vagrant, including 2003’s breakthrough The Fiction We Live and a 2008 concert album, Live At Looney Tunes.

But refusing to rest on laurels, Mark knew it was time to begin a new chapter in his life after wrapping up touring behind FATA’s well-received 2007 releaseHolding A Wolf By The Ears. Originally intending to begin working on a new FATA record, Mark and Lauritsen wrote together for the first time (Lauritsen had only joined the band in mid-2006), and a rapid chemistry between the two developed. While the songs born of that collaboration were immediately compelling, it became clear early on that the Mark and Lauritsen were venturing into completely new musical territories.

“This was first time that [Lauritsen] was able to showcase what he was sitting on, and I was blown away. That dude can play his ass off, but he hadn’t been challenged before, so I didn’t even know,” Mark recalls. “But the stuff we started coming out with just didn’t feel like a From Autumn To Ashes record. I was looking at this new opportunity as an exciting challenge.”

Warship answered the call head on and at ramming speed, wielding a high-octane debut that makes a major impression not just with its sheer power, but also through the dynamic, unpredictable nature of the music. Driven by Lauritsen’s downright ominous guitar tones, Supply fuses frantic hardcore with savage doom metal and gloomy, melodic fuzz-rock, for a sound somewhat akin to bare-knuckle street brawl between Saint Vitus, Snapcase and High On Fire.

The palpable energy surrounding the project also drove Mark to contribute one of the defining vocal performances of his career. Those familiar with Mark’s prior recordings may find the singer’s ventures into Supply’s more melodic territory (“Lousy Horoscope”; “Indoors”) something new and intriguing, but the infernal, larynx-shearing screams he unleashes amid scorchers like “Toil,” and “Fetus Fly Trap” are sure to grab just about anyone’s attention.

“I’m singing as hard as I can,” Mark says. “In heavy music across the board, I think many guys have cultivated this new way of screaming, where no one’s putting any emotion into it and really screaming. There’s a difference between just distorting your voice a little bit and making that contrived sound, or really grabbing the microphone and yelling your head off, and meaning what you say.”

That philosophy is all the more relevant in the context of Mark’s often scathing lyrics, which paint topics like war, suicide and the ills of society with equal precision, and at times, plenty of vitriol. “Some of it has to do with the uneven distribution of wealth in the world—how a handful of people have so much, and the majority has so little,” he says. “As long as people are comfortable, they don’t care what’s going on around the world. We’ve been at war for almost six years and people don’t even stop and consider it, because it’s not here. It’s business as usual. Maybe you see your gas price going up a little bit, but that’s about as much as it impacts us. Nobody’s very bothered by it unless they have family members in the armed forces.  I don‘t intend to be a political band, it‘s just thoughts on what I‘ve observed”.

The band’s name also holds special meaning—a play on the word “worship,” the moniker serves as a reminder of the destructive power of religion, which has often been wielded for less-than-glorious ambitions under the auspices of benevolence.

“I had a religious upbringing, but then in my teens the whole thing started to feel a little off,” Mark explains. “I feel like religion should be a personal thing, and a tool to bring people together, and have people take care of each other, and respect each other, but it’s not. It becomes a tool of segregation, a political tool, and people use it to gain power over one another, and that’s off the mark.”

With a November 2008 release slated for Supply And Depend and a string of warm-up dates already underway, it appears Mark and Lauritsen are ready to spend 2009 getting listeners acquainted with their bold, powerful new sound. As they introduce Supply And Depend to an unsuspecting scene, Mark plans to enjoy his return to the simple joys of playing in a small band, with a staggering future.

“The old days when FATA were starting out, and really hustling, were to me the most fun. Those old tours, when we were sleeping on peoples’ floors—those were the best times,” he recalls. “With Warship, we’re just going to make music that we would personally enjoy listening to and see where it takes us.”