GET YR BLOOD SUCKED OUT 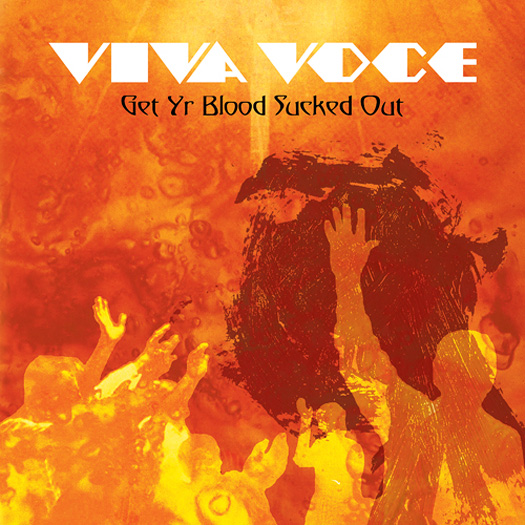 « They make an enormous sound; something like the Jesus and Mary Chain produced by Phil Spector, with Breeder harmonies and a widescreen slightly damaged quality »

« one of the most enjoyable bands around »

“This is our most ‘daggers out’ rock record to date,” says Kevin Robinson, one half of husband-and-wife duo Viva Voce. “It’s a lot more aggressive, lyrically and musically.”

If Get Yr Blood Sucked Out sounds like Viva Voce’s most immediate, intense and cohesive album to date, it’s with good reason. The Portland, Oregon two-piece launched into its recording as soon as they finished touring duties for 2004’s critically acclaimed The Heat Can Melt Your Brain, completing the twelve-track album in just three months. “Although some of the ideas have been haunting us for quite some time, we held off on finalizing the arrangements until we returned home,” says Anita. “We wanted a sense of urgency, of music that couldn’t be held at bay anymore.”

Fans of the duo’s previous work will be pleased to know that the Viva Voce touchstones – the masterful sonic build-ups, Anita Robinson’s beguiling vocals, her relentlessly brutal guitars and the non-linear song structures – are still in place. But each track is distinct, different and new. Opener Believer is a quasi-religious deep south stomp. Future single From The Devil Himself sounds like Jack White fronting The Pretty Things, while Drown Them Out balances a saccharine melody with effortless ennui.

“Our aim for this album was to capture something visceral, something immediate,” says Kevin. “We didn’t obsess over things and tried to capture as much raw performance as possible, with great results. We like dense melodic arrangements with muscle.”

So Many Miles has the muscle in its insistent, screeching guitars. The grandiose We Do Not Fuck Around is the album’s centrepiece, but could equally be the band’s motto: “Hey y’all, we do not fuck around.” Next up, Faster Than A Dead Horse is the natural companion-piece to former single Wrecking Ball, built, as it is, on the same kind of infectious, loose-limbed groove. The dream-like Special Thing finds Kevin coming over all soulful before How To Nurse A Bruised Ego Back To Health closes the album in suitably grandiose style, all George Harrison guitars, ascending piano lines and ethereal vocals.

As ever, the home-recorded album finds Viva Voce employing all manner of strange instruments in their quest for sonic satisfaction. “We used a bowed saw again,” says Kevin. “But that’s not really unusual for us. We used a LOT of guitars though. Oh wait, and a fishing rod.”