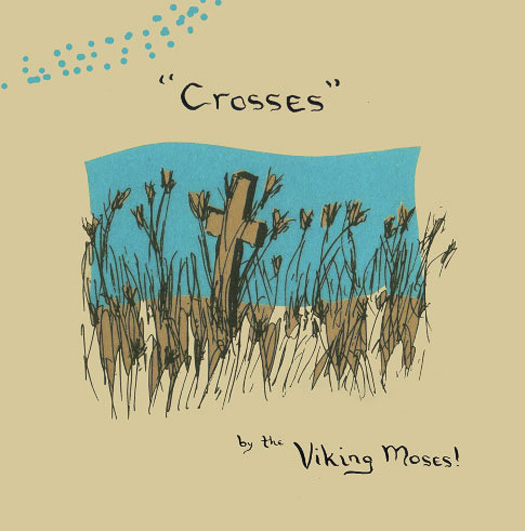 Viking Moses aka Brendon Massei is mercurial and an ever-changing singer-songwriter.  If anyone who has encountered his live shows over the past year will attest, he is a one-man band that is hard to pigeon hole.  Freak-folk-americana-wyrd-noise-drone?  Forget about it.  Viking Moses enthuses about influences from Dolly Parton to Nirvana.  And live?  He changes; from the fragile atmospherics of his recorded work to the total and complete abandonment to « gospel-preaching-over-noise, in the spirit of soul or free jazz ».

And somehow those dual influences have served Viking Moses well … if anyone has witnessed his live shows can testify; he becomes possessed by the Devil and then morphs into electric white noise understands but at the sametime he could release an album like ‘Crosses’, a child-like album of love songs dedicated to a girl named ‘Emma’.

Change makes sense when you realise that Viking Moses spent his childhood in the Ozarks of Missouri and was schooled in the surreality of Las Vegas.  Influenced by Leonard Cohen and Kurt Cobain, Massei spent his youth at sixteen assembling banjo-led pick-up bands touring across America and opening for the final Palace show in the 90s.  It was in 2003 that Brendon transmogfried into Viking Moses and began to support occasionally Jason Molina, Will Oldham and Cat Power.  During his stint in Devendra Banhart’s band  « White Buffalo Deer Woman Appears »  people praised his genius during his two song spot « …Donned with a garland of flowers, his booming voice was truly amazing, as he ran around the stage with his arms flailing. If I would have had any extra money, I would have bought everything he had… ».

And it was his place on the freak-folk Zeitgeist compilation ‘Golden Apples of the Sun’ along with Antony and the Johnsons and Coco Rosie that Viking Moses was brought to international attention which he has followed up with Crosses.

On Crosses, Viking Moses’ stripped-down, primitively created music has a spooky power to get right to the heart of the matter with its childlike reflections on love and anxiety.  A thrilling ride through the new US pop underground with Viking Moses’ plaintive voice booming of hope, loss and love with the beautiful simplicity of a Raymond Carver short story that never was.