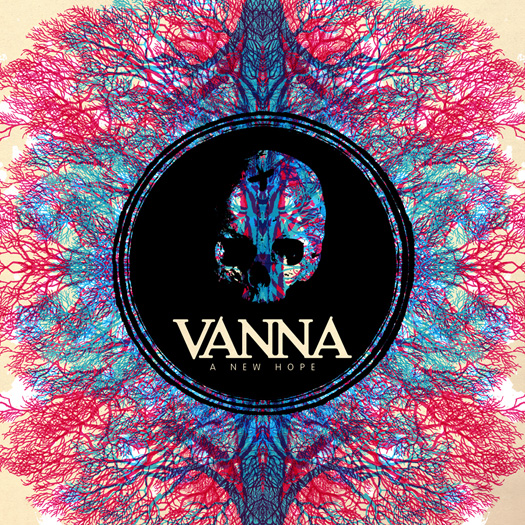 New England post-hardcore group Vanna have spent the last several years on a personal journey, and it’s the experience of living on the road that has helped them to discover who they truly are. After years of relentless touring and musical growth, the band has found balance with A New Hope, both literally and figuratively.

Since the bands formation in 2004 Vanna – Chris Preece (vocals), Nick Lambert (guitar/vocals), Evan Pharmakis (guitar/vocals), Shawn Marquis (bass) and newcomer Chris Campbell (drums) – have built a strong following based on their killer live shows, which helped garner attention from Epitaph Records. The band signed with the label in 2005 and released their debut EP, The Search Party Never Came, the following year. With the EP’s release came extensive touring until it was time to release their full length album, Curses, in 2007. Signaling growth sonically from the EP, Curses highlighted the band’s metalcore side establishing them as one of the most interesting up-and-coming bands in the post-hardcore scene.

After almost two years of touring in support of Curses, the band returned to their roots and entered the studio with producer Steve Evetts (Every Time I Die, Story of the Year) to record A New Hope. With widening musical vision and hard-won experience under their belts, Vanna tackled the writing and recording of A New Hope with an added perspective and understanding.

“The writing and recording process naturally becomes more dialed and decisive with each record,” explains Preece. “This record was approached with more of a group mentality. We talked a lot about what we liked and disliked about our last two releases, and each one of us were able to express ourselves in every step of the process.”

“Steve Evetts was honestly just a great fit for us,” adds Pharmakis. “For me personally it was great because I feel my relationship with the producer is important. If we mesh well it shows in the recording. The more comfortable you are the better you perform, the better you can concentrate and the better ideas you come up with as a team, as far as harmonies and melody ideas. And Steve was a great mentor. Chris Preece and I really meshed our lyric and vocal ideas together in a different way on this album and it worked out great. We definitely got to show a more melodic side on the record. I’d like to think this new record is like the perfect mix between our last two releases but with the sound we always wanted…and the skill it took time to earn.”

The result of their collaborative efforts are twelve smartly written tracks that highlight the band’s musical evolution, balancing the perfect fusion of emotive rock and perilous hardcore.

“Into Hell’s Mouth We March,” the first song released from A New Hope, rips the album open with the group’s finest mix of melody and hardcore yet. While fans will appreciate Vanna’s signature mix of weighty breakdowns and uplifting choruses, they’ll also hear a progression in song-writing, gang vocals and more melodic singing from guitarist/vocalist Evan Pharmakis which makes for a much more accessible sound. Anthemic tracks like the first single “Safe To Say” and “We Are Nameless” bring the goosebumps, pushing with trashing guitars and pulling with captivating melody until you are chanting alongside the dueling vocalists.

“I feel like A New Hope is a fresh start,” says Pharmakis. “This is exactly where we want to be, and I couldn’t be happier with the direction of our music. This is Vanna, we are finally Vanna.”
As Vanna looks forward with A New Hope, they continue down their unpredictable path of self discovery, continually growing and evolving with new purpose and A New Hope.