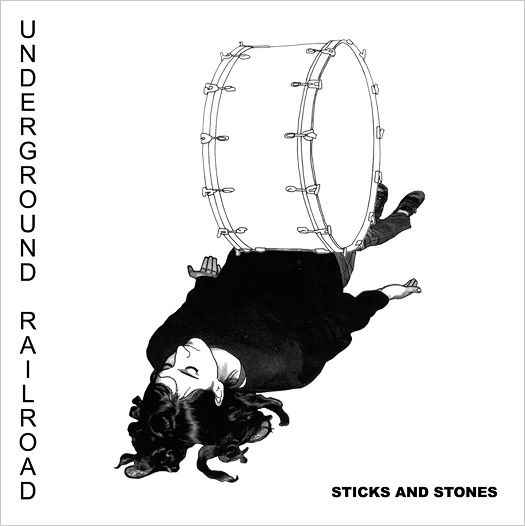 Formed five years ago in Paris, Underground Railroad released their debut album ‘Twisted Trees’ on One Little Indian in the summer of last year – a ferocious squall of a record crystallising the band’s love for post-punk and New York’s No Wave scene, it won them a passionate following through its wholly uncompromising nature.

“A sound to frighten Gallows back into the tattoo parlour.” – The Fly

Drummer Raphael Mura, guitarist Marion Andrau (who both take lead vocal duties) and bassist/backing vocalist JB Ganivet return in the latter half of 2008 with ‘Sticks and Stones’, a new album that smoothes over the jagged edges of their debut, imbuing upon them a strong melodic drive, without losing a trace of the band’s trademark integrity.

Recorded in Seattle at the dawn of 2008 with renowned producer John Goodmanson at its helm (Death Cab For Cutie, Blood Brothers, Sleater Kinney and Blonde Redhead), it sees Underground Railroad gain maturity without sacrificing their angular, noisy leanings; a Velvet Underground /Jesus and Mary Chain psychedelic swirl is discernible in the hypnotic ‘Stuff in Your Pocket’, while the simple, overdrive-led buzz of Pixies or Sebadoh is palpable in the heady fury of tracks like ‘Kill’. The record also features Seattle’s prodigal cello player Phil A. Peterson, whose arrangements on ‘Poems For Freaks’ or ‘Six Pieds Sous Terre’ lend these songs an unabashed, epic edge.

A spectacular live show is long part of the band’s appeal, Mura’s presence behind the drum kit magisterial and Andrau’s vocals captivating. Couple this with a strong desire to road-test their new material, and 2008 looks likely to grant Underground Railroad a whole new audience.