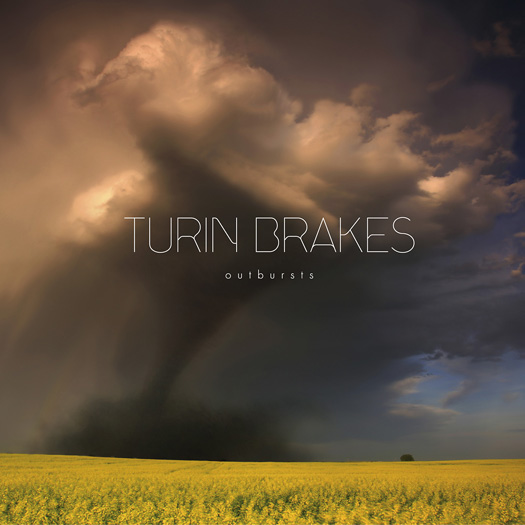 It has been more than ten years since Turin Brakes released their first record. The anniversary was a time for celebration and reflection – a reminder of how far the South London duo have come and of what made them such a great act in the first place.  It was also time to make a new album, a process which has brought Olly Knights and Gale Paridjanian full circle.
Having redefined the acoustic pop genre with their debut album, The Optimist LP, which was short-listed for the Mercury Music Prize in 2001, the pair went on to release a string of superlative collections which saw them gradually expand on their original sound and vision.  By the time of their last album, Dark On Fire, produced by Ethan Johns, the acoustic troubadours had turned into a fully-fledged, plugged-in, soft-rock band.
Now, with their new album, Outbursts, Olly and Gale have rediscovered the working practices that got them started in the first place, and with it their old sense of mission. Written, produced and (for the most part) performed entirely by the two of them, Outbursts is a collection of songs that returns to the essence of Turin Brakes, and not only echoes the quiet, edgy genius of their most celebrated work, but surpasses it.
“We thought ‘Let’s go back and do this whole thing like we used to’,” Gale says. “Do it as a duo. That’s where the magic is.”

“The fewer middlemen there are between us and the people who are interested in our music, the better,” Olly says. “I think our fans found it frustrating when they could see that we were having to play some sort of a game when we were signed to a major label. We’re embarking on a new era where there is a far greater immediacy between the band and the listener.”
This fresh approach is summed up in one of the album’s standout songs, Never Stops, a soulful, life-affirming mantra, with a raw, bluesy feel, which sums up the enduring spirit of Turin Brakes and their uniquely thoughtful brand of acoustic music. “We’ll be performing that for a long time, I hope,” Olly says.

The return to a simpler, more immediate approach to the recording process has certainly not diminished the scale of the duo’s ambition or the scope of their songs. Indeed, pop songwriting doesn’t get much bigger than the apocalyptic musing of the opening track, The Sea Change, which begins with the line: “Six billion backs against the wall.”

“I thought ‘Let’s see how epic Turin Brakes can go here’,” Olly says, with a wry chuckle. “The sea has taken on a new identity in my mind. It has the potential to destroy some parts of the world that we always thought would be there, and has this huge power over us. We can see quite clearly now that we are just ants on a big rock.”   Borne aloft by a patchwork of nimble, twinkling acoustic guitar lines, the lyric avoids grand, windy rhetoric. Instead, it relentlessly counts down, like a ticking time-bomb, from the concerns of six billion people to those of just one individual – which are, of course, exactly the same.
The idea of placing a person’s thoughts and feelings under a microscope that is being viewed from a great height, is a recurring theme in Olly’s lyrics. Paper Heart, an achingly vulnerable, waltz-time lament with a haunting piano and string part, dissects a relationship in which one person has the power to “rearrange the sunsets” and play with their lover’s world as if it was a little stage set.  Olly is understandably cagey about how personal these songs are.
“These are all moments I’ve experienced in my life. They trickle down and it can take years sometimes for them to turn into songs. Some of my lyrics can seem abstract, even a bit absurd at first, but I hope they convey an emotion. It’s a joyful experiment.”
Gale, who wrote two of the twelve songs – Apocolips and Embryos – is even more reluctant to analyse the songs in terms of personal experience. “You pick up on a tiny emotion within yourself and turn it into a film,” Gale says. “That’s what being a good songwriter is all about, and Olly is one of the very best. But there is a difference between what people create and who they are. It’s not necessarily the same thing. You should enjoy the film, not try and work out where the camera was the whole time.”

One of the most dramatic “films” on the album is Radio Silence, a song which captures a sense of  beautiful alienation redolent of OK Computer-era Radiohead. The moment of complete silence towards the end, followed by a sudden surge of sound and the majestic guitar line in the outro is breathtaking.  At other times it is  the simple power of words and tunes that give the album its distinctive emotional flavour. On Rocket Song, Olly navigates a melody line that climbs ever upwards in a delightful spiral. “This love is a rocket bound for the stars,” he sings, and the song cascades into life, like a display of fireworks.

“I just poured my heart out/Did I go too far?” Olly sings on the beautiful, melancholy refrain of the album’s title track, Outbursts, a song that recalls the jazz standards of the 1920s and works as a gentle and typically moving epilogue.

“We loved the idea that these songs were outbursts that were going to happen whether we liked it or not,” Olly says. “It’s an album that has been made with no outside briefing or preconceived plans. It is absolutely true to ourselves.”