AROUND / SONGS AND OTHER THINGS 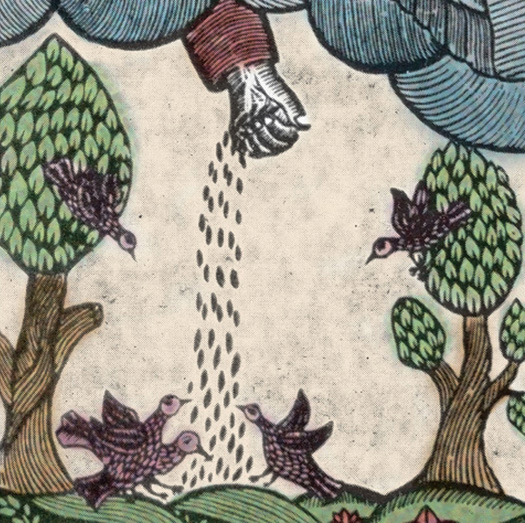 “Tom Verlaine and Television were for me the most inspiring: They were not

glamorous, they were human.”

Patti Smith in a recent interview for New York magazine

An accurate description of Tom Verlaine’s career would read much like a thesaurus entry for influential. He has truly shaped the sound of modern music, from his early days with the Neon Boys and Television, throughout his solo career, and most recently as the guitarist in Patti Smith’s band. Always ahead of the curve, Tom’s influence is immeasurable throughout the rock world with bands as diverse as The Strokes and Dos claiming him as an influence. No one, however, has been able to replicate his sounds, from delicate lace-like details to soaring and singling lines. It’s hard to describe without a slew of superlatives.

Anyhow, Tom would much rather talk about the new stuff. Thrill Jockey’s simultaneous release of around and songs and other things this spring will be the first new releases by Tom Verlaine since Warm and Cool in 1992.

around continues where Warm and Cool left off, using many of the same musicians. Billy Ficca’s mostly-improvised drumming shares the spotlight with Verlaine’s guitar, whose varied tones move effortlessly from melody to rhythm and are at once panoramic, pastoral and atmospheric. The influence of Verlaine’s love of jazz saxophone is manifested in sustained single-note melodies and his expert finesse is rousing.

songs and other things is Tom Verlaine’s first vocal release since The Wonderin 1990. The return of his cool vibrato weaving in and out of his guitar lines isexciting. For this new vocal release, Verlaine recorded with a variety of friendsincluding Television bassist Fred Smith. He wrote all the songs, played all theguitars and even spent some time on bass.

In the past year Tom has been touring with Patti Smith and playing select shows with Television. He is putting together a band that he will debut in his beloved hometown of New York City in late April/early May. He will be embarking on a world tour this spring, his first in over a decade.

AN INTERVIEW WITH ANGELA VIAJE

So Tom, why a century to get some recordings out?

Well I write stuff a lot, keep notebooks, and do a lot of stuff to my old cassette recorder. But I guess it doesn’t make the grade of wanting to record it. So time drifts on and…

What are your criteria? What makes you want to finish a song or record

a song at last?

I wish I could tell you! It is easier with the instrumental things, but singing and lyrics really seem to complicate everything, even the recording process. Then again, sometimes you write a song in twenty minutes.

Is there one of those on this new CD?

An Interview with Angela Viaje (CONTINED)

I would say maybe half of them. The ones that seemed to be looking to be agonized over just never made it to the studio.

How much were these tunes rehearsed?

Very little, Mostly they were rehearsed while the engineer was setting up the microphones. You have to have good drummers with good drums for this style of recording. Intuitive musicians.

Where did you find these guys?

Louie I saw playing in some biker bar! They played a version of “Caravan” and I saw that he could play some sort of different-style things. Graham has done a lot of stuff – Haitian bands, David Lynch soundtrack things. Jay Dee was on earlier solo records and in the touring band from about 1980 to 1988 and also a few random gigs in the “90’s.

And Billy Ficca, on the new instrumental CD, around?

Yeah, Bill is great for catchin’ an atmosphere. The recording style is: get the mics set and start recording, edit the mistakes, and erase the stuff you don’t like. A couple of evenings later, you have your record. There are suggestions made a lot, like, “let’s try brushes instead of sticks,” or, “only hit the kick drum twice per bar.” Unlike the others, Bill doesn’t even own a great sounding drum kit. I always have to call around to other drummers and borrow stuff. But that’s fun too.

Are you a real gear nut? Do you only use vintage guitars?

Not really. I’m not sure what vintage‚ signifies these days. I have some 60’s Fenders and some old Italian-made cheapies, and a few built from parts that were lying around. Things with some personality, I guess you could say. I like old amps though, 1940’s public address system things.

Let’s talk about the bass players.

Tony I know from Patti Smith’s group, who I toured with a few times. Fred from Television is always around. He did some engineering on the songs too. Patrick I’ve known for about 15 years now. He also engineered the bulk of both CDs. A great bass player, he played upright bass with the Marseille Symphony when he was younger, but it was too yawnsville. A lot of the bass lines are hummed in these’ guys ears.

No. I could, but it would take me hours.

Some of the songs don’t seem to have a bass player credit. Are you playing bass on those?

Yeah, I love playing bass. Everything I learned about bass comes from jazz records in the late 50’s and early 60’s. Not the virtuoso stuff, just little vamps and grounding notes, like things by Ron Carter and Richard Davis.

Is it true your hobby is plastic mini-shark fishing in an aquarium??

Gosh you know everything!

Can we talk about your lyrics?

Seriously, first of all why start a vocal record with an instrumental??

Oh, it just sat there so nice, kind of like an introduction. Like a play, or what you hear at the beginning of a movie.

The song “from her fingers” – does that title imply someone else, a character per se, having a pen or something and writing the song?

Hmm, I think it’s just a simple celebration of someone and the idea of the gift, or gifting. It’s really just not-too-serious, but not throw-away either.

Care-free in other words?

And “lovebird asylum seeker”- those lyrics are crazy!

Yeah, Britney Spears oughta do a version! The idea of crazy is pretty interesting, even if the state is not always blessed. Crazy contains a private code or system they say, something not socially acceptable or even acknowledged, something that needs to be cracked and yet cracked is another old-timey word for crazy. What a crazy interview! (laughter) Its weird and complicated how that song even got started. It was the picture of some friendly insects walking across a dusty desk and spelling out letters, a letter to someone, a message of hope!! (more laughter)

This is almost a folktale or children’s story

Yeah, partly, But all fractured up.

Maybe that’s the continuation of “lovebird” in a way. Lots of chords, key changes.

“Late night musings”? What is that line about burning an almanac, “a medication thing”?

Oh it’s just, you know, “forget the past,” an essentially healthy thing to do from hour to hour. There’s also some other repetition things happening, like the “you” that ends “blue light” and “nice actress”.

And then on your instrumental CD, you have a “candle” a “flame” and a “burned letter.” Are you an obsessive person??

OK so another basic question: how long did it take to do the songs CD?

In actual hours, not so many. It was a series of sessions – maybe 20 or so over more than three years. There are maybe 5 or 6 songs too that didn’t make the record. Next time it might be fun do it all in a week or two again, but maybe not. It is really fun to finish a song and call some people up and go and record it. There’s something really fresh about doing it that way.