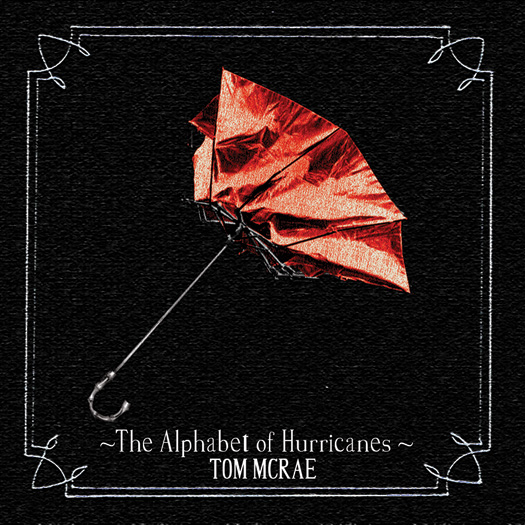 Tom McRae releases his new album ‘Alphabet of Hurricanes’ through Cooking Vinyl on 22nd February. Available on CD and as a download, the album will be preceded a week earlier by the single ‘Please’. Tom has also confirmed a full UK tour to coincide with both releases.

‘Alphabet of Hurricanes’, McRae’s first album for Cooking Vinyl, was written over a two year period during which he toured extensively across Europe, North America and the Far East. “Touring lost me my sense of home,” Tom explains. “Traveling constantly kept my feet itchy – being in motion is the best way to feel alive without actually engaging. I loved it.”

“After a while I just ran out of steam. I wound up in New York and started writing songs, trying to make sense of the last few years. Somehow I had to reconcile the self-destructive side of my nature and the desire to constantly smash things up with the need to feel settled in order to have a better grasp on song-writing and recording. If everything feels breathlessly exciting all the time it’s probably time to take a break from touring.”

McRae, whose debut album was nominated for the Mercury Prize and a Brit Award, recorded the album at his house in Bow, London. He bought a banjo, ukulele, mandolin, drums, violin, an old piano and “other junk from ebay”. Here he began fleshing out the songs he’d been writing on his travels. He dragged his band and a few friends into the studio for a couple of songs and the record began to take shape.

The title ‘Alphabet of Hurricanes’ comes from a song that actually started the writing process, but won’t see the light of day on the record of the same name. Each year hurricanes are named alphabetically and last year the world went through the alphabet twice, which had never happened before. Such was the huge increase in hurricanes the world over. The revenge of the natural world unveiling itself in one of its fiercest forms.

“There’s a line in that song,” expands Tom. “‘An alphabet of hurricanes can’t blow this drifter home,’ which sums up how I felt. The turbulence in my life seemed stuck on repeat, but then I realised if you stop fighting the wind and tides and work with them, you can call it sailing.”

So, maybe this is the sound of an angry man coming to terms with the vagaries of the world, the imbalance that it causes both personally and globally and the beginning of his understanding of where he fits in.