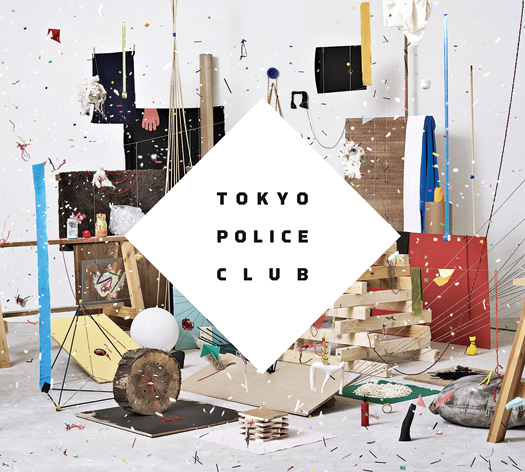 Champ is the second full length album from Toronto’s Tokyo Police Club, and as its name suggests, it’s a triumph – an album of taut catchy anthems that display a renewed vigour and fizz and from the young four-piece.

Tokyo Police Club first hit their stride back in 2006 when, straight out of high school, their hyperactive mini-album A Lesson in Crime came from nowhere to prove one of the year’s most refreshing releases, combining the youthful immediacy of The Strokes first LP with the off kilter discord of Pavement.

The surprise success of A Lesson in Crime led to relentless touring through the entirety of 2006/07, with appearances anywhere and everywhere, taking in festivals from Coachella to Glastonbury, two TV appearances Letterman and, bizarrely, an appearance on an episode of Desperate Housewives.  Eventually the band, by now exhausted to the extent that they were falling asleep on stage, took a month off to record.  The resulting album Elephant Shell, released in May 2008, was a slower, sweeter more introspective affair, a surprise for fans of A Lesson in Crime but one that displayed a new found lyricism from frontman-bassist and songwriter Dave Monks.

For this new record, Tokyo Police Club gave themselves time to recharge, to summon an Olympian spirit for a batch of new songs that burst with a new brightness. Says Dave Monks: “It has 11 songs, a Disney character, fuzzy bits, Canadian spelling, hockey sound effects, me singing the lowest note in my range, and one saxophone note”.

The band decamped from their native Canada to record the album in Los Angeles. “I think we’ve always wanted to make a summer record, something more breezy – the tracks on this record gave us an opportunity to explore that a little more,” says drummer Greg Alsop. “When it came time to go into the studio, the Canadian climate had turned against us and so we had to travel south to capture the vibe and feel that worked best with these songs.”

Stand out songs include the electronic pop of Bambi, the curiously titled opening duo Favourite Food and Favourite Colour and the urgently anthemic Wait Up (Boots of Danger).  Again Dave Monk’s lyrics are a real highlight with strikingly juxtaposed imagery – “the killer with the coloured kite”, “the national child star in a coat and a scarf, alone in the laundromat”.   Ultimately, though it’s the fizz bomb energy of the songs that appeals most.

The band (Dave Monks – bass/vocals, Greg Alsop – drums, Graham Wright – keys, Josh Hook – guitar) are all set to hit up Europe with some dates over the summer following a huge Stateside tour with friends Passion Pit.

This Is The Kit