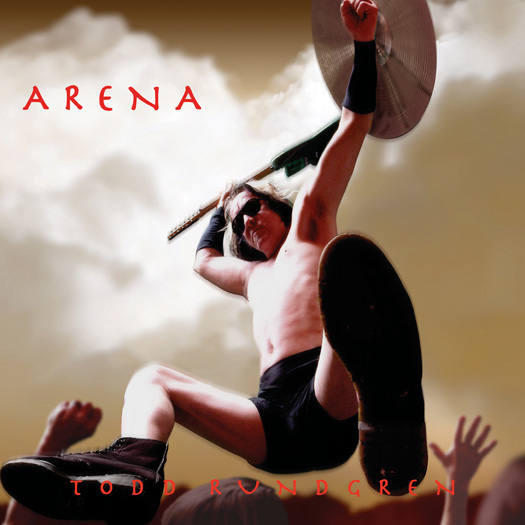 Multi-faceted and celebrated recording artist/producer Todd Rundgren is set to release his first full-length record of original studio material in 4 years, entitledArena in the UK on Monday 29th September.

Rundgren has been on the road in support of the release on a 20 + U.S. city tour this summer which kicked off with a week-long celebration in Hawaii, culminating with the first-ever live performance of Arena in its entirety on Todd’s birthday, June 22nd.  Rundgren will also hit the road in support of Arena this fall in Europe and the UK where the album will be released simultaneously to the U.S.  A sneak peak of an exclusive album track ‘Mad’ will be available on MySpace.com starting on July 15th (www.myspace.com/toddrundgrenmusic).

Arena, recorded in Todd’s current home state of Hawaii,is yet another notable addition to Rundgren’s remarkable career as a performer, songwriter, and producer. The album showcases his unique songwriting style and sonically captures the essence and energy of “arena” rock with bombastic, guitar-driven tunes like “Mountaintop,” “Strike” and “Mad,” while the anthemic song “Mercenary,” transports you to a stadium with its epic chorus, “How Do You Like Me Now?,”  resounding to every seat in the house.

“I found myself just going out and doing this sort of guerilla guitar quartet thing around the country and around Canada,” said Rundgren, “So when it came time to make a record, I thought maybe I’ll just continue in that vein and write something that is appropriate to the guitar, since the fans seem to be enjoying it so much.
“So when I decided to write a new album, I knew beforehand it was going to be this kind of old-school guitar-rock record.”  Known as a man of musical innovation, Rundgren’s latest release draws from his vast and impressive career experiences as a performer, songwriter and producer – including notable achievements on the cutting edge of music and technology such as: the first live nationally broadcast stereo radio concert (by microwave), which linked 40 cities around the country in 1978; the very first two commercially released music videos, one of which was nominated for the first-ever Grammy awarded for “Best Short Form Video” in 1983; and the launch of PatroNet, the world’s first direct artist subscription service all of course;  and of course there are the timeless hit songs, including ‘Hello It’s Me’, ‘I Saw The Light’, ‘Can We Still be Friends’, and ‘Bang The Drum.’

With ground-breaking accomplishments under his belt, Rundgren’s career boasts additional credits to the aforementioned roles he is most well known for, including video pioneer, computer software developer, conceptualist and, most recently, interactive artist (re-designated TR-i).  Given this incredible history and his constant creative state-of-mind, there are undoubtedly many more imaginative horizons for Todd Rundgren to discover.