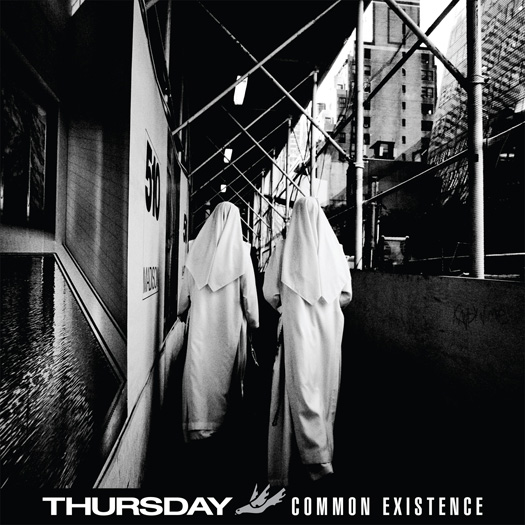 Thursday have always been difficult to categorize. Although they famously rose out of New Brunswick, New Jersey’s basement culture they’ve always been far too cerebral to be considered a traditional hardcore band. Over their eleven-year career they’ve toured with everyone from the Cure to Cursive, but have retained an inherent aggressiveness that can only come from being weaned on similarly independent nineties acts like Ink And Dagger and Lifetime. All of these references to other bands only serve as guidelines—and with Common Existence Thursday have finally reconciled all of their seemingly disparate literary and musical influences into a collection of songs that span the spectrum of human emotions from frustration to hope and, above all, love.

When Thursday–singer Geoff Rickly, guitarists Tom Keeley and Steve Pedulla, bassist Tim Payne, drummer Tucker Rule and keyboardist Andrew Everding– delivered the genre-defining Full Collapse, Alternative Press called 2001 « The Year Punk Broke Again. » SPIN christened the band the “The Next Big Thing” featuring Rickly on its cover in 2004. Thursday’s major-label debut, War All The Time, was a commercial success — but, ultimately, Thursday abandoned that route. Instead, they became something far more impressive in today’s musical climate: A band that eschewed gimmicks, instead forging a unique, organic and evolving sound more lasting than trend. The New York Times concluded, « They may not be rock stars, but by a kind of critical consensus they have emerged as the standard-bearers for their sound, the band considered most likely to survive the vagaries of rock trend-hopping. »

It worked and fans embraced the band’s subsequent releases such as their Dave Fridmann-produced 2006 opus A City By The Light Divided, 2007’s CD/DVD package Kill The House Lights and this year’s extremely well-received split-EP with the legendary Japanese screamo band Envy. Though the band have taken some time off to work on other projects–including Rickly’s visceral outfit United Nations , Keeley’s Black Jets project and Rule’s jaunt overseas to fill-in with My Chemical Romance—they have spent the better part of the past twelve months in a damp warehouse in New Jersey writing the songs that comprise Common Existence. “We worked on this record every day for almost a year,” explains Rickly, adding that the band spent six hours a day poring over the instrumentation and arrangements of these songs until they came up with something they were all ecstatic about.

“Writing this album was an enormous amount of work because we wanted to do something that was a progression and was also closer to the heart of what Thursday’s sound is about,” Rickly explains. “I think the rest of my band has really amazing chemistry and I really wanted to push them to find even deeper strengths than they had before,” he continues, « despite all the hard work, it’s the most fun I’ve had making a record. » And it shines through while listening to the disc in lieu of the sometimes heady subject matter.

From the cathartic “As He Climbed The Mountain », which is probably the first distortion-drenched hardcore song to feature a slide-guitar break; to the stripped-down post-hardcore anthem “Friends In The Armed Forces” (which features Quicksand’s Walter Schriefels); and the simultaneously dizzying and jaw-dropping rocker “Resuscitation Of A Dead Man” (featuring Rise Against’s Tim McIlrath), Common Existence reminds listeners why they’ve always loved Thursday. Even the band’s new-wave and indie-rock influences shine through on « Time’s Arrow »(in which the subject of regret is illustrated by literally turning the tape around at the end of the song and replaying it backwards to undo the damage), and « love Has Led Us Astray », further confusing cynics who attempt to slap the latest musical tag on Thursday.

All of this wouldn’t mean anything if the lyrical content on Common Existence wasn’t equally as urgent and incendiary. Tracing a path from lonely last calls to frenzied fallout shelters, the themes are explored in the compassionate and desperate tone that Rickly has been developing his entire career.

“So many of our songs have been about crazy or devastating situations and this record is about growing up and seeing that everyone shares the same existential crisis that we’re going through,” Rickly explains. “Everybody feels like they’re special or different and this record is about me realizing that everybody has these feelings and there’s nothing more common than what we think is our individuality.”

Rickly notes that he gained new perspective from various sources including a fan who lost her family to Hiroshima-related-illnesses and literary icons Cormac McCarthy (As He Climbed This Dark Mountain), Martin Amis (Time’s Arrow), and David Foster Wallace(Circuits of Fever) and that they’ve always been inspired by the troubadour tradition, in which every song is a story and every story has its own narrative force.

“I think that we’re still a post-hardcore band, » Rickly says. « Once you’ve been playing this long it’s natural to want to wring power out from different things, different chords, different time signatures,” he adds. “It doesn’t necessarily change the fundamental swing of your music; it just makes you want to express that same center in different ways.” With Common Existence that center remains intact, but Thursday have created something new and relevant, that can’t be ignored.