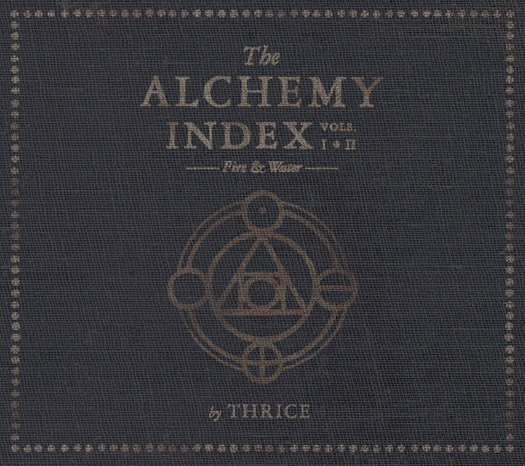 To take stock of California based Thrice’s discography is to witness the dramatic evolution of a band perpetually committed to pushing their own creative boundaries, taking their music to new and breathtaking heights of expression and challenging fans to explore each startling soundscape the group conjures, while simultaneously promoting social awareness and change. From the raw power and technical onslaught of early records Identity Crisis and The Illusion of Safety, to the perfect marriage of fury and melody on The Artist In The Ambulance, to the bold, mesmerizing experimentation of Vheissu, Thrice has always been a band on the cutting edge, running well ahead of their peers. That divide is about to widen still further.

The Alchemy Index, a four-volume collection spread between two releases comprised of four EPs, each devoted to one of the classical elements in nature—fire, water, earth and air—with each EP sonically and thematically tailored to evoke the atmosphere inherent in its corresponding element. This fall marks the release of the first two volumes of the series—Fire & Water—while Earth & Airare scheduled for a spring debut. For Thrice, it’s the realization of a year-long process of writing and recording, which was done primarily in the band’s own studio and engineered by guitarist Teppei Teranishi, without the assistance of an outside producer.

Thrice fans will likely find the thundering strains of Fire to be the most familiar of the four EPs, with the kind of blistering riffs and captivating melodies the band has built a career upon. From the opening bombast of “Firebreather” to the towering, unforgettable « Burn the Fleet, » with its Elliot Smith meets Isis vibe,Fire exhibits a Thrice who still know how to punish with decibels, and with greater force and impact than ever before.

Although completed, the Earth & Air installments of the series will emerge in the spring, after listeners have had a chance to fully absorb the first half of theAlchemy Index’s massive, multi-layered complexity. A milestone offering from a band with so much still left to explore, the success of this seemingly daunting effort hints at the potential for even more challenging, yet wholly unpredictable, creations in the future.

On The Alchemy Index, Thrice destroyed the rock rulebook and created their most engrossing and accomplished work to date…The true evolution of a band.