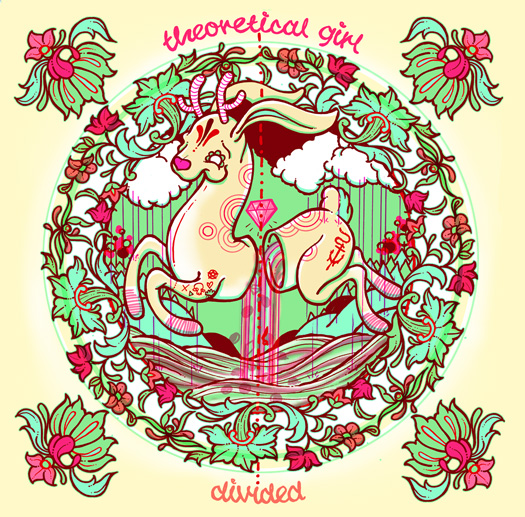 Conjured into existence 3 years ago by Southend-on-Sea siren Amy Turnnidge, Theoretical Girl has been busy making waves and leaving a trail of swooning hearts in her wake. And finally she is set to release her highly anticipated debut album.

Take recent single, ‘Rivals’, a song that is both heartbreaking and danceable in equal measure, where swooping strings and delicate vocals, offset a tale of friendship disappointed, the regret and calamity of binds unbound. Or the title track itself, where sweet chamber pop is overlaid with the mantra “Our love is unrequited, We’ll always be divided”, repeated to the point of psychosis. Other standouts include live favourite ‘Red Mist’ all ESG groove and feminine aggression, and ‘I Should Have Loved You More’ where self-recrimination is set to perfect sunshine-pop.

Amy professes to take inspiration from such diverse sources as 60s girl groups, Tom Waits, Billy Joel, Purcell and even the classic twee pop of Sarah Records, and her hands on approach is surely a testament to her DIY roots – when she’s not multi-tasking on bass, keys, guitar and vocals she’s arranging and scoring the strings. As further evidence to her song writing talent, the tracks sound equally as special when stripped down to just her sweet voice and acoustic guitar, as they do when performed live with her full backing band The Equations.

With the album out in August, plus her debut Glastonbury performance lined up, Amy’s come a long way from her DIY roots back in Southend. And she wants to keep pushing it further: “I want to keep writing, keep playing, keep adding to the live band and end up fronting a full orchestra”. Which at the rate she’s going won’t be too long. Listen and swoon…