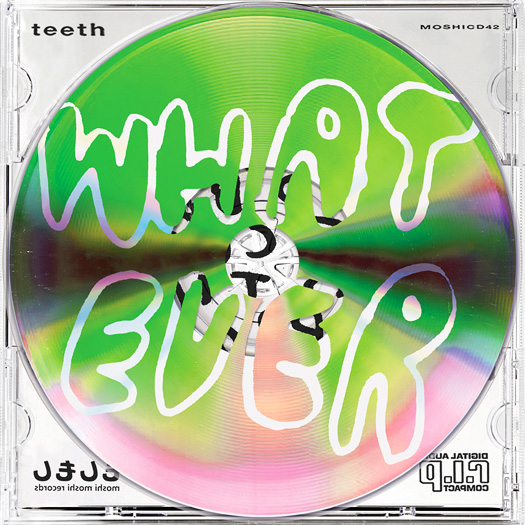 London’s premier electronic punk band, TEETH, rose to infamy at breakneck speed since their forming in 2008. Consisting of composer Ximon Tayki, vocalist Veronica So, and drummer Simon Whybray, TEETH enraptured a global audience with jubilant, no-rave jams and hacker dance anthems. Their much-anticipated LP debut WHATEVER will be released on Moshi Moshi Records in September 2011.

Bent on demolishing stages at night clubs, festivals, and warehouse parties with as much distorted noise as smooth synth melodies, TEETH deliver with an unapologetic edge. Their lo-fi, noise-pop assault is coupled with So’s equally dynamic vocal performance that suggests a cross between a euro-pop princess and a riot-grrrl. The stroboscopic hi-NRG live shows and relentless online persona make TEETH incomparable amongst their contemporaries, although media outlets like Dazed and Confused state TEETH are “artier than Crystal Castles, more epic than Battles, [and] cheerier than Throbbing Gristle.”

TEETH’s less-than-glamorous beginnings in their Dalston Lane Squat basement consisted of one IBM Pentium 3 laptop, a headset, a microphone, and a skeletal half-electronic drum kit. Recording whatever spilled out of their rehearsal sessions, TEETH made numerous online free releases such as FREE JAMZ FOREVER, Free Willy, and The Only Thing That Will Remain the Same is Your Beautiful Soul.

Pitchfork picked up on the early track “Totally In My Way,” a song only played once (and perhaps never again), and compared it to the work of LCD Soundsystem founder James Murphy. The trio played extensively for two years in East London alone, but continued to procure an international following. TEETH’s early demos were eventually collected on the Jammers EP released on tape by MÏLK Records in March 2010.

After garnering much deserved attention from every music magazine, blog, and DJ, TEETH released their first 7” single “See Spaces” on Moshi Moshi Records in August of 2010. Hailed as “a nastier Yeah Yeah Yeahs and a subtler Melt Banana” by the 405 and boggling the minds of critics who attempt to pin down their multitude of styles as “…acid rave, dance-hall, pop, punk, grunge, acid house, tropical and all out weird shyt,” (MTV UK).

The “See Spaces” video premiered on The Fader and featured Veronica So in a black void being enveloped by what appeared to be alien goo, or vibrant neon green slime á la Nickelodeon. The pixelated, single-take video followed in the vein of punk and D-I-Y aesthetics thanks to director Ollie Evens, who’s filmography includes videos for Gossip, Klaxons, and The Knocking Shop.

TEETH’s ever-evolving and notorious internet presence continues to frustrate the media and hook fans. TEETH joined twitter (@T3ETH) in September of 2009 and immediately created controversy after impersonating famous writer Will Self for nine months–only ceasing out of boredom–and posting self-crafted faux BBC articles. In November 2009 Ximon hacked Lady Gaga’s account by guessing her password. He greeted her 1.5 million followers with “Hay my babies!!! LOVE GAGA??? LOVE T33TH!!!,” and “I swear my dick is not as big as T33TH’S!!!! POPWRLDSUCKZ!!! PUNX UNITE!!!! <3.”

This is only the tip of the iceberg, as their incessant perpetuation of cyber-culture and meme generating defines TEETH as online trendsetters appealing to a growing culture of ironic youth. Countless witty cross-references and in-jokes prove these synth-punkers are as media-savvy as tech-savvy; taking them beyond the realm of temporary relevancy into an iconic, definitive example of a generation.

Admist the media praise and growing popularity, TEETH sent VICE a mixtape for the year 3010. Early versions of tracks “Confusion” and “Pill Program” recorded with Eddy Frankel (Cutting Pink with Knives) were released on Deathbomb Arc’s Digital Singles Club in early 2011. The band went into the studio with producer Dreamtrak to record their debut album WHATEVER.