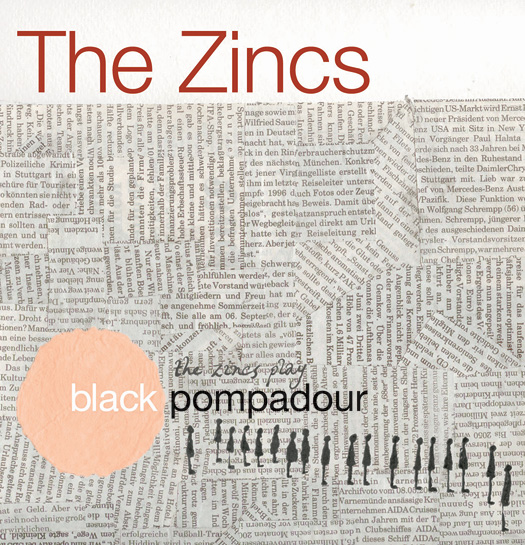 Lead by expatriate Jim Elkington (of the British-based bands Sophia and Elevate), The Zincs play brooding pop music rooted in the mysterious sounds of America and Britain to which the band grew up listening. In 2000, Elkington was lured from England by Chicago’s lush music scene and began to experiment with the songwriting style that would lead to his forming The Zincs. Armed with a guitar and a clutch of John Cale records, he set to work entirely on his own for the first time, choosing to give himself a band name that could act as a catch-all for any combination of different situations. The Zincs’ debut album, Moth and Marriage (Ohio Gold), was recorded solely by Elkington; it was not until after this release that the live band began to solidify. With this, The Zincs evolved into Jim Elkington on guitar, keyboard and vocals, Nathaniel Braddock (Ancient Greeks, Butchershop Quartet) on 6 and 12 string guitars, Nick Macri (Bobby Conn, Euphone) on electric and upright bass and Jason Toth on drums.

Dimmer, The Zincs’ second full-length album and first on Thrill Jockey, is a documentation of how the band has developed over the last few years. It was recorded over ten days in October 2004. Basic tracking was recorded and the album was mixed with Barry Phipps at North Branch Recording Studio. Vocals and additional instrumentation (i.e. mellotron, strings) were recorded at Mayfair Recordings with engineer and co-producer Mark Greenberg. Guest appearances include Janet Bean (Freakwater, Eleventh Dream Day) on backing vocals, Susan Voelz and Fred Lonberg-Holm on strings, and Mark Greenberg with the cat scratching percussion on « A Colt’s Tooth ».

Named after Elkington’s self-confessed « darker and more doltish » lyrical approach, Dimmer exemplifies Elkington’s ability to rarely take himself too seriously. His dry sense of humor is evident with lines like « Life, life is long, what doesn’t kill me only makes my life longer » from « New Thought » and in « The Meagre Prick » Elkington lets loose about « the things that really matter »: how to write a sermon, being a bad dancer, leaving your friends behind and acting like a baby in your thirties. Dimmer also showcases a wide range of songwriting styles. The songs « Bad Shepherds » and « Passengers » are influenced by 60’s English and American folk music, from Pentangle to Michael Hurley, while « Beautiful Lawyers » marks a transition from older, more familiar acoustic material towards a more layered blend of guitars and electronics. These electronics have been brought into the band partly through Elkington’s solo performances, in which he uses the computer heavily to give his acoustic songs an entirely new character.

At the core of Dimmer lie Elkington’s soothing vocals which land somewhere between Leonard Cohen and a hangover-ridden David Bowie. His vibrato-tinged, baritone voice floats effortlessly over Spanish style guitars and melodic keyboard bleeps and drones, setting the tone of the intimate album. Braddock’s guitar parts act as perfect counterpoints to the songs’ melodies and themes. From the plaintive tones of « Sunday Night » to the driving chords of « Breathe in the Disease », from the exuberant « Moment Is Now! » to the melancholic « Passengers », the interplay between Braddock and Elkington draws in the listener. As the « longest surviving member of the band », Macri’s versatility and restraint is on display throughout the album, while Jason Toth’s understated playing makes a perfect backdrop on which to hang the other instruments.

Wrap yourself in the warm embrace and wry humor of Dimmer. The Zincs know what you’re going through and would like to help.