BEER IN THE BREAKERS 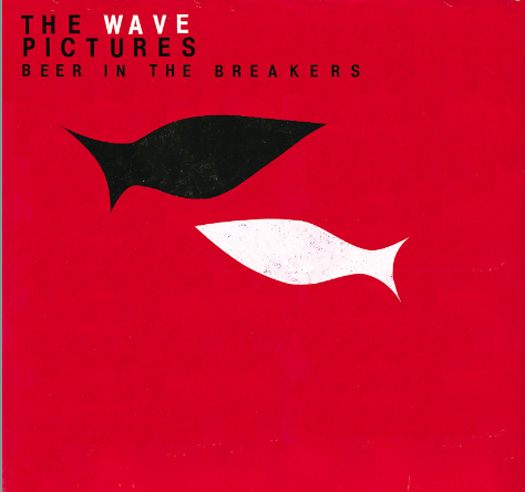 One of the most hardworking and prolific bands in the UK, The Wave Pictures, return with a new album Beer In the Breakers on April 18th on Moshi Moshi Records.

Produced by their friend and frequent collaborator Darren Hayman of Hefner, the album was recorded entirely live in one day at Hayman’s house in Walthamstow.

As main man David Tattersal explains – “We’d been enjoying playing together live more than ever on recent tours and simply wanted to record the band the way it sounds these days. When you do things live, you obviously sacrifice perfection in the hope that instead you will capture these kind of strange and glorious spontaneous moments that musicians create together, that no one could do on their own, and that you can only get with live performance.  It was probably the happiest record experience we have ever had.”

The songs featured here embrace Tattersall’s love of E Minor – Now Your Smiles Comes Over In Your Face and title track Beer In The Breakers;  Bass player Franic’s favourite clothing brand – Blue Harbour – a tale of love in Coney Island; are inspired by band favourites like Otis Rush – Blink Back A Tear;  and include re-workings of songs written in Tattersall’s youth – China Whale Brand and In Her Kitchen.  The first single from the album will beLittle Surprise, a track whose upbeat melody belies its dark, poignant lyrics.

The Wave Pictures have defiantly trodden their own path, mining the lost essence of British indie across their critically lauded debut 2008’s Instant Coffee Baby – short listed for the Guardian New Album Award and featured in many an end of year poll – and the follow up If You Leave It Alone.

Dave Tattersall, Franic Rozycki and Jonny ‘Huddersfield’ Helm are fixtures on the live circuit, crisscrossing the UK and Europe on a regular basis, renowned for their electric performances featuring Tattersall’s blistering guitar solos.  As far as Moshi are concerned – “they’re possibly the best live band we’ve ever worked with.

PRAISE FOR THE WAVE PICTURES……

“Lyrically, The Wave Pictures turn on a dime. They can zip from the richly observed into amusingly confessional into a Lewis Carol flight of fancy.” 8/10 NME

“The Wave Pictures are currently conjuring the most gleeful, magnificent pop in town.” – GUARDIAN

“At their helm The Wave Pictures have a writer who captures expertly the bitter romance of British life.” – ***** TIME OUT

“They’re making quintessential, embrace-able indie, and their ‘everything is essential’ streak continues.” – 8/10 ROCKSOUND

BEER IN THE BREAKERS TRACK-BY-TRACK, BY DAVE TATTERSALL

Named after Franic Rozycki’s favourite brand of clothing, this song describes a trip to Coney Island, New York, and the start of a love affair. People often want to know if our songs are made-up or autobiographical. The truth is usually that they are a mixture: a little bit of a real life and a lot of fiction. But this is one case where I can say that this song is completely true, that every word of it really happened.

NOW YOUR SMILE COMES OVER IN YOUR VOICE

This is my idea of a quintessential Wave Pictures song in E minor. When I wrote the lyrics I was thinking about a very dear friend of mine, and the way a person lights up when they tell a funny story from the past. Franic Rozycki’s bassline really makes the song, made even better because he pulled it out of thin blue air for this take. I’d rather hear some mistakes and improvisation on a record, just to make it sound lively. Too many bands sound completely dead to me, in a polished way. We wanted to do something in the exact opposite way from all those modern records we don’t like were made.

I wrote these lyrics in a bar in Munich, hungover, first thing in the morning. The lyrics describe a scene involving two people who work there having some kind of squabble. It’s terribly mysterious. One of them has “a little suprise up his sleeve”, but we never find out what it is. I know, of course, but I’m not telling. Musically, Little Surprise is quite at odds with its dark lyrics. I often quite enjoy putting dark or sad lyrics with happy, upbeat music. There is something rich about happy/sad songs.

BLINK BACK A TEAR

This Stanley Brinks’ favourite Wave Pictures song, and one of my favourite too. It is a minor key blues song in the style of Otis Rush, whose “Original Cobra Recordings” is one of The Wave Pictures’ all time favourite albums.

WALK THE BACK STAIRS QUIET

In this song a girlfriend urges her boyfriend to sneak out of the house when she hears her insomniac parents beginning to argue in the kitchen downstairs. This is without question my personal favourite recording on the album. It was originally recorded with our acoustic side-project Dan of Green Gables, but The Wave Pictures version is quite different.

This is a very old song, reprised here at the behest of Jonny Helm, as a kind of public gift to our good friend Hugh Noble, who used to play drums in The Wave Picture, and remains a massive influence on us. At the end of song, when the whole band chants “give me back my China Whale Brand”, The Wave Pictures manage to somehow sound a bit like The Fall.

Like ‘Little Surprise’ this one was written in German, and contains reference to some places there. It has nice soul-y chords and pretty thrilling guitar solo. We were very keen to put more solos on this album than on previous albums. Ever since the band started playing live in London, the guitar solos seem to split opinion more than anything else about the band. I discovered, to my surprise that they are not very fashionable, and that people consider them self-indulgent.

This is the album’s other old song. When you hear Beer In The Breakers, you get to hear me covering myself when I was 17, that’s how old I was when I wrote In Her Kitchen.

I play an acoustic guitar instead of an electric guitar on this song. There’s something very melancholy about this one. It’s set in a bar in Aberystwyth on a rainy day.

BEER IN THE BREAKERS

This is the title track of our album because it seemed to represent what we were trying to do the most clearly. It’s dark and slow, and again a quintessential type of Wave Pictures song. I love the story in this song, it’s happened to me but I don’t remember where. I found a small camp that someone had set up on a very grim stretch of beach. There were beer cans and a long-gone-out fire. It didn’t feel like anyone would have a party there, it felt like a very lonely soul had somehow ended up in that situation alone for a few nights. The feeling always stuck with me, and this song, like many of our songs, is a kind of hazy-memory song. It is, of course, in E minor.

A Velvet Underground-y chugging two chord song, every album should have one. Especially Lou Reed albums. He doesn’t always remember to do it. I don’t know why. He invented it, after all.

This song is a kind of companion song to “I Saw Your Hair Between The Tress”, a song which was on both “Dan of Green Gables” and my solo album “Happy For A While”. Epping Forest fills out a story that started there.