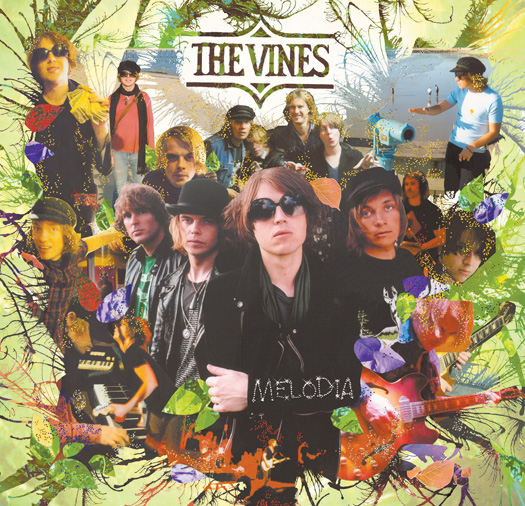 Six years is, to quote Mott The Hoople, “a mighty long way down rock ‘n’ roll”. Though it might only feel like yesterday that The Vines ram-raided their way into the public consciousness, 2008 finds them releasing their fourth album‘Melodia’.  It greets the world with the kind of blinking, wide eyed enthusiasm of  a band just out of the garage. The real story, though, is of a band who have experienced an accelerated career lived out very publicly in a whirlwind of brilliant pop records, legendary gigs and grueling world tours, breakdowns, break ups and the occasional fug of spliff smoke, enough to make lesser mortals run for the hills, never to return to the frontline …

In 2002, The Vines were at the very forefront of an exciting new rock movement around the world along with contemporaries The Strokes, The Hives and The White Stripes. Their debut album ‘Highly Evolved’, sold almost 2 million copies. Their second album ‘Winning Days’ was a less happy time for the band in spite of its quality when singer Craig Nicholls’ increasingly erratic behaviour led to a diagnosis of Aspergers Syndrome (a high functioning form of autism) and an extended hiatus as Nicholls learnt to deal with his condition. ‘Vision Valley’ saw the band re-emerge with a still fragile yet unshakably gifted Nicholls starting afresh. His gradual rehabilitation saw the band re-emerge on to the live stage again with a series of outstanding festival performances in Australia and the UK in 2006 including Big Day Out, Reading and Leeds. 2007 was spent writing and rehearsing songs for what is now known as ‘Melodia’.

No one really had the right to expect to find The Vines in such rude health, but with this album, the band are ready to drop back in where they started. The record, recorded again with Rob Schnapf (‘Highly Evolved’, ‘Winning Days’) in LA, sees the band pushing themselves to the polar extremes of their sound – pummeling, speedball fired demento rock amped up to the Nth degree (with the likes of “Manger”, “Get Out” & “Scream”) while bucolic pop is allowed to tranq out into classically beautiful lazy day territory (“A.S III”, “True As The Night” & “Orange Amber”). Twisted psychedelia? Album closer “She Is Gone” is a mesmerizing, circular riff that soars skywards into the stratosphere, all rippling guitars and angel’s sigh vocals. Pure unadulterated gonzoid rock ‘n’ roll? Recently debuted first single, “He’s A Rocker”, arguably their finest two minutes and four seconds since “Get Free” (actually that was two mins seven but who’s counting?).

The next stage of The Vines career begins here and it’s a safe bet to say that anything goes. In fact, based on the last six years, it’s possibly best not to assume anything other than it’s going to be a hell of a ride …