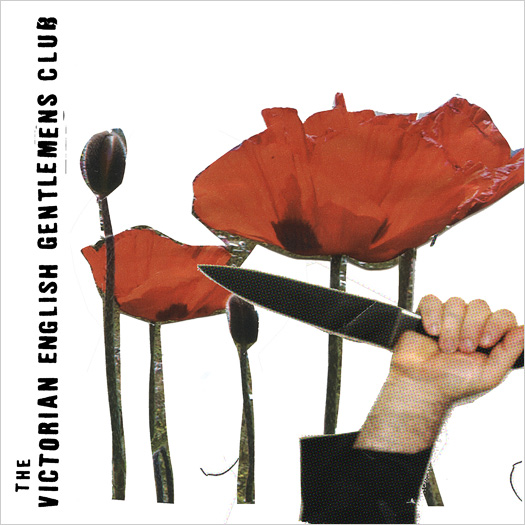 The Pixies, Sonic Youth, The Beatles, The Fall and other forms of shambolic rock.

going to eat your face off onstage, what it’s like to drink beer with lesbians in church, why they sing the bits they can’t play, why their album is based on being a drunken

musical pirate, why they don’t write songs about breaking up with their boy and girlfriends, why freaks and old men like them and why it’s ok for rock bands to have a sense of humour.

The Victorian English Gentlemens Club is not Victorian, English or a Gentleman, but it is

formed of three people who are in fact English. (But still not Victorian, gentle or even men.)

ADAM stabs at your ears with his guitar and says: “Being in our band is a three-way argument that has worthwhile results. My lyrics carry themes of obscurity and surrealism, but retain a sense of tradition and truth.”

EMMA hits things hard with sticks while looking fabulous in vintage evening dresses and jewels, and says: “I like drumming and singing until I feel sick.”

LOUISE stamps holes in the fl oor with her big black boots while attacking her bass and silently emitting laser blue death ray glares from her irises.

All three aimed to be in a band, so took the logical step of leaving their respective homelands (Birmingham, Shrewsbury and North Yorkshire) and going to art school. But there was no New Cross luvviness for this troupe of art rocking rebels. They opted instead for that other hotbed of culture and coolness: Cardiff. Why? “We thought it was by the sea, but it’s not. It’s by an estuary,” says Emma.

The band’s RSI inducing name was coined by Adam’s then painting teacher, who thought he had nurtured a new art movement thanks to his class’s untypical and somewhat traditionalist taste for painting still life. Thus, the Victorian English Gentlemens Club was born.

Their awkward song structures and odd rhythms come from their desire to make uncompromising and intriguing music, but also from the fact that they learned to play their instruments together. They had freedom to create sounds that sounded like them, since, because they had taught themselves to play, only they could make them.

Lyrically, they cite questions as their main inspiration. “Songs usually start as something that puzzles me,” informs Adam. “For example, in “Under The Yews”, I was curious about what happens to dead babies. How old do you have to be before they can bury you? “My Son Spells Backwards” is about the amount of kids with dyslexia. A suspicious number of free computers are given out nowadays. Perhaps it’s more about parents not admitting they have stupid children. “Ban The Gin” is about the gin ban in 18th Century England. Gin was blamed for all of society’s ills because it was cheaper than beer and everyone was wrecked. Prostitutes were sleeping with everyone and leaving dead babies in the streets, incest was rife, people were drunk before breakfast and morality was generally declining… All these things were blamed on gin. It didn’t make much sense though. It wasn’t gin’s fault.”

All of these songs and more are included on their debut self titled album which was recorded in The Fortress in London with Gareth Parton (The Go! Team, The Pipettes). The band marvelled at the luxury of listening to things properly, as well as making noises in unorthodox fashions: through walkie talkies, under blankets in cupboards, smashing pianos with bits of wood… “It’s the total opposite of playing live,” says Emma. “Recording is about detail and experimentation but playing live is all about adrenalin, calamity and energetic madness. Things can go wrong and frequently do. We’ve had blown up amps, broken teeth and a fair amount of falling off the

TVEGC like to appeal to as many different people as they can without becoming hyper pop or changing their sound. They’d like to play in a castle surrounded by kettles. And they’d like you to buy their record, even if you’ve already got one for free.