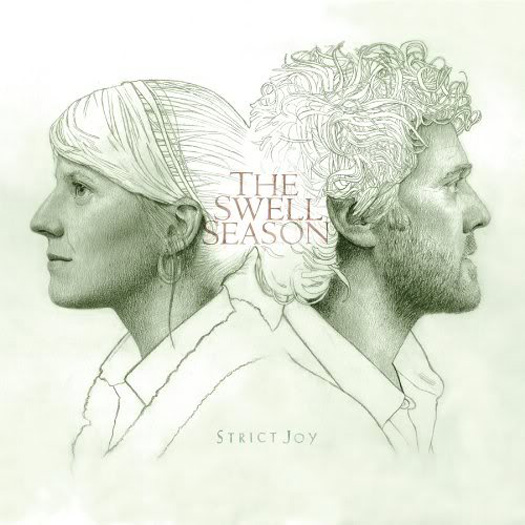 In the case of Glen Hansard and Marketa Irglova who go by the nom de plume, The Swell Season truer words have never been spoken. For many the duo shot to fame overnight after performing on the 80th Academy Awards and taking home the Oscar for their song, “Falling Slowly” from the film “Once”. The movie seemed to cross generational lines and spoke to anyone who had ever lost at love and life, yet still held out hope that something good was possible.

“Once” centred on two star-crossed musicians, him a Dublin street busker, her a pianist from eastern Europe, who in the course of a brief few weeks make a record, fall in love, decide against acting on it and go their separate ways. The film, shot in two weeks in Dublin without permits on a few handy cams, made their adventure all the more unbelievable. As buzz around the film grew so did the belief that their characters, “him” and “her” were indeed the lives of Glen and Marketa. In the public’s eye, the movie had become their life, but in fact for them life was becoming something altogether unrecognisable.

Glen and Marketa met through her father, a concert promoter in the Czech Republic. Marketa, a classically trained pianist, began performing with Glen’s band, The Frames when in town and eventually they began to collaborate. The opportunity to write songs for the film offered them their first opportunity to work professionally together. After recording a batch of songs for the movie, the two chose to release a handful of them as their debut record, The Swell Season in Fall 2006.

Widely credited to their given names, and taking its name from a novel by Czech writer, Josef Skvorecky, they fully adopted the moniker The Swell Season when they started performing live. A short tour of the U.S. found them playing small clubs filled with fans of Glen’s band, The Frames. On a personal level the tour was a huge success. For Marketa it was the realisation of being on tour, playing music and traveling the world. For Glen it was the stark contrast to his existence as a “Frame”, and creatively there were so many new possibilities with Marketa. Upon completion, it was back to work for Glen with The Frames, who had a new record “The Cost” to support. The two vowed to revisit The Swell Season when more time arose. That time would turn out to be after “Once” became the surprise hit of Sundance 2007 and won the World Audience Cinema Award.

“Sometimes you spend your whole life trying to climb over a wall, hoping to make it to the other side, only to find that by turning and walking away from it, you can walk around the whole world and eventually you’ll end up on the other side. Exactly where you wanted to be in the first place.” – Glen Hansard

“If you flirt with success, don’t be surprised if it offers you sex” – Marketa Irglova

The music was there first. Acting in the movie was born out of necessity otherwise the movie wouldn’t have been made. The plan was always about the music’s place in the movie. A broader audience is what any musician desires and the film seemed a perfect chance to bring a new audience to Glen’s music, and introduce Marketa’s. Miraculously the plan worked and people responded not only to the movie but the music as well.

2007 and 2008 were filled with constant movement; the duo performed over 250 shows worldwide and were shuffled from one promo situation to the next. Though tiring, never did they take it for granted, embracing each new endeavour with excitement and gratitude. Each night became another victory for Glen after twenty year stop/start battle with the music industry at large. For Marketa each day held a new experience on a journey from obscurity to notoriety.

After shows they spent time with fans signing autographs, taking pictures, and hearing stories about how the movie and its music impacted on someone’s life. It was magical and challenging at the same. There was an expectation that the characters from the movie would be realised on stage. The power of celluloid was on full display and it was a heavy burden to shoulder. The whole experience was being documented in the new songs the two were writing as they tried to be true to themselves and each other. Somewhere along the way they become a couple like in the movie. And maybe they fell in love. And out of it. Only they know.

For, as he meditated misery and cared it into song-Strict Care, Strict Joy! – James Stephens

Strict Joy was made over a series of three sessions (August 2008 to April 2009) under the steady ear of Peter Katis (The National | Interpol). Katis came recommended by friend and sometime collaborator Thomas Bartlett (Doveman). The initial session yielded the foundation for what would become the record with every song from it making the record. “Low Rising”, “Fantasy Man”, “The Rain”, “I Have Loved You Wrong” and “In These Arms” were laid down with a few of those having been performed live regularly and so they were off and running.

The second session produced “The Verb”, “Two Tongues” and “High Horses”. As with the first session, the two were joined by Frames members Colm Mac Con Iomaire, Joseph Doyle, Rob Bochnik and Graham Hopkins. The last session proved to be the most adventurous and helped bring the record squarely into focus. Glen and Mar were joined by a group of musicians they’d never played with before, Thomas being the lone exception. Thomas is quickly losing his secret weapon status in NYC having become the ‘go to’ guy for Martha Wainwright, Antony and the Johnsons and The National, along with his own project Doveman. Javier Mas joined the recording after Glen blindly solicited him having witnessed his mastery on stage with Leonard Cohen. His trademark Spanish guitar fills on tracks like “Paper Cup”, “Feeling the Pull”, “Back Broke” and “Love That Conquers”. Chad Taylor and Chris Lightcap made their names on the Chicago and New York jazz scenes and brought new perspectives and a fresh energy to the record. It was this creative burst that helped bring the finishing touches to Strict Joy.

Remaining firmly rooted in the time-honoured themes of hope and love, heartache and loss, Strict Joy does it’s best to address the impact of the last two years. In the end, it may provide more questions than answers about the relationship at its centre. Opening with “Low Rising”, our protagonist tries to get off on the right foot, imploring his lover to “sit down and talk, pull back the veils and find out what it is I’ve done wrong”. He wants to “come up” using her love as the springboard. If only things were that easy. Love is complicated. Breaking up is even more complicated. Perhaps summing it up best on “Fantasy Man” Marketa sings, “its the story of two lovers, who danced both edges of the knife”. As direct an indictment on lost love as has been made in some time.

All is not lost though as both resolve to keep on trying. On “In These Arms” they sing “maybe I was born to hold you in these arms”. A hopeful sentiment that pops up throughout and truly gives heartache a run for its money. “Feeling the Pull” constitutes one of ‘Strict Joy’s lighter moments, the duo yearning for a simpler time, in which they follow nature and “head out on the road”. A compelling ideal in these troubled times.