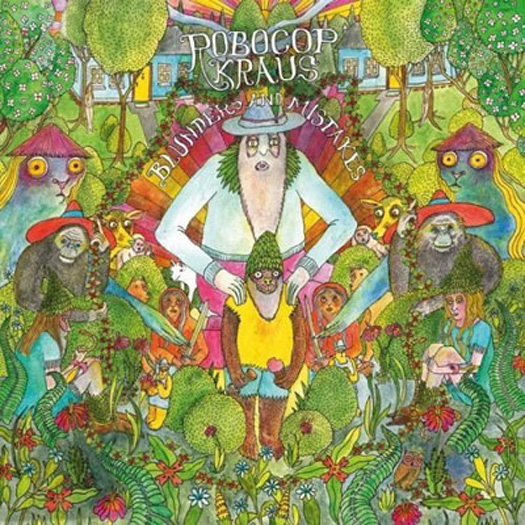 THE ROBOCOP KRAUS were formed by Thomas Lang, Matthias Wendl, Johannes Uschalt and Roman Maul in Hersbruck (Nuremberg) in 1998. The line-up changed shortly afterwards when Maul left the band to be replaced by Tobias Helmlinger on Bass and Markus Steckert joined on the Organ. Their first release followed shortly afterwards: a Split 12“ from the band The Cherryville, appeared on Swing Deluxe Records, a label founded by Uschalt and Lang. Studio time of 3 days had to be enough, the songs were in the bag after only seven rehearsals.

After the first German Tour (with the small band Yage) the band released their first full length album (again on Swing Deluxe). The Vinyl-only release Inferno Nihilistique 2000 is, according to the band, a concept album about the impending end of the world. The positive response of the European press was intensified by copious tours through Germany, France and Spain. The self produced video to the song Poor Soul Relax, which appeared on the Swing Deluxe Compilation Achtung Autobahn, was shown on VIVA 2. Instead of resting on their laurels, at the beginning of 2001 the band released a new album. Tiger, which was released on the Czech Underground Label Day After Records, was the first worldwide release of the band and was a
combination of everything the early ROBOCOP KRAUS was. A US-American underground and British post punk sound with, poise, daring and an obvious love to play music. The band subsequently went on tour through Germany, France, Holland, The Czech Republic, Poland, England and Ireland. A year later a double-CD Compilation followed with the title “As Long As We Dance We Are Not Dead”, which consisted of the rare and unreleased material and songs from the meanwhile sold out Inferno Nihilistique 2000. The band continued their tour with the New Yorkers, The World Inferno Friendship Society, and went on a Headlining Tour to Japan in November.

In 2003 the band surpassed themselves with a both experimental and anthem-like Living With Other People, which was released on the highly regarded Label L’Age D’Or. The opening Fake Boys convinced the even very difficult to impress British market and was played on BBC Radio 1 by Zane Lowe, Steve Lamacq and Colin Murray. The magazine NME was very enthusiastic about their „inspirational, imaginative Post-Punk“ and Fashion was described as „a simply brilliant single“. The reaction was euphoric worldwide and smashed all the undeniable prejudices against German Indie Rock (which is usually considered unimportant to the rest of the world). Suddenly THE ROBOCOP KRAUS were competing as international contenders.

In February 2005, after the departure of founding member Johannes Uschalt the band recorded their fourth album, with long time friend Hans-Christian Fuss on drums, in the legendary Groendahl Studios in Stockholm. Pelle Gunnerfeld, Producer of The Hives, one of the worlds biggest success stories, helped develop the sound on They Think They Are The Robocop Kraus with the band, the first album that was released by the worldwide Californian Label Epitaph. The singles In Fact You’re Just Fiction and You don’t Have to Shout were played by MTV and radio stations over and over again, the press went crazy (The cover of Spex, a feature in Insound) and the tour affiliated to the album was the most successful in the bands history. The Robocop Kraus toured for nearly a whole year, non-stop through Europe and the rest of the world. There was hardly one club they didn’t rock, barely one festival they didn’t play; They were headliners at the Primavera Festival (2006) and Benicassim (2005) in Spain, Their friends Art Brut took them on tour twice in the United States, they even went to Canada and Russia and their reputation as the best live band in Germany was then written in stone. The fact that this never ending tour could have some negative affects is obvious, but that only became clear to the musicians when they were already and the point of total exhaustion. Bassist Tobias Helmlinger left the band, this unavoidable break allowed the other band members to contemplate the situation and to summon strength.

The new album Blunders & Mistakes marks a new beginning for the band. There is a new man on Bass, Peter Tiedeken. There is also a new sound, the band is more experimental and pushes the musical boundaries of the band cosmos further. Working with Tobias Levin und Adam Lasus (Clap Your Hands Say Yeah, Yo La Tengo, Helium) also had an affect on the new direction. Everything that we thought was great about The Robocop Kraus is there again, the anthems, the melodies, the emotions, but there is also another side to discover, a new atmosphere, and a love of musical details, that has never been heard from them before.