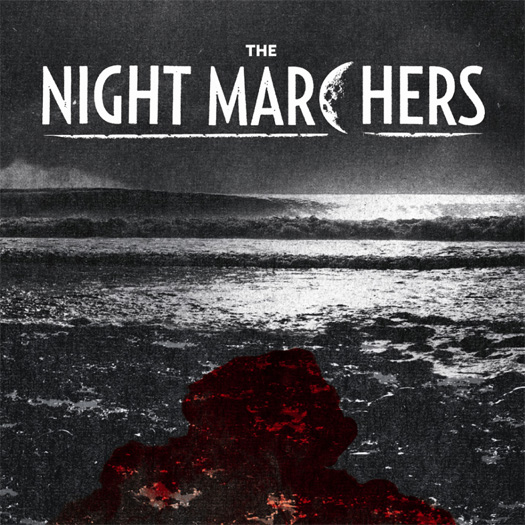 After inventing stainless steel and « Ass Kicking Rock and Roll » ™, here they go again reinventing the MP3! It’s a new year and another handful of mind-blowing rat turds are flung at the “scene.” Your iPod never sounded as crispy. Ladies and Gentleman….I present to you the next SoCal, mall punk, stupor group; THE NIGHT MARCHERS!  Apparitions of modern day street warriors that manifest in the neglected corners of subterranean, Rock ‘n Roll lore.

Take Speedo (ex Rocket from the Crypt barker/broom swinger, Hot Snakes riff architect, Drive Like Jehu octavarian, The Sultans booking agent, Pitchfork stylist, and lest not forget Swami Records honcho humungous and KBZT 94.9 FM DJ to the stars). Then add the black Irish of Gar Wood (ex Hot Snakes subsonic maestro, current Beehive and the Barracudas legal representative, White Apes roadie and merchandise coordinator, and of course, I would be remiss to not mention his ongoing contributions to the field of recording science at the helm of Strange Sounds recording studio). Now reinforce these bad intentions with Thee Mount Olympus of all rhythm sections. Literally, an all-Greek powerhouse suspended by Ionic fortitude and bathed in a distilled olive oil suitable for the same rectal lubrication that eased in democracy and the Olympics. J. Sinclair K. propels these files with the same vintage overload he brought on the drums while steering Hot Snakes, Delta 71, Bardo Pond and Mule. At the ripe young age of 56, newcomer Thomas Kitsos, aka Titus Gangbangus of CPC Gangbangs fame, lays a heavy pipe on the four string bass guitar. Tommy recently relocated to San Diego from Montreal where his father owns and operates a Greek Restaurant, and his mother is a witch/fortune teller. After one listen to the band’s earliest demos, the Department of Naturalization & Immigration granted Titus a green card with no questions asked. A quick Wikipedia search will tell you no less.

See You In Magic is THE NIGHT MARCHERS’ first record. The band entered the newly constructed City of Refuge studio in the fall of 2007 and emerged with these downloads. The studio’s black lava walls are located under the landing flight path of San Diego International Airport, so the sound of jet engines can be heard throughout the files.  Recorded by Dave Gardner (Magneto Mastering, debonair, Midwest bass player and long time Swami collaborator), extra care and attention was spent getting the tastiest data possible. From the Byrds-cum-Wipers barrel of “Jump In The Fire” to the vibrating Bo Diddley meets Dez Cadena of “Closed For Inventory” or The Nervous Eaters meets Backstabbers’ beat sleeper known as “You’ve Got Nerve,” this record is a collage of Speedo’s favorite guitars, guitarists and guitar stories. Although this listener can whiff on the faint aroma of Flamin’ Groovies, The Nerves, Status Quo, Black Merda and similar black acid jams, it’s all filtered through a tight quartet who lacerate with the calculated attack of a small, Japanese whaling operation.

THE NIGHT MARCHERS have plans to scour the nightclubs of the world for converts to their hybrid “Rock Or Roll” enlightenment.