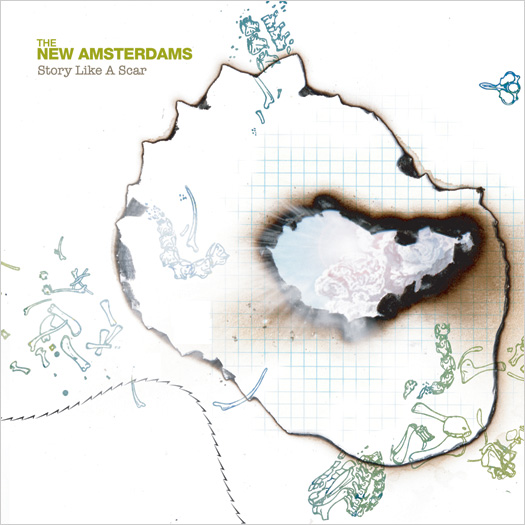 “[The music of The New Amsterdams’ Matt Pryor] bears the distinct sound of an indie vet in reflection.

With a heavy heart, he sprinkles in couplets for past lovers and corner bars over cotton-soft

rock tracks that breathe and shimmer.”

The New Amsterdams’ new album, Story Like a Scar, breathes like a breeze across the prairie and shimmers like the sun on the Kansas River. Not that the band’s lyricist, Matt Pryor, was consciously evoking the Kansas locale he calls home. Still, lines

like, “It echoes in the hills,” “midnight on a dirt road” and “a secret concealed in the wheat fields” conjure an unmistakable sense of place.  “Where I live is a very big part of who I am,” Pryor concedes. He says “A Small Crusade,” the standout closing track on Story Like a Scar, is a metaphor for finding his home, in Lawrence, situated on the Kansas River. “I tricked my wife into moving here,” he deadpans, “and eventually, she found her home here, too.” Home is more than coordinates on a map, of course, and perhaps the album’s most heartfelt testimony to that truth is the chorus of “Turn Out the Light”: “I’ve been wrong, but it’s alright/ There’ve been long and lonely nights/ I’ve been lost, but I found you/ Turn out the light/ I’ll stay if you want me to.” The song speaks to the emotional meaning of home. “My job requires me to travel,” says Pryor, whose been on the road since he was 18. “It’s really hard for me to be gone, but it’s even harder on my wife and kids. ‘Turn Out the Light’ is an acknowledgment of that.” Returning to “A Small Crusade,” he reckons: “Sometimes you have to scrap everything to find yourself. That’s what coming to Lawrence has been for me. The experience of building a family and becoming part of a community has been very cathartic for me. It’s helped me through some things. I guess it’s no coincidence that ‘A Small Crusade’ is the most spiritual-sounding thing I’ve ever written.” Additional insight into this state of mind is afforded by Pryor’s comments about his bandmates – guitarist-singer Dustin Kinsey, bassist Eric McCann and drummer Bill Belzer. He says of their collaboration, “We’ve all been carrying this around, but we needed to find each other before we could lay it down.”  They laidStory Like a Scar down in Nashville (in six 14-hour days) with producer Roger Moutenot (Yo La Tengo, Freedy Johnston, Elvis Costello). And though the disc boasts lap steel, banjo, harmonica, stand-up bass and brushed drums, this is not country music. For lack of a more elegant term, it’s roots rock. Story is woven of a live, organic, first-take sound and a recording philosophy that embraced imperfection and the unexpected. Pryor’s voice might best be described as “low lonesome”; it’s not the hair-raising “high lonesome” tenor of bluegrass icons like Bill Monroe and Ralph Stanley, but it bears a similarly forlorn quality, made accessible to 21st-century ears by Pryor’s lived-in, everyman performances.

His unpolished singing is part of the neat trick The New Amsterdams have pulled off with Story Like a Scar: The album maintains an emotional rawness and affecting sonic raggedness despite its complex texture – note the piano, pump organ, Rhodes, Wurlitzer and Hammond – and the practiced chops of the musicians who brought it to life. Bill Belzer toured in support of the last New Amsterdams record, 2003’s critically acclaimed Worse for the Wear.“Everything Bill does is about the music, what’s best for the song,” Pryor says. “He’s always up for learning new things and bringing them into the process.” Belzer brought McCann into the process as well. “Eric has a jazz background,” Pryor notes. “He plays the most amazingly beautiful stuff.” Evidence of this can be heard on Story Like a Scar where he takes a bow to his stand-up. “Bill and Eric and I had been doing the power-trio thing,” he continues, “but we really wanted to fill out our sound. Dustin is an incredibly versatile musician – he can play anything you put in front of him.” And though Pryor, Belzer and McCann knew Kinsey could complete their sound, none of the four was prepared for the creative synergy their union would produce. “We started messing around with the songs I’d already written, and they got so much better, like night and day,” Pryor relates. “Bill and Eric and Dustin came up with so many things I never would have thought of. We wrote and arranged the rest of the album together.” Pryor says his work with this band enables him to delegate some of the songcraft responsibilities, explaining: “Eric and Dustin, who both went to school for music, are really into the recording; they love building the songs. I’ll listen to what

they’ve done and just say, ‘This works, that works, this doesn’t work … ’ Everything’s open to discussion, but this method works so well that we’re constantly writing. Story Like a Scar is 10 steps forward from anything I’ve ever done, which has everything to do with this band. We found our collective voice with this record.” Pryor is so at home in this new creative home that he’s also been able to find shelter there for some of his experiences with The Get Up Kids, which he fronted for 10 years (he started The New Amsterdams, named after an Elvis Costello song, in 2000). Fans of that band might be interested to know thatStory Like a Scar’s “Bad Liar” is about Pryor being just that. “By the time I quit the Get Up Kids, I was miserable and everyone could tell,” he recalls. “I knew full well that I didn’t want to do it anymore, and I just couldn’t pull off the ‘everything’s great’ lie. We got drunk, they called me on it and we got into a fight. A lot of internal conflict with the Get Up Kids had to do with us not talking unless we were drunk.” Aside from the inspired lyric, “Bottle it up/ It takes a bottle to get it out,” the song ventures, “Let’s call it off/ Let’s take the memories and run/ I’ll take the bullet/ The villain with the smoking gun.” The memories recede as Pryor returns to the present. “There’s a small-town quality to this record,” he says, going back to “A

Small Crusade,” which, on the surface, is about a small-town character, a man who, after his house burns down, pitches a tent on an island in the Kansas River – the “Kaw” – and lives there ever after. Pryor sings to this man: “ … by the riverside what you saw/ Was salvation on the Kaw/ To free who you were before/ Find what you were looking for.” But we know he’s talking about himself, about finding what he was looking for, what we all are looking for, in towns of every size: Community. Family. Home.