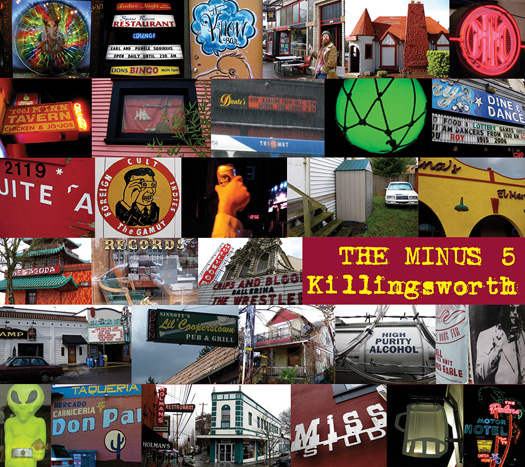 The Minus 5, led by underground icon Scott McCaughey, will be releasing a new album Killingsworth on Monday 6th July 2009.

Killingsworth is an aptly named thoroughfare that borders northeast Portland’s « Alberta Arts District », where the tracks were primarily conceived and executed. Scott’s old buddy John Moen, who has been a Dharma Bum and a Maroon and a Jick, and is now a Decemberist, wove a noose out of papyrus, and helped lasso his current bandmates and other notables to flesh out the arrangements on a dismal and disturbing array of soon-to-be-classics. The effervescent smokin’ drinkin’ Little Sue and the four ultra-stylish priestesses once known as the Shee Bee Gees provided welcome feminine counterpoint to the song cycle’s wanton depravity (it’s not truly a song cycle, nor is it a Richard Strauss tone poem, but the caliber of the material deserves a modicum of pretension). Various members of M. Ward’s combo, as well as the very great Norfolk & Western (some of them the same people), played crucial roles in delivering the goods. They were poorly remunerated. Noted novelist and Richmond Fontaine frontispiece Willy Vlautin provided a golden lyrical trampoline, and Timothy Bracy of Mendoza Line fame collaborated on the dance-floor-bound « Dark Hand of Contagion ». As ever, Peter Buck put twelve strings or less to optimal use whenever cajoled. Ken Stringfellow sang on a Scandinavian ferry, fully clothed.

Thus begins a new chapter in the Minus 5 saga. Different than the rest, yet barking up the same monkey tree. And if you have any questions or comments about the music itself, Mr. McCaughey would be glad to elucidate all over you, to the best of his ability, which varies according to the situation