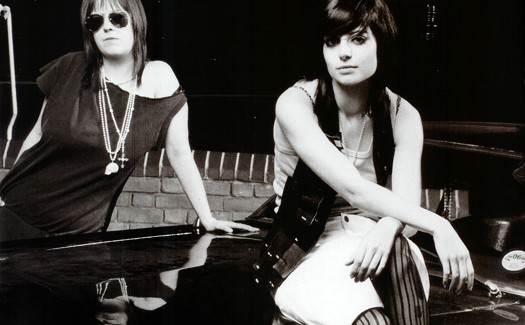 Since the release of The Ivories’ sultry debut single « Reduce The Temperature » entered the charts at no68 and the indie charts at no19, the girls have been touring the country causing quite a stir as they go. From bringing the ceiling down at koko just days befor maddonna did, performing a hectic live session for bbc 6 to setting fire alarms off mid-gig in jersey. All the while the rawkus B-sides « disappointment » and « tonight » took dancefloors across the country by storm.

Early 2006 sees a hell of a lot more touring, festivals, an xfm session and the release of their 2nd single. Watch this space! “.… a tense electric set of chopped up Joy Division baselines, twisting PiL guitar work and a lead singer who seems to have crawled out of Black Wires’ wet dreams” -Artrocker“A baby-faced singer who can howl with the best…” – Dazed & Confused. « Effortlessly sexy » -NME. « the hottest unsigned band in leeds with a razor-edged fusion of pj harvey,nick cave and siouxsie and the banshees » – The Guardian « a sleek, sexy machine that is brimming with ice cold fury. » -Evening post

MySpace Editor by Rasheed Richmond Leeds based four-piece, The Ivories recently released their debut single (Monday 31st October), on the 48 Crash label.
‘Reduce The Temperature’, intense yet infectious and already a favourite with Steve Lamacq, is available on CD and limited 7″ vinyl. Recorded at The Leopard Lounge with Black Star Liner’s Choque Hosein, vinyl copies of the single will come backed with ‘Tonight’ while the CD version will feature ‘Disappointment’, one of the highlights from the band’s live set.
The Ivories formed earlier this year when Helena Gee, promoter of local club night Release The Bats and former vocalist of The Holy Terror, joined a line-up of Emma Rowe; guitar, Cathy Russell; bass and drummer Anna Prior. Live sets are short, sharp and exciting and in recent months the band have supported the likes of The Futureheads, Eighties Matchbox B- Line Disaster, Art Brut and label mates Black Wire.