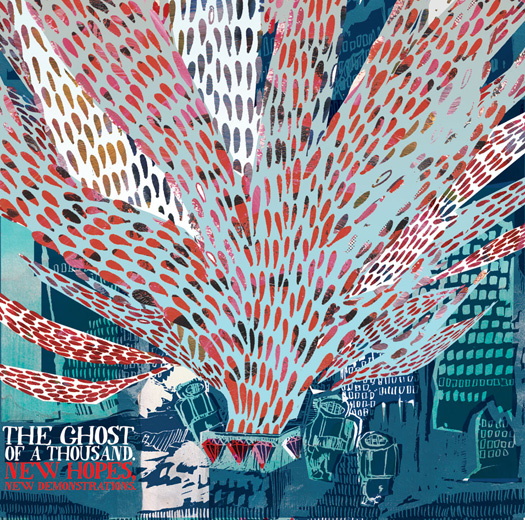 Having kicked, screamed and fought their way out of Brighton, England in early 2007 with awe-inspiring debut full-length This Is Where The Fight Begins, The Ghost Of A Thousand have rapidly become one of the UK’s most valuable and unique musical assets, thanks to their unhinged, uncompromising and utterly invigorating style. Having spent the last couple of years challenging old perceptions of what British hardcore was made of – collecting a Kerrang! Award nomination and a place in Q Magazine’s Top Five metal bands, along the way – the quintet are back with an album that doesn’t just tear up the rule book, it sets it ablaze and leaves it on your doorstep in a middle of the night drive by.

Having formed in 2004, vocalist Tom Lacey, guitarists Andy Blyth and Jag Jago, drummer Memby Jago and bassist Gaz Spencer, have relentlessly pushed themselves forward – whether that’s via a punishing tour schedule or annihilating live shows – in the pursuit of greatness. The pinnacle of that boundary pushing ethos is finally here, in the form of New Hopes, New Demonstrations – an album that steps beyond the band’s hardcore roots and squares boldly up to swaggering rock ‘n’ roll, hard rock heroism and, in places, epic opuses. It’s a record that will stand the test of time and prove that …Ghost… are in this for
the long haul.

“NHND is still very heavy,” front-man Tom Lacey explains, “heavier than …Fight… in places, but its whole feel is a lot sadder, and its mood changes all the time. This album could have been a straight up sing-a-long catchy hardcore record, but it’s very much not and I think that will come as a shock to some people. I’d like to think that the perception of us as a band within a scene will be blown apart now – the new stuff doesn’t to me feel like anything that other bands are doing right now.

“It goes from “Bright Lights”,” Lacey continues, “which is a full on R ‘n’ R beast to “Good Old Fashioned Loss”, which is very bluesy and sounds somewhat defeated and bleak. In the middle, there’s “Split The Atom” which feels like a huge risk for us – there’s no screaming at all, it’s got a very cool new-wave feel to it and the saxophone solo at the end just lights it up.
“We knew it had to be a more emotional album,” he concludes, “and we wanted it to feel like the band reveal more and more as the record goes on. It starts very bluntly and ends in a completely different place. It’s a lot rougher around the edges and it’s a lot more human. We’ve come a long way as musicians since …Fight… We’ve shifted the goal posts
with this one.”

Recorded in Stockholm’s Studio Grondahl in the winter of 2008, under the watchful gaze of Pelle Gunnefeldt [The Hives, Refused], the band knew they wanted to do something unusual from the get go.
“Pelle was our first choice,” Lacey says. “We wanted to do something different and un-tinged by gloss and glamour, and make something weird and dark. We felt Gunnerfeldt had that maniacal edge that would bring that out of us – and he did. Grondahl is a beautiful studio that doesn’t have a big TV or a pool table or any of the distractions that most do. It’s just tons of gear and a coffee machine so we were able to just concentrate on the record. It was a very calm, relaxed environment.”

In keeping with the new approach, Lacey’s lyrics have also taken a turn for the darker, after This Is Where The Fight Begins’ call-to-arms nature.
“A large majority of this record is about being a 26-year-old guy suddenly realising that all the stuff that you associate with being young and full of wonder at the world are being taken away from you,” Lacey reflects. “Parents getting sick, not being the doctor/fireman/spaceman you were meant to be, not being able to drink any more, worrying about the environment, feeling a million years old in clubs… There’s still a lot of stuff on there about being totally in love with music and how that’s your connection with still feeling 18 in some way and being ready to take on the world. But it’s taking those negative things and trying to put a positive spin on them, while accepting that the ideas you grew up with may have
been somewhat naïve.”

Even technically, The Ghost Of A Thousand adopted a new way of doing things for New Hopes, New Demonstrations, recording the album in a live setting with the whole band performing in one room together, then layering different sounds over the top afterwards.
“You expect studio time to be very precise and clinical,” Lacey says, “doing it this way was actually a very weird feeling, but it also made perfect sense. The end result is not an easy listen – it’s not the most brutal thing in the world, but we sound more like an evil ‘70’s rock ‘n’ roll band that went off the rails, than a hardcore band in 2009. That can only be a good thing in my eyes.”

New Hopes, New Demonstrations: a new sound for new times.
The Ghost Of A Thousand: a new contender to be your new favourite band.