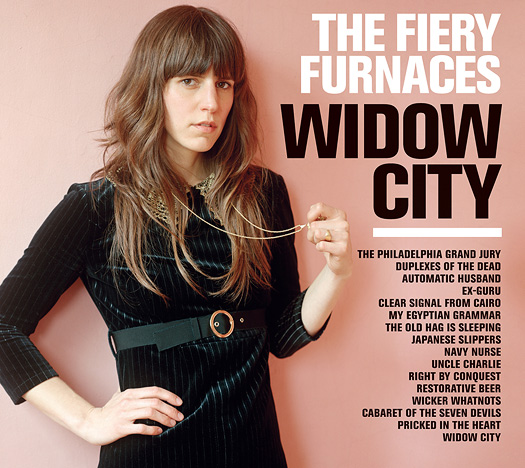 There are few things in life as exhilarating as a new album by The Fiery Furnaces. Establishing themselves as one of rock music’s most consistently engaging, exciting and thought-provoking bands, The Fiery Furnaces – made up of core brother-sister duo Matthew and Eleanor Friedberger – are well-versed in creating an album that manages to balance melody, originality, and a seemingly endless arsenal of instrumental ideas. Since their debut, Gallowbird’s Bark, was released in 2003, The Fiery Furnaces have challenged the notion of what makes a song, weaving aural fragments into ten-minute-long opuses that take any number of melodic turns. Their songs often transcend categories redefining the pop song through their rapidly changing tempos and inventive sound selections- almost as quickly as Eleanor can spit out proper noun-laced lyrical gems, often so otherworldly, that they border on magical realism. While the band’s sixth LP, Widow City, is rooted in the Furnaces’ aesthetic of challenging conventional notions of timing and song structure, the record is absolutely unlike any other LP in their expansive and brilliant repertoire. In fact, Widow City, their first for Chicago’s renowned Thrill Jockey Records, features some of the finest, catchiest Furnaces compositions to date. We’d be up for putting money on it if you don’t agree.

Produced by Matthew Friedberger over one very snowy, cold winter by Lake Michigan, engineered by Bill Skibbe and Jessica Ruffins, and mixed by John McEntire at Soma Studios in Chicago, Widow City includes the band’s first time use of the Chamberlain, a keyboard that triggers tapes loops of other instruments to create its library of sounds. The Chamberlain acts as the sole source of strings, woodwinds and harp sounds found on Widow City, and, as such, the sounds on the tapes are widows in relation to their long lost Husband recorded performances, living on and on, dressed in the audio black that is the lack of high end on these analog tapes. This idea is important to note on this recording, an LP where loss mingles with love, where husbands sit still on their honeymoon, where gurus are shunned, where words of affection are too faint to ever be carried by the winds of Cairo and more. When playing live, the band deconstructs the form of the songs on their records and reconstructs them anew for each tour; A similar approach was taken to Widow City as a whole, both within individual songs and as a linear narrative throughout the album. The overall arc of the songs as a group, as well as the transitions between songs (sometimes completely seamless), is definitely intended. Like past recordings, multi-instrumentalist Matthew plays everything on this record except the drums (played by Robert D’Amico, an essential part of the band’s live show for the last two years). The songs were inspired in part by advertisements from women’s magazines of the early 70’s, an imagined Ouija board by which Matthew might ascertain what his sister would want him to write about, and the cultural pages of alternative lifestyle weekly papers, or not. But of course, like all things The Fiery Furnaces create, to think these three elements are literally all there is to these songs and lyrics would be incredibly short-sighted. These references are the jumping off points; ultimately, the songs take us on their own journeys, through “duplexes of the dead” and “woods without berries,” to places where guitars flicker through sinewy keyboards. We’re moved by some of the deepest, head-nodding grooves found on any Fiery Furnaces album, punctuated by some of the most tempestuous musical storms found on any Fiery Furnaces album. “Ex-Guru” shimmers with one of the Furnaces’ most scintillating choruses, while “Restorative Beer” reverberates with bluesy guitar stabs contrasting the crashing cymbals that weave with the lead organ line. “Clear Signal from Cairo” is meditative and bass-heavy, and title track “Widow City” is a ballad infused with a nautical air through the instruments tipping from one side of the verse to the other. Widow City’s songs are precise, chaotic, and absolutely genius, anchored by some of Eleanor’s strongest vocal performances ever recorded (see “My Egyptian Grammar” for an idea of her range). Once you hear this record, we absolutely believe that you’ll be hard-pressed to find another album this fall as compelling, beautiful, strange, dense and magical as this one. Widow City is musical terrain entirely of their own making, and from a band as extraordinary and original as The Fiery Furnaces, we would expect nothing less