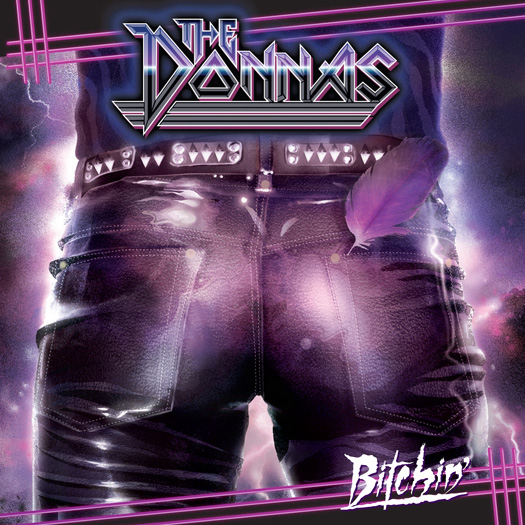 Calling all Donnaholics!  America’s rock n’ roll rebels The Donnas get back to business with their headbanging, hard rock masterpiece Bitchin’.  Co-produced by Jay Ruston (The Polyphonic Spree, Meat Loaf), the album is due for release on 1st October 2007.

With all 14 fist-pumping, shout-out-loud tracks written by The Donnas,Bitchin’ allowed the ladies to develop their sound and write with a new passion, resulting in a fresh take on the signature Donnas sound that fans crave.  The album cranks out characteristic girl-power lyrics set to high-energy riffs and raw, punchy beats, launching listeners into non-stop party mode like only The Donnas can.

Formerly referred to as Donnas A, F, R and C respectively, Brett Anderson (lead vocals), Maya Ford (bass), Allison Robertson (guitar) and Torry Castellano (drums) have been performing together since junior high in 1993.  With 14 years of experience under their studded belts, The Donnas have come into their own at an early age.  “We know what we want, we know how to get it, and we are ready and willing to take it.  It’s almost like we have come full circle,” says Robertson.  “Maybe in some way we are still the same dorky pre-teens who started playing because we love rock n’ roll. The difference is that now we are completely comfortable and confident with who we are.

Known by most for their sassy, bad-girl reputation, album number seven represents a new level of maturity and independence for the ladies as they play double-duty as both hard-rock goddesses and savvy business women, taking their careers into their own hands with the launch of their own label, Purple Feather

Feelings range from boyfriend tension to girl fight anger to party-time enthusiasm on Bitchin’.  The track “What Do I Have to Do” takes a peek into the band’s more vulnerable side through lyrics that tell the tale of a relationship gone rotten.  « I’m being way too nice/and you’re as cold as ice,” is heard, as well as, “What do I have to do to make you want me?”  “Girl Talk” is reminiscent of earlier Donnas tracks with lyrics that bring to mind the image of a high school hallway cat fight with a heated Anderson shouting, “Up & down the halls/writing on the walls…  Stop talking about me…” and, “Think you’re jealous much/all up in my business/girl I’ve had enough/you better start running.”  Then there is“Don’t Wait Up for Me,” a Def Leppard-esque metal anthem that chants, « Loosen up/drain the cup, » and brings together clapping hands and stadium crowd cheering with pounding drums and a roaring guitar solo.