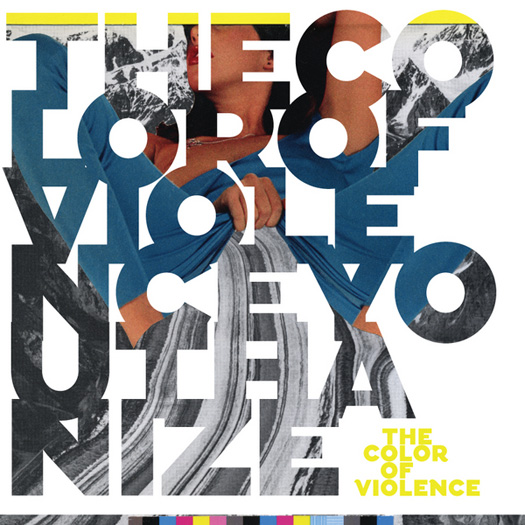 After dancing with the devil in the pale moonlight as one-half of the wildly popular screamo band From First to Last, Travis Richter (guitars/vocals) and Derek Bloom (drums) have purposefully set aside their knack for mainstream success with their new band the Color of Violence. Youthanize, as the title implies, is a grinding, surf-y testament to the wit, irony and artistry of two talented musicians working without restrictions or expectations. Taking their music back to the underground from whence they came, Richter and Bloom are here to provoke and inflame, yes, but mostly just to have some f’ing fun.

« The premise of the band was to be spontaneous and lighthearted while at the same time making intense music. » says Richter. “I feel like the whole mood of punk music has changed. Or maybe it hasn’t and I have just romanticized the hell out of the whole thing. Either way, I look at the early 80’s punk movement, even just on the west coast, there is so much diversity, from bands like the Weirdos to Black Flag to Bad Religion to X. Take it worldwide and you get bands like GISM, Siouxsie Sioux or the creatures, Nina Hagen, etc. I don’t see that anywhere now. That boldness, that excitement, that diversity. I’m not saying that we are on the level of any of those musicians, because we aren’t, all I mean is that this record isn’t a chugga-chugga blah-blah fuck me I’m angry kind of record. We tried to improv just about everything on the spot in the studio and tried to bring more to the table than the status quo for the genre. At its heart I feel like this is a punk record in that sense.”

Youthanize takes you back to an early era of grindcore/screamo and presents it with an almost indie sophistication. Tracks like « God Gave Me Deeze Nutz, » « Christina, Christina, » « Me and My Enormous Spirtitual Erection, » and the cover of the Pixies’ anthem « Rock Music » take unconventional guitar riffs, brutal production and unpredictable arrangements to create an unsettling and completely modern listen.

“It may not be groundbreaking, and it may not sell any copies, but we tried to be ourselves and experiment,” concludes Richter, “and were all really happy with the way it turned out, so fuck it.”