Please And Thank You 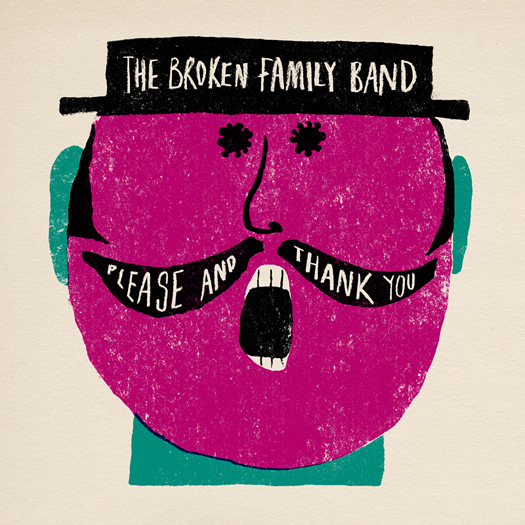 “I always thought it would be good to do a band for years and years and just keep getting better and better without falling out, or worrying too much if people are into it. And that’s what we’re in the middle of doing. Ha!”- Steven Adams, 2009

According to singer and lyricist Steven Adams, The Broken Family Band rose from the ashes of ‘several crap indie bands and a pretty good post rock band’ in post-millennial Cambridge (i.e. around 2001). Holidaying in Texas, he had enjoyed and been inspired by the state’s live music scene. “When I came back I started thinking ‘I want to make music like that, folk, country, rock, darker stuff all mixed up’. I didn’t think anyone else here was at that point,” he says. Eight years later, The Broken Family Band have gradually shed the accordionists, the cute girl singers, the banjo players and even the American drawl, and reduced themselves to the unchanged core of Adams, bassist Gavin Johnson, guitarist Jay Williams and drummer Micky Roman. And they’ve made their best album so far.

‘Please And Thank You’ is, according to Adams, an album loosely centred around the uncontroversial yet indeterminate idea of “being nice to people”. From its stomping opener ‘Please Yourself’, a sceptical look at hipsters (with ‘cocaine in your moustache’) offended by his cheap guitar (a £130 Danelectro) that nods, lyrically and musically to Elvis Costello’s classic masturbation anthem ‘Pump It Up’, to its conclusion, a subtle ode to burying the hatchet, country-tinged ‘Old Wounds’ (the only nod to their origins), it covers a lot of ground. The gentle ‘Mimi’ is about a beautiful girl who worked in an ‘adult’ shop, according to its writer. The drably titled ‘St Albans’, effectively a short story about a man who went to the wrong place to have sex with an Eastern European girl set to an ominous melody, started out as the more exotic ‘St Petersburg’, a title that was deemed to be ‘unrealistic’. ‘Borrowed Time’, with its anachronistic plea to ‘keep on choogling, even when we’re tired’, neatly captures the band’s split personality, while ‘Cinema Vs House’, a witty dissection of the eternal dating seesaw, has been spoiled forever for its writer. “My friend’s uncle has installed a home cinema in his living room, which makes a mockery of this song,” he grins.

Mixed by veteran producer George Shilling, ‘Please and Thank You’ is an affirmation of the classic bass-drums-two guitars line-up. Johnson’s deft bass playing is more prominent (‘Someone turned him up this time,” reveals Adams), as is Roman’s astounding drumming, while the lyrics capture a uniquely English diffidence (despite Adams having grown up in South Wales, he now considers himself a North Londoner).

“To us it sounds natural, but to anyone hearing this next to our first record it must sound like different bands,” says Adams. Even making it this far was inconceivable for a band that started out with no greater ambition than to make a record that would garner a decent review, somewhere.

“The first nice thing outside our own little world was getting a call from John Peel on a Sunday morning saying he liked our first record. It was like a pat on the back from your favourite uncle,” says Adams. Their first mini-album The King Will Build A Disco appeared in 2002, to general bemusement and delight that East Anglia had produced its own leftfield Americana act. The following year saw their first full-length album, the more folksy Cold Water Songs, closely followed by the inventive, adventurous Jesus Songs mini album. In 2005 they released the spiteful, dark Welcome Home Loser, clad in a particularly magnificent sleeve, and 2006’s cunningly titled Balls sealed their position as Britain’s most unlikely indie-country-rock outfit, as they turned up the fuzz and put down the acoustic guitars. By 2007 the distinctly British-sounding Hello Love was well received across the board, the swaggering single ‘Love Your Man, Love Your Woman’ becoming something of an anthem.

Yet somewhere along the way The Broken Family Band became quietly noted for having made seven albums of varying length while staying in full-time employment. Adams detests the tag. “It drives me up the wall. Nearly every band has jobs or they’re famous and they don’t need jobs.” They aren’t tied to their desks after all. “We take more time off than most people…” He admits though that the new song ‘Salivating’, apparently a timeless ‘on the road and missing my girl’ tune, was inspired more by messy weekends abroad with friends.

The Broken Family Band have played plenty of festivals and enjoyed many long weekends in Europe, especially the “big meals”. But no, they have never loaded up the tour bus and steamed down the highway for months on end. Their booking agent signed them after a sell-out show at London’s Scala on the grounds that their live shows feel more like friends showing off to friends than a band trying to prove themselves, exactly the same reason a rival gave for rejecting them a year earlier.

They even have lives beyond the Family. Adams holds the unique distinction of being the only person ever to have performed live on BBC Radios 1, 2, 3, 4 and 6Music, including two songs commissioned for the Today programme. Five Live, are you listening? He has written pieces for The Guardian and The Times and has recorded under his own Singing Adams moniker to much acclaim. Williams has recently established himself as a semi-professional photographer. Roman drives a stock car for relaxation. Johnson co-owns a roller disco and has a huge collection of seventies reggae music, which he claims influences his playing and hence the band’s sound. Half of the band claim to “have early American hardcore at the back of our minds” when playing. Adams’ favourite songwriters include Leonard Cohen, Syd Barrett and Bry Webb of underrated Canadians the Constantines. He and Williams prefer Deep Purple to Led Zeppelin and first bonded over Pavement, still one of Adams’ favourite bands.

Collectively the only band the BFB would like to meet is AC/DC. They know what they are and they know what they’re not and they are neither fashionable or even concerned. While most bands mellow with age, The Broken Family Band have become louder, more intense, and more focused.

« A reviewer once complained about how the production techniques we were using ‘didn’t seem to have changed since the 70s.’ Whereas we had thought ‘that one sounds nice and 70s’. Are we expected to worry about that sort of thing?” asks Adams. Well, are they?