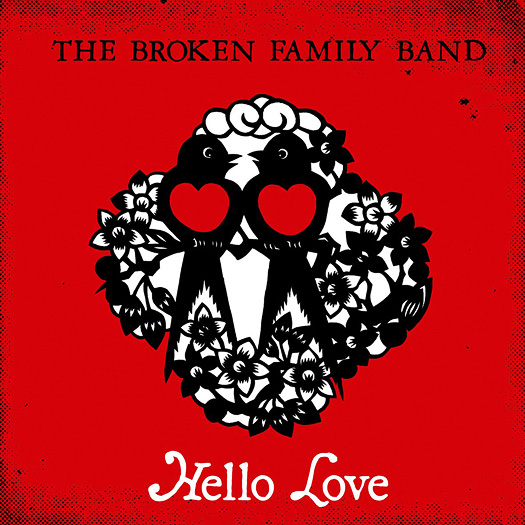 Hello Love is the fourth album from Cambridge’s The Broken Family Band, the follow-up to 2006’s critically acclaimed Balls. Recorded with Brian O’Shaughnessy (Primal Scream, My Bloody Valentine, Beth Orton) in just 12 days last winter, it’s the band’s strongest yet, a superlative, warm-hearted collection of twisted love songs. It’s also their heaviest, most diverse, and – dare we say it – least countrified album to date.
« We wanted to rock a bit harder, » says frontman Steve Adams. « It’s our trajectory – we like the fact that we’re getting heavier with each record and we all enjoy hitting our things hard. Ten years in, we’ll sound like Mastodon. »
The Broken Family Band’s sound has always belied the band’s English origins, and there’s plenty here that places them firmly in the mid-Atlantic – obvious reference points include The Shins, The Pixies, Violent Femmes and Pavement. And for the first time, Hello Love finds The Broken Family Band exploring a single unifying theme – one that has inspired songwriters throughout the ages.
« Our songs are normally full of spite, but we wanted to make an album about love, » says Steve. « People could argue that it’s a theme that’s been beaten to death, but what else is there? » These, then, are love songs filtered through the booze addled, world-weary viewpoint of The Broken Family Band.
The Broken Family Band emerged four years ago, and instantly marked themselves apart from their contemporaries by simply not giving a monkey’s. They play music for fun, not for stardom. « I think we’re outside of all that fame stuff, » says Steve. « Like, kids suddenly started buying our stuff the other day because of a track on ‘Skins’. Fat people follow us around venues asking for autographs, but people in our daily lives have heard enough of our pop chat. We will never feel like pop stars. »
Happily, their view of the rock ‘n’ roll lifestyle as an excuse to do drink and drugs rather than a need to pay the mortgage means The Broken Family Band continues to be an exciting prospect. And the songs just keep getting better. Slowly but surely, the Broken Family Band have built up a devoted cult following. Hello Love looks set to be the moment when the levee breaks..