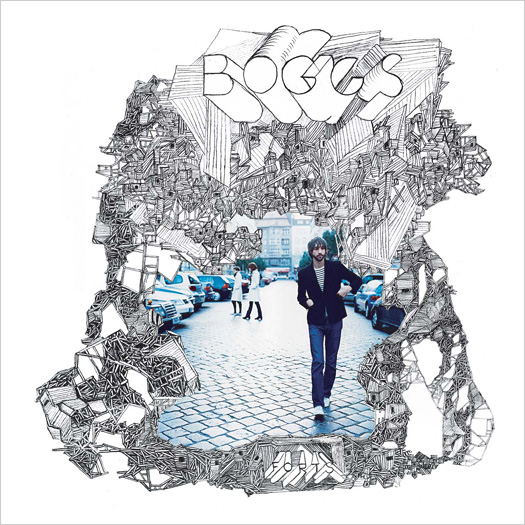 Flash forward. Flash back. Tune in New York, Germany, California, South Africa, the UK… Moving across genres and borders as easily as a dial moving up and down the AM band, The Boggs have spent the past six years defining, refining, building up, and breaking down their take on proto post folk garage punk folk punk blues and disco. Founded in 2001, principle member Jason Friedman has kept the band moving through a number of incarnations, with time off for the occasional side endeavour – a move to Berlin to focus on a series of large-scale drawings, for example, or directing a video for sometime tour-matesThe Rapture.

Over two years in the making, FORTS follows on the unhurried heels of 2002’sWe Are The Boggs We Are and 2003’s lost critics’ darling Stitches. FORTSstarted in 2004 on Friedman’s kitchen floor in Berlin where, using roughshod recording techniques, he laid down raw tracks. Working with drummer Christian Obermier over the next year and a half, Friedman added fresh layers to these tracks in a series of Berlin studios. The finishing touches to each song were added by calling on special guests who came in to perform specific duties. After finally mixing the stacks of tracks hauled back from Europe to New York’s Gigantic Studios, FORTS will be released in February 2008 on Tangled Up! Recordings.

As cartographers of the New Weird America before such a term came into marketing play, the Boggs have laid claim to territory well outside the usual indie imaginings and instead created a musical landscape that manages to be both achingly familiar and yet almost lunar in its strangeness–a field recording beamed in from a world in which boundaries and decades are irrelevant.

« Quite easily one of New York’s best rock exports at the moment. »  Dazed

« Nothing less than a sonic revelation. »  Magnet

CHRISTIAN OBERMIER: Percussion (except on So I So You)

1981: Emigrated to California following the family-business of surfing.  Drew more pictures of Superman and family dog.  Refused to surf.

1983: After turning the problems in a math quiz into a series of cartoons and deciding the sum of their parts by what best fit the comic, forced to repeat the third grade.  Tearfully.

1989: Heard Dinosaur Jr.’s ‘Freak Scene’ for the first time and jumped up on the bed shouting, “This! Is what I’ve been waiting for!”  Sold baseball cards, bought first guitar the following day and began to play and play and play.

1995: Switched to a double degree program attempting a B.F.A in fine art and a B.A. in philosophy.  Not the best idea.

1996: Started writing a novel suffering delusions of grandeur and believing it would be finished before turning 22. Another poor decision.  Finished, but never published (or read), six years later.

2000: Dropped out of the BA program. A good idea. Finished BFA.  Took a year off while thinking about grad school.

Winter: Wrote and recorded first batch of Boggs songs one stormy weekend using a shitty dual tape deck and headphones as a microphone. Inspired by the realisation that all folk music is punk or all punk music is folk or it’s all rock and roll, the 15-track ‘personal’ Anthology Of American Folk includes nearly half of the songs that would end up on the first record.

Summer: Began busking Boggs songs and met Ezekiel Healy in the subway. Started meeting up to play Boggs songs with Ezekiel every now and again.

2001: First show as The Boggs opening for Calla at the Cooler in New York.

July: Recorded and mixed first album in two days having written half the record the week before.  Ezekiel, Brad Conroy and Phil Roebuck, complete line-up at the sessions with Brad and Phil hearing most of the songs for the first time then.  Three tracks (‘Northwood ground’ ‘Emily, O, Emily’ and ‘Plant Me a Rose’) are versions taken directly from the original Boggs cassette recording.September:The Apocalypse.  City smells very bad.  Most people mope rather fearfully from place to place.

January 2002: Apartment blows up. Or rather, the basement blows up, the bodega below burns, and the firemen pull down the walls and ceiling in an attempt to stop the blaze. Forced to sift through the rubble in a frigid windowless wreck of an apartment and pack up what’s left.  Luckily, in love.

March: U.S. release of WE ARE THE BOGGS WE ARE.  It’s released on RYKO in the rest of the world in September. A great many people say a great many flattering things about it. Spent the year touring. Line-up then: David Lloyd (Cause For Applause), Zeke and Brad.

September: Getting very tired of explaining WHY The Boggs are NOT a bluegrass band.  Mumbled something about The Vaselines, Blonde on Blonde and Talking Heads before retreating to the green room to listen to EPMD on headphones.

November: Started recording second album, STITCHES, in New York.  Cursed from the beginning, the record is worked on-again off-again in six sessions spread out over the next six months.

Next six months: Have difficulty getting studio time.  Forced to steal time. When time is obtained, the studio breaks and a metal-body resonator guitar is smashed.  In the end, a record is made.

October: Following a U.K. pre-release tour, with The Rapture, STITCHES is released in the UK. The Guardian names it in their 20 best albums of 2003,The Creative Review selects the cover in its 10 best covers of that year, and the NME says “The Boggs do the nearly impossible and manage to find a new and brilliant take on folk and blues.”

November: Despite rave reviews for STITCHES, City Rockers is forced to cancel an upcoming December U.K. tour due to their own growing financial trouble.   Told not to panic.

November: Directed Rapture video for ‘Sister Saviour’ in an attempt to avoid panicking.

December: Recorded SO I SO YOU/IF WE WANT (WE CAN) 45 in New York in an attempt to avoid panicking. It’s later released on Rough Trade Shops’ For Us Label.

January 2004: A second U.K. tour is cancelled.  Beginning to panic.

February: Third U.K. tour cancelled, City Rockers finally folds having failed to release STITCHES outside the U.K. and the record is officially ‘lost’. Unluckily, due to a Valentine’s Day disaster, single as well.

March-April: Panicked. And panicked some more. And eventually…

May:  …decided to leave for Berlin to focus on drawing projects and to eventually begin work on a new record.

June: Arrived in Berlin knowing no one and never having been there before. A good decision.  Drew and drew and drew.

December: Recording continued with Christian Obermaier (Schneider TM/Mek Obaam) and Julian Gross (Liars) at Planet Roc in the absolutely insane factory complex that is the former GDR nerve center for Broadcast Recording on the outskirts of Berlin.

December: Started working as a Berlin walking tour guide leading English speakers on four-hour tours of the city concluding with a ‘Fall Of The Wall Story’ that makes them cry.

December: Played first New York Boggs show in over a year and a half. Line up at the show: Matt Schultz (Enon), Sam Jayne (Love As Laughter), David and Karen. Dizzy with excitement.

August 2007 – Recording complete, sign with with Tangled Up! Records in the UK and very happy with that decision!