FOUND IN THE FLOOD 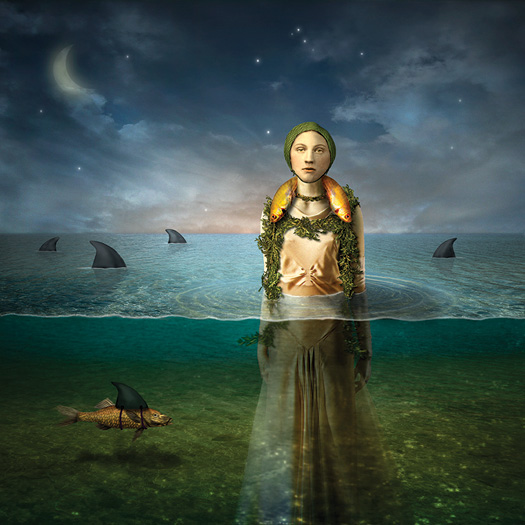 Bands usually seek to do one of two things: define their genre, or defy their genre. However, since bursting out of Tucson, AZ in 2001 with their unique mix of hardcore brutality and an eclectic musical palette, The Bled has done both. Taking cues from their peers in the burgeoning hardcore scene of the time—bands like The Refused and Dillinger Escape Plan—The Bled quickly became one of a handful of bands setting the standard for the genre. But with the release of the Found in the Flood— the band’s second full-length and first for Vagrant Records—The Bled have set themselves apart from the hordes of bands joining the hardcore fray, in the process forging their own place in the musical spectrum.

Cutting their teeth in the relatively remote Tucson scene, the members of the Bled— vocalist James Munoz, guitarists Jeremy Talley and Ross Ott, bassist Darren Simoes, and drummer Mike Pedicone—shared more than just a common background. They also shared the drive necessary to break out of their hometown. “We all pretty much grew up together in Tucson and we’d all played in different bands together throughout the years,” says Pedicone. According to Pedicone, it was obvious, even then, that the future members of The Bled were bound for more than just local scene notoriety. “It’s so rare for bands to get out of Tucson,” says Pedicone, “but it was apparent that we were the ones, in the bands we were in, who were going to keep playing forever. It was just a matter of time before we got together and got a serious band going.” Upon joining forces, the guys wasted little time making a name for themselves. “We were friends with the person who runs the main club in Tucson called Scrappy’s, so whenever we needed a show she would put one on. And it just seemed like more and more kids started coming out,” says Pedicone.

But The Bled was definitely not satisfied with being local hardcore heroes. “We had always wanted to tour, but we obviously didn’t have a booking agent, so we booked our own first tour. It was four shows, one that ended up being booked for a month later and another that was cancelled.” However, the band’s luck quickly changed. An EP and a string of fortuitous shows culminated with the band signing to Fiddler Records and releasing Pass the Flask, their first full-length and first time recording with vocalist James Munoz, who took the place of the band’s old vocalist before work on the album began. “The same night that the old singer quit, James was in the band,” remembers Pedicone. “Adam, the old singer actually recommended that we try out James, and there wasn’t even a question. The next day we practiced and it was a better fit than it had ever been before.” The Bled hit the road, touring relentlessly. Along the way, the band parted ways with its former record label and found themselves being courted by labels big and small. “We had always been fans of Vagrant, so after we were out of our contract, we started talking to them and it’s been amazing. We’re happier than we’ve ever been,” states Pedicone.

With their new deal inked, The Bled entered the studio, this time with legendary producer Mark Trombino (Jimmy Eat World, Blink 182). With Trombino at the helm and two years of touring under their belt, the band felt more comfortable exploring different directions with their music. “Vocally, I tried to challenge myself to be a better singer,” says vocalist James Munoz. “I tried to do different things. With the last record, I didn’t have much time to put my own spin on it; I just did what I could with the songs. On this record, the songs are just more dynamic. I got to work with a good producer, who was really responsive to new ideas. He became like a member of the band.” The resulting record, Found in the Flood, is a marked change from the band’s earlier efforts, documenting the band’s technical talent and brutal heaviness, while also showcasing their ability to weave disparate musical ideas into a cohesive whole. “Within the two years since the last record came out, I think we’ve all become better musicians, and we’re all interested in a lot of different things and trying to convey them through this music.” Pedicone offers similar sentiments regarding Found in The Flood. “The softer side of us got softer, and the harder side of us got heavier. James is really showing more of what he’s capable of. He did some vocal training and it’s really amazing how it came out.”

No song on Found in the Flood is more representative of this dynamic range than “My Assassin,” with Munoz showcasing his ability to hit falsetto high notes and demon screams with equal conviction. Likewise, the instrumentation vacillates between anthemic choruses and jarring moments of hardcore staccato. Elsewhere on Found in the Flood, the band moves from the chaotic (“Hotel Coral Essex,”) to the slow and brooding (“Daylight Bombings”), to an epic closing track (“I Don’t Keep With Liars Anymore”). The fact that such diversity makes it harder to place The Bled firmly into any one musical category is something the band is not necessarily too worried about. “We just kind of do what we do,” says Munoz about the band’s musical style. “Everyone always says that they don’t like to be classified, but then they put out an obvious metal record. We could get away with calling ourselves hardcore on the last record, but on this record, we have some rock songs, we have some slow jams; it’s heavy music, but we try to do it in different way. We don’t know what to call it.”

Regardless of what you want to label it, the music of The Bled has brought them from the deserts of Arizona to the fore of the contemporary hardcore scene. For The Bled, the sound documented of Found in the Flood is nothing more than the answer to their own musical equation, a combination of everything from jazz to Converge to Led Zeppelin. But if you must call it something, take the advice of Mike Pedicone. “I just tell people that we’re heavy.”