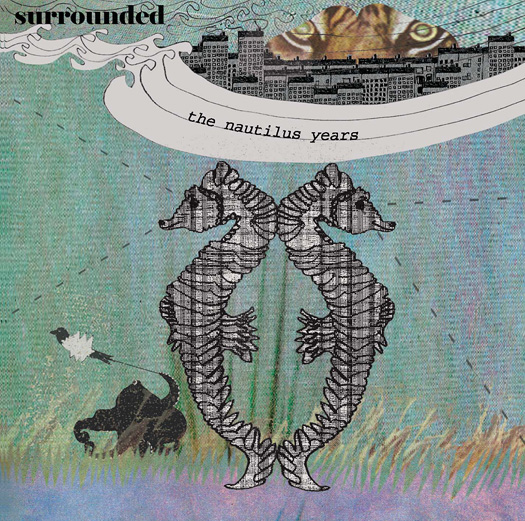 Born out of a yearlong recording session deep in Sweden’s forests eight years ago,Surrounded won glowing press for their debut album ‘Safety In Numbers’. Now signed to One Little Indian with their superb new album ‘The Nautilus Years’ set for release in March, they embark on a brief UK tour ahead of this in late February.

“Sweden’s answer to The Flaming Lips” – All Music Guide

The fuzzy euphoria of songs like ‘Safe Tomorrow Sun’ and ‘Paper Tangerine Crush’ recalls the sonic thrill of My Bloody Valentine or fellow Swedes The Radio Dept., while Rydell’s delivery on the more plaintive numbers (such as haunting ‘The Oceanographer’) evokes cult American singers Jeff Tweedy (Wilco) or Mark Linkous (Sparklehorse). ‘Easy Piranhas’ is discordant and bitter while ‘Swimming To Galapagos’ is a graceful, stately closer. Recorded and produced by the band themselves over a long, painstaking year, the craftsmanship and fervour at the heart of this album is evident for all to see. It is a rare, important and ambitious work: at once out of step with our modern world and exactly the tonic it needs.

Influenced as much by the forerunners of America’s alt-country scene as Sweden’s rich musical heritage, after years of poorly promoted tours and label frustrations the current line-up of Surrounded are a formidable unit: comprising Marten Rydell (vocals, guitar), Marcus Knutsson (guitar), Tom Malmros (bass), Johannes Linder (drums) and Erik Gustafsson (keys), the band are fiercely proud of ‘The Nautilus Years’ – “we wouldn’t change a thing,” says Rydell with admirable conviction.