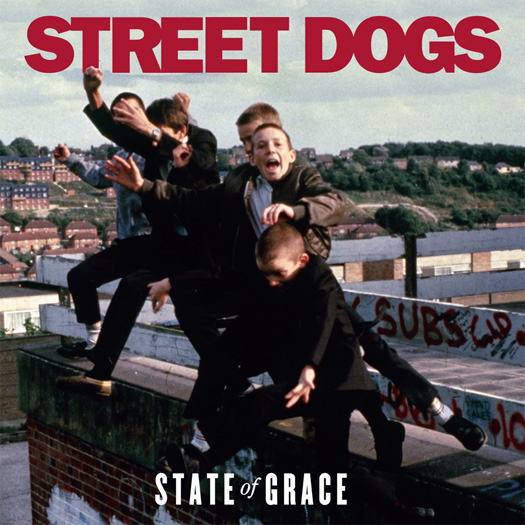 Tracing the Street Dogs’ story on the eve of the release of their new album, State of Grace, is no easy task. One thing that all parties can agree on is where it all started. At a time when the music scene teems with mediocrity and fashion-oriented bands that are simultaneously from nowhere and of everywhere, maintaining a sense of roots, politics, and place has become the band’s calling card, a way of demonstrating to the world that they most decidedly stand for something.

The Street Dogs, it is somewhat of an understatement to say, are from Boston. Mike McColgan’s name was already indelibly linked with the city, as he had already made his name as the frontman for the Dropkick Murphys, the standard-bearers of Boston punk during the late 1990s. Most musicians dream of achieving that kind of once in a lifetime success. But the Murphys’ rise to fame was something of an entr’acte for the duty-bound McColgan, who had already served in the military prior to forming the band, and who aspired to follow in the footsteps of his uncle and join the Boston Fire Department. So it was that McColgan left the stage for the firehouse in 1998, working over the following years as an EMT and a firefighter.

Now, the way these stories usually get told, the hero doesn’t fade out quietly into the night. Instead, he returns one last time before heading off into the sunset. And at first, when McColgan the firefighter continued to write during his downtime, and later began to moonlight with bassist Johnny Rioux in 2002, it almost seemed like that’s the way this story would end, too. They formed a new group along with members from each of their former bands (in Rioux’s case, he had formerly played for the Bruisers, another stalwart on the Boston’s 1990s punk scene). To hear Rioux tell it, the Street Dogs started as little more than a “poker night” for musicians, with piles of chips traded in for stacks of amps, instead. By the following year, the band recorded an album of new material,Savin Hill (named after the section of Boston from which McColgan hailed). They booked a date for a record release party at the Axis in Boston, and the scene was set for a triumphant return, one last time.

A funny thing happened on the way back to the firehouse, though. Boston’s a long way from Hollywood, and if the script called for the Street Dogs to hang it up after that comeback show, somebody forgot to tell them. “Savin Hill was going to be a one-off deal,” remembers McColgan now. However, upon arriving at a sold-out venue, with lines stretching around the corner, the band realized something was up. Both Rioux and McColgan remember this night vividly today. “Everybody was singing the songs,” Rioux recalls, while McColgan adds, “the feedback we got from the very first show was electrifying.” The album was released on Crosscheck Records, and the band began to do a series of regional dates touring alongside the likes of longtime Celtic punk stalwarts Flogging Molly.

It was in a conversation at a truck stop during one of these tours that McColgan and Rioux decided to make the band a full time endeavor and work on a follow up to Savin Hill. During this time, Marcus Hollar, a talented young guitarist from tiny Pilot Point, Texas, had become enamored of the first Street Dogs album and convinced himself that he needed to become part of the band. After months of emails and demo CDs, Rioux was sufficiently impressed to invite the young guitarist up to Boston for an audition with the band. He began playing with the Street Dogs shortly thereafter, so that in a matter of months Hollar went from never having been on tour to touring the world with his favorite band.

With McColgan on leave from the fire department and Hollar on board, the band was set to record the follow-up to Savin Hill, 2005’s Back to the World. The Street Dogs began to tour the US and abroad, playing dates on the Vans Warped Tour during the summer of 2005 and opening for the likes of the Pogues, Bad Religion, Social Distortion, The Bouncing Souls and Rancid. Critical recognition only increased with the release of the band’s third full-length in 2006, Fading American Dream, which like its predecessor was released on the band’s own imprint, Brass Tacks. Always fiercely political, the sound and fury reached fever pitch on the record, an insistent polemic against the excesses of the Bush administration and the redemptive power of the labor movement.

With the addition of a young, explosive rhythm guitarist, Tobe Bean III, and drummer Paul Rucker (replacing Joe Sirois, formerly of the Mighty Mighty Bosstones), the lineup was set for the Street Dogs’ coming out party. “We’ve always tried to earn our own stripes,” says Rioux, instead of trying to capitalize on McColgan’s legacy with the Dropkick Murphys. But there’s a sense now that the band has paid its dues, and is ready to graduate into the major leagues of headlining tours and high-profile records. The band signed with Hellcat Records and began a string of tours throughout the US and Europe, increasing the anticipation for the forthcoming album, State of Grace. Playing to crowds “from eight to eighty, blind, crippled or crazy,” as McColgan puts it, the band has seen its following grow, so that in some ways that night at the Axis in 2003 seems like a long time ago. But the band members are adamant that the only change over the last six years has been the number of people coming out to hear them play. With the kind of earnestness that carries even more weight coming from the mouth of a punk rock icon, McColgan reflects that “having stepped away [from the music scene] gives me a greater appreciation for the people who come out to our shows…our crowd ranges from young kids to older people, all of a positive, healthy frame of mind.”

Those crowds are sure to grow only larger with the July 7 release of State of Grace, a spot on the main stage of Warped Tour all summer, and a highly anticipated fall headlining tour. The new album, produced by Ted Hutt (Bouncing Souls, Flogging Molly), showcases the ever-confrontational lyrics of McColgan, but captures a broader range of songwriting than ever before. Fans of the band’s unreservedly political past work won’t be disappointed with “Rebel Song,” “San Patricios,” a call for Irish-Mexican solidarity, or the band’s reworking of the Skids’ “Into the Valley.” “The General’s Boombox,” a eulogy for Joe Strummer, underscores the tremendous influence that the Clash has had on the Street Dogs’ sound. The fierce Boston pride hasn’t disappeared, either; “Two Angry Kids” tells the story of a childhood spent in North Quincy, and the moving “Kevin J. O’Toole” is a dedication to McColgan’s departed uncle, like his nephew also a veteran and a Boston firefighter. It’s songs like “O’Toole,” as well as the record’s bookend tracks, “Mean Fist” and “Free,” that distinguish State of Grace as perhaps the most personal album the Street Dogs have written.

More than anything else, State of Grace paints the picture of a band that adamantly and unapologetically has things to say. Rather than serving as the closing orations for a punk rock band, the new album serves to put the world on notice that everything up until this point has been little but prologue, and that the story of the Street Dogs begins now.