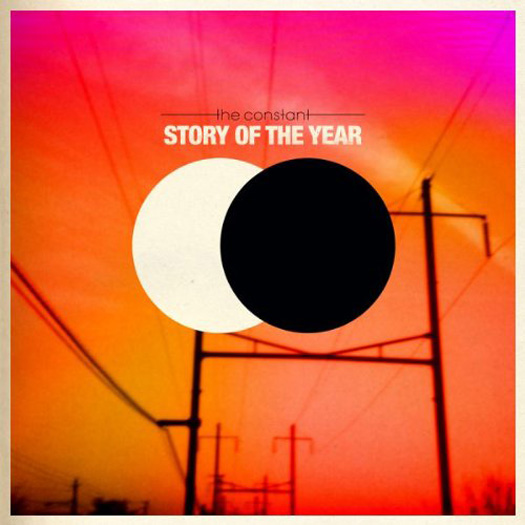 After a decade of world-wide touring, charting singles and three fan-cherished albums selling over a million copies to date, St. Louis’ hardest rocking band, Story of the Year have returned with an explosive new album, The Constant, which is set for release on February 16 via Epitaph Records.

Spending a better part of 2009 at home, Story of the Year focused on stripping the excesses, getting back to basics and re-energizing the music that initially brought them together, before hitting the studio with producer Elvis Baskette (Chevelle, Cold, Escape The Fate) for their fourth studio album and follow-up to 2008’s The Black Swan. Holed up in a secluded studio, the band proceeded to craft some of the best music of their career.

« This was the fastest recording and writing experience for us ever and it was cool because we didn’t overthink everything, » explains the band’s vocalist Dan Marsala-who alongside guitarists Ryan Phillips and Philip Sneed, bassist Adam « The Skull » Russell and drummer Josh Wills make up Story Of The Year. « Writing and recording The Black Swan was a long, grueling process and this time we wanted to do the opposite: just have fun, be spontaneous and make it exciting-and it worked out better, » he continues. « Everyone is so happy with the end product and it was a great time. »

Fans of Story of the Year’s beloved debut album Page Avenue as well as their most recent release The Black Swan will be pleased to know The Constant has something for everyone. The Constant’s anthemic rock tracks and emotional ballads will strike a familiar chord with long time fans while newer converts will embrace the band’s notorious raw energy and fresh songwriting. Showcasing their musicianship and songwriting skills with radio-ready tracks like the first single « I’m Alive, » the snarling metal of « To The Burial, » driving, post-hardcore masterpiece « The Dream Is Over, » the soon-to-be fan favorite sing along « The Ghost of You and I » and the heartfelt piano ballad « Holding On To You, » The Constant sees Story of the Year sonically stretching to create their most diverse and accomplished collection of songs yet.

The album’s title embodies the band’s work ethic and commitment to both themselves and their fans. « Music is the constant thing in life for us, » Marsala explains. « When I go to bed I think about music and when I wake up it’s the first thing on my mind, » he continues. « The Constant can mean anything; hopefully our band will go on forever and we want music to remain a constant thing in our lives no matter what. »