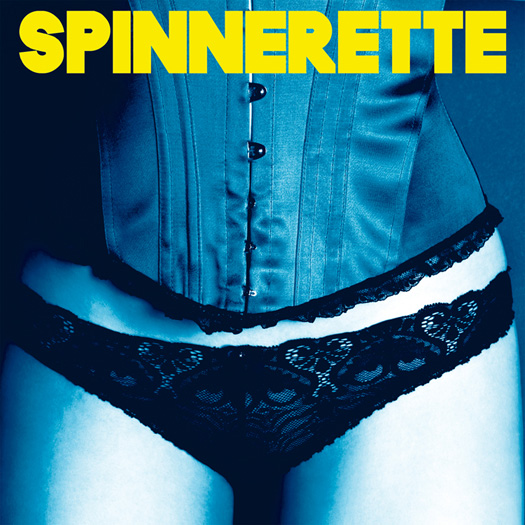 “A far poppier beast than her previous band…her return couldn’t have been timed better.” – NME

“..a more mature sound that is rife with killer hooks.” – KERRANG!

Brody Dalle unleashes her new band – and a new sound – on her debut album as Spinnerette released on June 15th on Anthem/Hassle Records.

Spinnerette is the sound of a black leather glove holding a lollipop stick and shoving it into crushed glass before offering you the first lick.  The 13 tracks featured on this eponymously titled record practically prowl out of your speakers.

Ghetto Love – the four track digital EP – released via Spinnerettemusic.com gave fans their first taste of the Spinnerette sound in December and Dalle showcased the album at two sold out UK shows in February.  A mix of ‘Sex Bomb’ by breakbeat DJ Adam Freeland topped NME’s Essential Tracks Of The Week, a further hint at Dalle’s new direction.  As guitarist Tony Bevilacqua put it, “these are rock songs you can dance to”.

Inspiration for the songs on the album comes from the twists and turns Dalle’s life has taken over the past three years. Having disbanded The Distillers in 2006, Dalle took time out to regroup and start a family with husband Joshua Homme. She began focusing on a new musical direction and the ways in which she could retain artistic control, whilst remaining firmly at the helm of her career. On her debut as Spinnerette, the joy of matrimony and motherhood contrasts sharply with illness striking those closest to her. As Dalle describes it, “Spinnerette is what happens when I let the tap flow”.

The Spinnerette album was recorded in Los Angeles at Pink Duck, the family studio of Joshua Homme & Brody Dalle, and at 11 AD the studio belonging to Spinnerette producer and band member Alain Johannes. In addition to Dalle and Johannes (Queens of the Stone Age, Eleven), the band line-up on the record includes Tony Bevilacqua (The Distillers), and Jack Irons (Pearl Jam, Red Hot Chili Peppers).

Biography
Spinnerette is the sound of a sweaty black leather glove holding a lollipop’s stick, shoving it into crushed glass before offering you the first lick. If that made any sense, it might be Spinnerette.There is sweetness and there is menace. You will have the desire in spite of the obvious danger. Have you been hurt before?
This is no awkward first fumble in the rumble seat: Spinnerette comes with experience. Brody Dalle has been places nice girls fear to tread without sacrificing virtue or integrity. Her last long-term relationship, The Distillers, ended messily, the way relationships tend to do. In the following months, there was a lot for one heart to bear: the pain of illness striking those near and dear contrasted with the joys of matrimony and motherhood. With such extremes of life pulling at her, it’s no great mystery that the resultant writing is possessed of equally dynamic range, with nothing left out. As Dalle describes it, “Spinnerette is what happens when I let the tap flow.”
Recording started with idealism and an urgent desire to finally lay down two years’ worth of ideas. The actual process had to triumph over adversity: there were the technical hurdles of a virgin studio, gut-wrenching personal tragedies, and meddling from outside interests. Perseverance and, more importantly, a positive outlook paid off. “We were like children, we had so much fun making this record,” gushes Dalle. Having assembled Alain Johannes (Eleven, QOTSA), Tony Bevilacqua (Distillers), and Jack Irons (Red Hot Chili Peppers, Eleven) to make the studio sweat, the creative process was imbued with an ‘anything goes’ spirit.
Recalls Bevilacqua, “The four of us got together in the live room on the first day of recording and started with ‘A Prescription for Mankind’. It was one of those momentsfor me: humbling to be playing in a room with that caliber of musician, feeling the long time connection between Al and Jack, also being so relieved that I was playing music with Brody again. Standing next to her while she was screaming the ending to ‘Prescription’ was amazing. Certain things move you in a band, whether it’s the energy of the people you’re playing with or the feel of the drummer… etc. For me it’s hearing that voice. It had been way too long…”
Over the course of a fevered fall, the record took shape. Dalle provided the lyrical thrusts and bed music, which she had written almost entirely on the unusual-first-choice-instrument of bass, before she and Johannes expanded the musical palette together. “’Ghetto Love’ is a great example of what happens when Al and Brody get in a room together,” says Bevilacqua. “It’s the attitude; something that sounds totally original. This is a rock song that can make you dance… you can’t quite put your finger on it. I’ve learned so much working with them. It’s very inspiring to be around.”
Songs continued to grow, some from the unlikeliest sources. The melody of “Geeking” came from a lullaby Dalle had been humming to her daughter. “Impaler” was enhanced by a wine bottle with just the right amount remaining to be blown in key. Explains Dalle, “That moment was such a testament to what a musical genius Al is. It’s not all about notes or arrangements, it’s about creating a mood. Watching him work is a sight to see; there is so much going through his head musically that he almost couldn’t move fast enough to get it out.”
The resulting songs will practically prowl out of your speakers. There is no factory sterilized and sealed, faux ferocity to be found on this disc. One can practically hear the dirt underneath Dalle’s fingernails as she uncovers a golden era turned brass. Blue sky idealists best stay indoors, as this album rages outside the cages of conformist society.
With the recording work done, one more relationship came to its final kiss. Walking away from the record company with her precious master tucked under her tattooed arm, Dalle felt rightly fortunate and raring to find new dance partners but also daunted by the need to find a team that would share her vision. To assemble a team of people you can trust, can enjoy working with, and won’t mess up your hair is a difficult thing. Dalle made new connections and reestablished important existing ones: with her fans.
Of critical importance was knowing if the new songs knew how to screw; putting Spinnerette’s back against the mattress by getting back on stage. Having released “Valium Knights” electronically in advance, the band –“roving gypsies on the run,” as Dalle describes them– took to the stage and the fans and the music press took notice, collectively sighing in post-coital joy that Dalle was returned and in form.
With the foreplay well behind, it’s now time to issue forth. “This has been the longest, most painful but rewarding process of making a record I’ve ever been through,” admits Dalle. With many tracks left off the record and others still percolating, Spinnerette has all the hallmarks of a continued blossoming. “I want to do more. I want the kind of longevity Dolly Parton has had. I want to be a prodigious writer and artist. I can’t stop it coming out of me; it’s the only consistent thing I’ve ever done in my life.”
The proof is on the platter and Spinnerette both coos and bares teeth coming out your speakers. You’ll think you’re being caressed but Dalle isn’t offering a cuddle. One listen and you will be making Spinnerette promises you hope she’ll make you keep. Oh babe, I will never stray.
www.spinnerettemusic.com
Share on Facebook Tweet This Share on Google Plus Pin This Email This