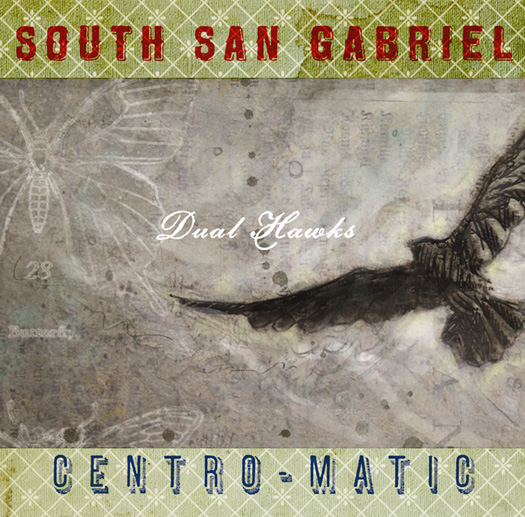 Keeping track of the distinctions between Centro-matic and South San Gabriel could be a full-time effort, if one were so inclined. Based in Denton, Texas, Centro-matic once titled an album South San Gabriel, only to give a splinter faction of the participating musicians – meaning Centro-matic and more friend – the same name. South San Gabriel includes the four core members of Centro-matic, plus additional members, but we’ll get to that shortly. You might be inclined to say that Centro-matic material tends to be more rockin’, with SSG its mellow, literary counterpart, and Will Johnson’s solo material as … well … usually (how shall I put this?) skinny-dipping in the abyss – but it would be a gross oversimplification. Each of these projects shares all of the aforementioned respective qualities and more. What is distinctive about the release of Dual Hawks is that we get the chance to hear side-by-side the various ways in which Centro-matic and South San Gabriel complement and play off of each other – sort of the full-length equivalent of a split single.

Named for a model of an Italian accordion, Centro-matic began as little more than a home-recording outlet for Will Johnson’s unstoppable muse. Redo the Stacks (1997) was primarily the work of Johnson, with soon-to-be Centro-matic members Scott Danbom on violin and Matt Pence in the recording engineer’s seat. The band soon grew to become a more collaborative effort, with Danbom on keyboards, bass, and vocals, as well as the occasional violin, Pence on drums and production/engineering duties, and Mark Hedman on bass and guitar.

The head wound may have been a setback (as the name of Johnson’s music- publishing company implies), but it was by no means the expiration of Will Johnson’s songwriting prowess. Far from it. Over the past decade, we have been treated to nine Centro-matic albums, four EPs, five singles, two South San Gabriel albums, two Johnson solo efforts (as well as a tour-only release) – every one a Maserati. Some bands focus on quality; others on quantity. With Dual Hawks, the respective bands prove once again that they are one of the rare breeds who can do both. Catchy hooks, wiry guitars, harmonies and handclaps, splendid string and horn arrangements, and songs so well written and produced they will make indie-rockers of lesser mettle go home and cry.

I had the good fortune of spending some time on the road with these folks a few years back, and let me tell ya, in this business we call “show,” you meet some characters (not all of whom you’d feel comfortable having over for a barbecue). What struck me about Centro-matic and Co. was not simply that they are extremely talented musicians, producers, and arrangers, or that they are road-seasoned to the point of seeming incapable of performing a stale, by-the-numbers show, or that they consistently put out stunning and at times breathtaking recordings, or that they are among the finest people I’ve been given the opportunity to know – but that they are all of these things and more. Every day. Centro-matic and South San Gabriel are, in a word, exceptional (in all senses of the term). I would tell you more, but I don’t want to ruin the thrill you will get when you put Dual Hawks on for the first time. And I can guarantee you, it won’t be the last.

/cont’ d…
P.S. I spoke with Will recently, and I considered peppering my yarn with some of his quotes about the Dual Hawks project. Trouble is, the only thing I enjoy more than the sound of my own words is the sound of Will’s. So I thought it only fair to let him do some talking.

EB: Nuts and bolts, where and when was the album recorded, and by whom?
WJ: We did the bulk of the Centro-matic side over the course of a week back in July 2006, most of which was written right there on the spot. We came back for some overdubs and such a few months later. The South San Gabriel side was recorded during February of 2007. All of the recordings were done at The Echo Lab in Argyle, Texas, by Matt Pence.

Any guests on the project that I should note?
All of ’em, homeslice!

Was Dual Hawks always conceived as a double album? Was it an excuse to get more songs out at once?
Originally, our last record (Fort Recovery) was supposed to be a double album. In the end, we decided not to do it that way, but I think there was still a carried-over attraction to eventually doing one. As time went with all these recordings, I think we all came to agree that it was a very solid look at what each of our musical entities do. They sit pretty well together. I think it was originally Mark’s suggestion to do the split double album, and we all agreed it was time to shake things up a bit, put out a bold release and take a chance. Something real fan-friendly, and at the same time against the grain.

Where do the songs come from? Do they have a unifying thread?
The approaches to each side were pretty different. I worked on the South San Gabriel songs for a number of months before we all got together, constantly picking at them, changing things. It’s far more preconceived, carefully orchestrated and labored over. The Centro- matic session was more about writing and recording right there in the moment. More than half of the Centro-matic side was written in the
studio, and those songs were recorded within hours of being written.
Lots of spontaneity, rawness, and fun in that approach.

Did you have “indie-rock ELO” on the brain at any point in the process?
Yeah, more so I think during the South San Gabriel recordings.

Other thoughts about the project worth noting?
We kept a loaded BB gun on the back porch at all times during the South San Gabriel sessions. We hung targets in the form of cans and photos of politicians, sports stars, and general turds and/or douchebags that we just don’t dig hanging from a tree in the distance. Anytime anyone needed to blow off some steam, they’d just pick up the BB gun and start shooting at stuff. Poor man’s therapy session, I guess.