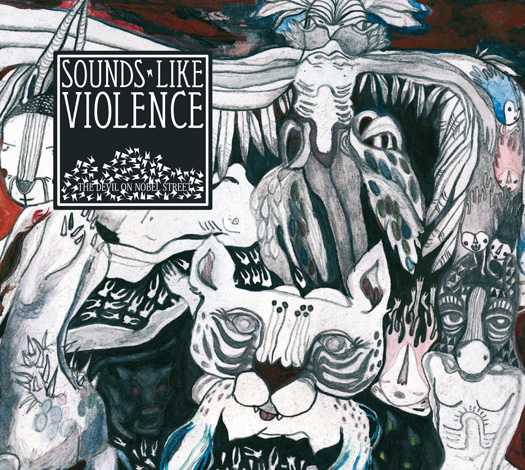 Sweden’s Sounds Like Violence will release their full length album The Devil On Nobel Street on May 25th via Burning Heart Records. Having spent 2008’s winter in the studio working closely with Ryan Hewitt (Alkaline Trio, We Are Scientists, Red Hot Chili Peppers, Blink182), this Spring will see their sophomore release follow up 2007’s debut album “With Blood On My Hands” (Kerrang! KKKK – Soul-crushingly magnificent. Sounds Like Violence, in actual fact, sound like pain. Searing pain)

The demons of black love that haunted vocalist and lyricist Andreas Söderlund while writing “With Blood On My Hands” have been overcome. “Fuck love, I don’t need love anymore”, says Söderlund, a hint of irony twinkling in his eyes. To continue with a smile, “Writing lyrics having to do nothing with love was such a relief”.
The Devil On Nobel Street is filled with melodic, genuine rock of the compelling, intense repute that earned Sounds Like Violence critical acclaim for their debut effort.
Foreswearing love or no, there are demons aplenty haunting the singer still. Detailing days in the life of Söderlund with poetic gloom, “The Devil on Nobel Street” is a song about the roughness of his hometown Malmö and the street he once lived on. “I had bums sleeping in the flat above, the police constantly chasing someone outside my window, drug dealing etc… One of my neighbors was this kid I always felt so sorry for. No friends, probably bullied in school and every time I saw him he was acting out like a little devil, as if he was taking revenge for everything that had hurt him in life…”
While “Reeperbahn” speaks of Söderlund’s personal relationship with God, “sometimes He bugs me, we don’t always get along …” , “Darkness over Eslöv Street” is the story about moving from Nobel Street to Eslöv Street, “a move of 200 meters. Not a big step for mankind, but for me, after ending a relationship, a big step instilling the fear of being alone”.
Describing his burn out with “Beast”, the departure from the bands former label in “$5900”, and the loss of a band member through “1993”, the record is an intimate glimpse in Sounds Like Violence’s here and now.
Where “With Blood On My Hands” went for the jugular, The Devil On Nobel Street will pierce your heart.
Having previously shared stages with the likes of The Wombats, Fightstar and AFI, Sounds Like Violence will be touring in support of The Devil On Nobel Street.