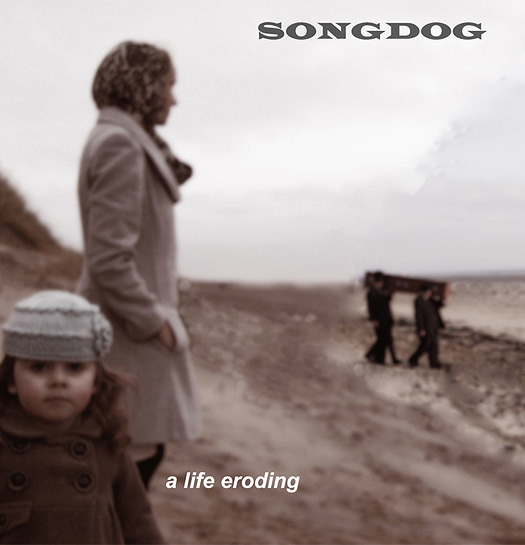 “But when you wake up from a dream there’s no getting back there” — the poignancy of passing time, the magic dissolving, is the recurring theme of this latest album from Welsh folk noiristes SONGDOG.  Lives fade away like a half-heard murmur behind the curtain in the cinema on a Saturday afternoon, love disappears in a taxi on a rainy night, they’re “growing old in a snakepit”, yet the old punk spirit, realigned for modern times, remains intact in the uncompromising, explicit lyricism of ‘A Life Eroding’.

Fans include Bruce Springsteen, who used their track ‘Days of Armageddon’ for « walk in music » on his last European tour and personally requested a copy of ‘A Wretched Sinner’s Song’.  Recent dates included the Roundhouse Studio, Bush Hall, Union Chapel, ICA and Spitz, supports for Joan As Police Woman and Duke Special, and The Go-Betweens on their last UK tour. They have also appeared at international festivals in Ireland, Canada, Spain, Sweden, Holland and Russia.

Lyndon’s non-musical writing includes ‘Water Music’ (for which he won the Verity Bargate Award for Best New Play), ‘Jitterbugger: a cartoon for the stage’, a French monologue, ‘Conte de Fées’ and a screenplay ‘Crazy House’.  He was recently invited to submit a piece on Samuel Beckett for a forthcoming book about musicians and their literary heroes, ‘Filthy Lyre’.

“Their music is dark and sinister and beautiful and Lyndon’s songs are by turns sexy, scary, funny, creepy, heartbreaking and usually always brilliant.” Allan Jones, Uncut

“Like Nick Cave, he sings as if the world’s end is nigh, and does so convincingly”Q