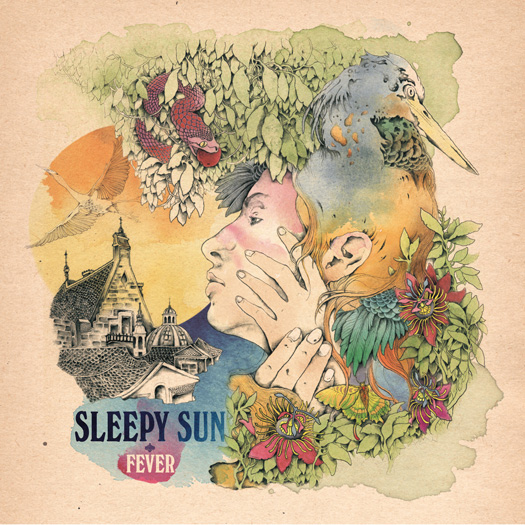 Sleepy Sun is a California band from many Californias. They hail from the rolling oak and sage hills of Sierra Gold Country, The San Francisco Peninsula, where Kesey raged and the Dead were once Warlocks, and the forever-sunshine climes of the Southland. They came together—young and garage strutting in the coastal Northern California crucible of Santa Cruz. And there they birthed the Sleepy sound—dead blues shaken alive, razor sharp and ramblin’, soul, sonic science and dead-on pop surgery. Wooden, earthy, stratospheric, and swinging…California music of beautiful contrasts for conflicted times.

Now, two records into a frighteningly fast-blossoming evolution, Sleepy Sun are a living machine of fire and focus. Their first release on ATP records Embrace illuminated the golden path to Sleepy land—hard-riffing, delicate, dreamy and cultivated. The latest ATP release, Fever, is arrival at the palace the path promised.

Fever is the honey harmonies and danger wailing of Bret Constantino and Rachel Williams pulled from a tender tangle into steel-strong braid; the wing-on-wing guitars of Matt Holliman and Even Reiss in screaming dives and sweet ascending circles; the lowdown served up tough and thundering from drum and bass authorities Brian Tice and Jack Allen.

Fever is a band working, like the heroic combos of old—real, made by hand, eyes ahead on an unbridled future and giving two shits for the sideways glance of the lurking trend spotter.

A band working, and a working band—Sleepy Sun’s soaring and soul-stirring live shows are already mowing down audiences on both sides of the Atlantic. They’ve opened for Autolux and Mudhoney, rocked Primavera and Treasure Island, and relentlessly toured the capitals and humble hamlets of North America and Europe. And in their path, the converts are fast becoming legion.

They are a band of musical adventure too—tackling Graham Nash’s ‘Chicago’ for a forthcoming compilation celebrating the Hollie/CSNY legend’s work. English electronic collective U.N.K.L.E. have taken note of Sleepy Sun’s eclectic energies as well, working collaboratively on a track with the band for an upcoming single and LP.

Sleepy Sun won’t relent in 2010. Fever in May, SXSW and the Arctic Monkeys in spring. And as always, a hundred twists yet untold in a message—sent with burning love and rock-solid soul—from California to the whole damn beyond….