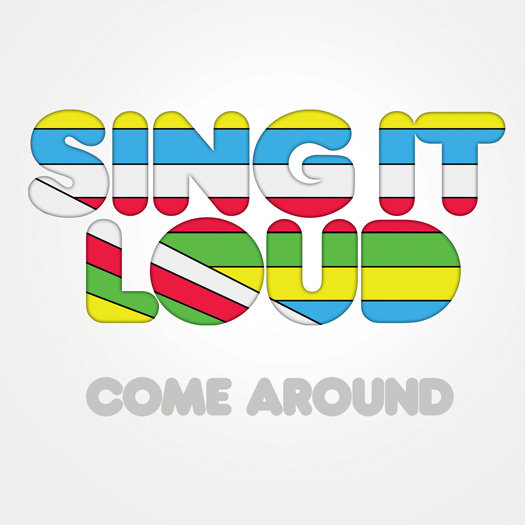 Sing It Loud is a proud pop band with an arena-rock musical background and a punk-rock pedigree. “So many pop bands are on ‘pop’ record labels, but we’re a pop band on the most badass, punk-rock label ever,” explains vocalist/guitarist Pat Brown. “It lets us keep a more individual and original vibe because we’re not associated with a bunch of bands on the same label that sound exactly like us.”

On the flipside, the members of Sing It Loud are prepared for punk purists to call foul, but they aren’t fazed. “Many old-school, Epitaph punk kids hate our band, but I don’t care,” admits guitarist/vocalist Kieren Smith. “Honestly, people will love and hate what you do. I’m doing this band for me and my boys. People change, music changes, labels change.”

That said, Sing It Loud is happy to usher in change when Epitaph Records releases their debut Come Around on September 23rd. Produced by Motion City Soundtrack guitarist Josh Cain and engineered by Mark Trombino (Blink-182, Jimmy Eat World), Come Around is a collection of songs with fist-pumping melodies (like “I’ve Got A Feeling” and “Marionettes”) and head-bopping choruses (like “Best Beating Heart” and “No One Can Touch Us (featuring Alex Gaskarth from All Time Low)”), which are sure to give fans a full-body workout. It’s no wonder that audiences are advised to hydrate before seeing the band live, which is something that longtime listeners have known since seeing the band play their first shows.

Although those first shows were admittedly terrible (“I honestly don’t know why [Epitaph label head] Brett [Gurewtiz] signed us; we were so bad,” insists Smith.), Sing It Loud showed the kind of promise that couldn’t be denied—despite only playing seven shows before they got signed. It all started in April 2007 when frenemies Brown and Smith were in two rival local bands in Minneapolis (Semester and Jamestown Story, respectively) but soon realized they had an unexpected connection: Smith’s step-aunt was dating Brown’s dad, unbeknownst to the two teens. It was then that they decided to join forces, form Sing It Loud and meld together Brown’s love of pop punk with Smith’s affinity for arena rock.

“I was always captivated by bands that could own their crowd and whose fans stood by them through thick and thin,” remembers Smith, who counts Kiss and Def Leppard as among is early influences. “They became more than a band; they were a lifestyle.”

Sure, that lifestyle had a lot to do with big hair and spandex pants, but it also included longevity—something that the members of Sing It Loud hope to achieve with the release of the album’s first single “Come Around.” One listen to this infectious, pop-tastic love letter and you won’t be able to get it out of your head no matter how hard you try—that is until you listen to “Don’t Save Me.” Sometimes relationships just aren’t meant to be and the song is an ode to making a clean break from the one you worked so hard to woo. Come Around has something for everyone—big riffs, bigger choruses and enough catchy melodies to fill a PODS storage unit.

“We don’t want to be a band that lasts for only one or two albums and then drops off the face of the Earth,” says Brown. “We want to be able to play shows and support ourselves by doing this for the next 10 to 20 years, hopefully. We love doing this and there’s nothing else we want to do.”