WE HAVE EVERYTHING WE NEED 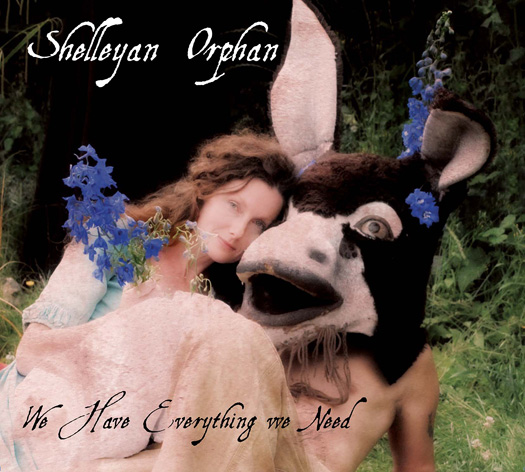 So begins the story of Shelleyan Orphan. Their name, taken in homage to the poet

Percy Bysshe Shelley is what brought Caroline Crawley and Jem Tayle together at first, forming the band in 1983 in Bournemouth, eventually signing to Rough Trade records in 1985.

Combining their love of all musical genres the duo created an unusual blend of pop on their debut Helleborine, utilising a full range of classical instruments, including some obscure ones, like the Strumento da Porca and tamboura. Their influences were diverse as well, as anything from Joy Division to Sparks, Barry White and Delius ebbed and flowed through their ethereal and pulsating sound.  Yet above all, Shellyan Orphan is a vocal band.  This was illuminated with their next album, 1989s brilliant and critically acclaimed Century Flower, produced by Dave Allen (The Cure, Human League).  Following the release, the band toured supporting The Cure throughout Europe and America gaining a wider fan base.

The third album, 1992’s Humroot once again found the duo implementing their love of musical combinations.  It found its way to their fanbase and enabled them to continue playing for a few years.  After that, Caroline and Jem took a long break from the music industry, coming together occasionally but not as Shelleyan Orphan, until now.

So here is their first new recordings in seventeen years, a collection entitled We Have Everything We Need.   They recorded the album at Riverside Studios in Bath with Steve Evans (Siouxsie, Robert Plant and the Proclaimers), while the strings and woodwinds were recorded in Budapest with the Hungarian National Radio Orchestra.  The album blends a unique use of strings, woodwind and the unusual (a Hurdy Gurdy and Celeste, for example) with the rhythms of Boris Williams (The Cure) and Charlie Jones (Goldfrapp, Robert Plant).

Moreover, with We Have Everything We Need, Caroline and Jem’s voices come together beautifully once more, but the sound is more calculated, mature and patient. Space is left for the singers to explore, reinvigorate and revisit past melodies, harmonies and fantasies.  It’s a jubilant listen, timeless as always, and fitting with the rest of Shelleyan Orphan’s canon.  In addition, a 4CD/DVD box set is due out in the winter featuring all four albums, a bonus disc of unreleased music and a DVD.  Fall tour dates are also TBC.

Caroline Crawley and Jem Tayle formed the band in 1983 in Bournemouth.  After a Radio 1 Session and on the strength of a demo, they signed to Rough Trade in 1985, releasing two singles before their debut LP.

They developed a strong cult following through three full-length albums between and a series of side-projects.

Now based in Bath, this is the first time in sixteen years Crawley and Tayle have come together as Shelleyan Orphan, minus one track for a Tim Buckley tribute in 2000.

During the time-off, Tayle formed Elephantine while Crawley formed Babacar.

The same personnel that worked with the duo in the early 90s is present on We Have Everything We Need.

WE HAVE EVERYTHING WE NEED  BIOGRAPHY

Recorded at Riverside Studios in Bath in early 2008.

Produced by Steve Evans and featuring Boris Williams on drums and Charlie Jones on bass.

The strings were arranged, produced and recorded in Budapest by the Hungarian National Radio Orchestra.

Engineered by Evans, Tayle and Crawley.

Mixed by Steve Evans and mastered by Kevin Metcalfe at Soundmasters Studio.