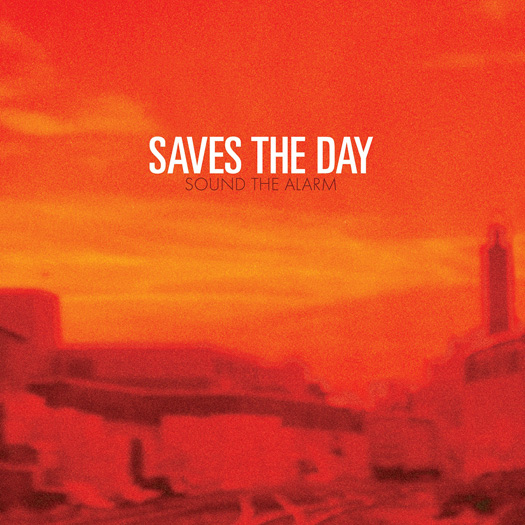 “We are currently working on new songs. They are short and fast and angry and will make you want to tear your ears off your head.”

That Saves the Day’s new album, SOUND THE ALARM (due April 11, 2006, Vagrant Records) is the tightest, fiercest, and most explosive album of their career is indeed

worth tearing your ears over. But more miraculous is that they created such a phenomenal album at all amidst what could only be described as a shit-storm of the highest

“There were some scary times when I wasn’t sure we’d be able to pull this album off,” says Saves the Day guitarist David Soloway. “We battled some pretty serious demons getting these songs together.” Adds STD’s mercurial singer-songwriter Chris Conley: “We spent last year without a label while dealing with personnel changes, building a studio, and trying to write and record an entire album — I was filled with frustration and anger.” And given his band’s circumstances, who can blame him? Flashback, two-and-a-half years ago, when Saves The Day were on the brink of owning the world: They had sold over half a million albums, were signed to a major label, had toured with Green Day, Weezer, Dashboard Confessional, and Blink-182, and were about to release both “In Reverie,” their most musically sophisticated album to date and the aptly-titled compilation album, “Ups & Downs.” “Pride always comes before the fall,” Chris humbly explains. Exactly one month later their major label went bellyup and the band was stuck in major label purgatory hell — i.e. their contract was gobbled up by an even larger music conglomerate. But Saves the Day aren’t some new-jacks on the block who crumble before adversity. Chris and David have been playing together since they were 13-years old and living in the backwoods of New Jersey. They played too many basement hardcore shows and released their debut album “Can’t Slow Down” before they had even graduated high school. By twenty, they were seasoned road warriors with obsessive fans and signed to Vagrant. They even survived a near-fatal tour van crash (ask David about his

teeth and nose). Chris has supreme confidence in the band, their music and their fans.

Saves the Day spent the balance of 2004 touring before rabidly loyal fans who could care less what label they are on. Witness the over 300,000 views on their My Space pages and the nearly 150,000 albums “In Reverie” sold with no label support. At the start of 2005 Saves the Day began building their own studio in a one-car garage complete with a mobile Pro-Tools sound rig. “We had two welcome mats outside the studio which we found ladybugs on,” Chris recalls. “Pete came up with the name Electric Ladybug,” (an homage to Jimi Hendrix).

“The sound there is huge, for such a small space it has perfect acoustics.” The band brought in former producer Steve Evetts (Dillinger Escape Plan and Lifetime) who had helmed their first two albums, “Can’t Slow Down” and “Through Being Cool.” Before recording the band had to find a replacement for bassist Eben D’Amico who after six years in the band parted ways. Through Steve Evetts, the band tried out Manny Carrero from Glassjaw who STD knew from touring. “Within two seconds of hearing him,” Chris says, “I knew he was the right person. He’s just incredible. For the first time in a long while we felt like a band.”

With Electric Ladybug the band was able to record for the first time in their nine-year career without time or money pressures. At the time, Chris says he was listening to a ton of Bad Brains and the Pixies. “I just couldn’t get enough of them, plus I was also listening to the Stooges and the Damned.” Which, along with their recent travails, helps explain the detonated neutron bomb that is SOUND THE ALARM. “I had a lot of anger,” Chris says, “and a lot of great source material.” From the flex-your-head raw power of their first single “The End” to the graphic lyrics (“I carve out my lungs…”) of the hugely hooky “Eulogy” to the unrelenting rhythm of “Delusional,” Saves the Day sound more visceral, raw, and dangerous than ever before. After a successful tour through the fall with Senses Fail and Emanuel, in which Chris says the band never sounded better or had more fun, the band found themselves in an enviable position few bands ever find themselves: They had a record, which they owned outright, free from label or business constraints, they had a large and a supportive fan-base, they had a proven sales record. The band was back in the driver’s seat. “I knew we didn’t want to go back to a major label,” an industry-wizened Conley says. “We didn’t want or need the big machine, we just wanted to be somewhere we felt comfortable and Vagrant felt like home to us. We never had a single problem with them. We’re proud of this new album and we wanted it to be somewhere good and fortunately for us everyone at Vagrant was happy to have us back.” So what’s next? Saves the Day will be touring through the spring with Circa Survive and Moneen. They’ll be selling their ‘Bug Session’ EPs, featuring old songs they reinterpreted at Electric Ladybug, which will only be available to fans at their concerts. Most ironically, Saves the Day were saved by the music industries’ rampant confusion and consolidation. Now, with their own studio, a supportive record label, devoted fans, an active web site, and a national tour, they are once again in control of their destiny.