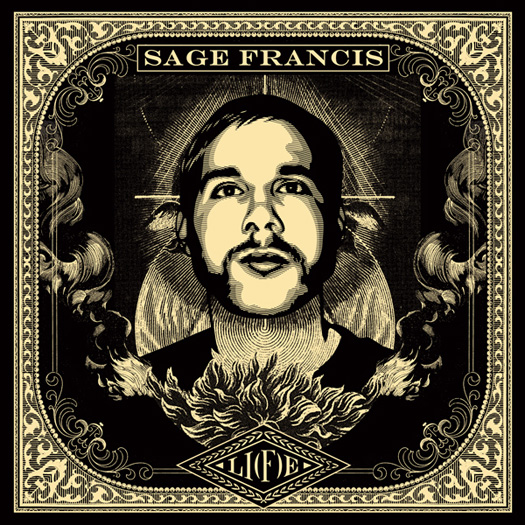 “All great truths begin as blasphemies,” proclaimed the fiery playwright George Bernard Shaw. It’s a sentiment that can be applied exponentially to the works of rapper Sage Francis and his exhilarating new album Li(f)e. Francis has never been afraid to provoke. As a result he is a sometimes polarizing and increasingly important figure in modern music. Adored by many, reviled by a few but never ignored and always essential, Sage Francis has emerged as the reigning agent provocateur of hip hop.

Inspired at a young age by the revolutionary sounds of Public Enemy, Rhode Island native Francis first caused a stir in 1996 with a self circulated tape entitled “Homegrown Demo.” He was soon fronting a band, helming his own radio show and had released a 12” single on a friend’s independent record label. Then came monumental wins by Francis at both the 1999 Super Bowl MC Battle in Boston and the 2000 Scribble Jam freestyle in Cincinnati which served to solidify his position as the country’s leading freestyle rapper. With a dedicated fan base garnered from his exhilarating live shows and a mounting internet buzz, Francis was able to support himself through bootlegging his own songs and relentless touring.

When Francis’ eventually released his debut album Personal Journals the record was heralded as both an artistic masterpiece and a genre game changer. Instead of the stereotypical hip hop braggadocio, the self christened “self-referentialist” utilized his extraordinary rhyming skills to deliver a startlingly self-revelatory album exploring such unconventional topics as sexual identity, death, mental illness, and a sister’s self mutilation, simultaneously heralding his arrival as a vital new artist while redefining the parameters of the art form.

But it was a song entitled Makeshift Patriot that changed the perception of Francis from merely a supremely talented and unique MC to that of an uncompromising artist completely unafraid to speak his mind. The song was released just a month after the 9/11 attacks and offered a ferocious critique of the American media’s lack of questioning and unabashedly biased coverage of the events. It proved to be one of the few voices of skepticism amidst a musical landscape of near deafening silence.

The 2005 album A Healthy Distrust further bolstered Francis’ role as fearless social critic with its riveting denunciation of corporate greed, warmongering and America’s collective complacency. It is a power of observation and outspokenness that continues to fuel his music today, and never more artfully than on his startling new album Li(f)e with its unflinching critique of religion. “My career kicked off when I was in this very disgruntled heartbroken state,” Francis explains. “On my early records I delved into my art just to save myself. Then on A Healthy Distrust I began focusing on political and social ills outside of myself which bothered me. Li(f)e is really just a continuation of that but with the focus on religion.”

And while the underlying theme of the new record is religion’s destructive nature, Francis insists it is in no way a concept album. “Not every song is about religion or how the concept of god that religion pushes on us is man made,” he says. “It’s always been a part of my lyrical genetics to rally against modern mythology. This is just an underlying theme that acts as a departing point for the rest of the album’s subject matter. There’s humor and sorrow and politics in there as well. The title Li(f)e is an amalgamation of the words life and lie. What about life is a lie? Let me count the ways. What we’re told about race, gender roles, beauty, war, food, drugs, sexuality, capitalism, and history – all a gang of lies. I feel it in my gut, I write it with my hands and I speak it with my mouth.”

Musically Li(f)e is a distinct evolution for Francis. His dazzling wordplay now complimented by a talented band of musicians consisting of producer Brian Deck (Modest Mouse, Iron and Wine) and cohorts Jim Becker and Tim Rutili of the acclaimed Chicago outfit Califone. To further convey his impassioned lyrical message Francis enlisted a cadre of uniquely talented songwriters whose compositions were then interpreted by the artist and his band giving the record a cohesive sound from start to finish. “I’ve been working with words so long it just felt like time to apply that craft to another structure,” Francis offers “This just feels like a natural progression.”

The album kicks off with a stirring Steinbeck imbued tale of prison break entitled Little Houdini’ with music written by ex Granddaddy front man turned solo artist Jason Lytle.
“It’s based on an obscure news story that I had followed and saved,” Francis explains. “I always knew I wanted to write a song about it. The music is this long epic instrumental piece Jason had which I then worked my story into. I think he was really surprised when he finally heard it. But we specifically sought out songwriters who had never worked with a rapper and didn’t want them to write music they thought they should for hip-hop.”

Next is a rousing punk fueled rap sing along entitled “Three Sheets” with music by Chris Walla of the band Death Cab for Cutie. “There are definitely songs on this record which have a style that is totally unique,” Francis says. “Three Sheets to the Wind is not rap metal or emo rap, it’s got its own distinct feel and sound and style. I think it works really well, but it wasn’t built off of any existing template.” Subsequent tracks on the album include the blues infused hip hop of Slow Man with music by members of Calexico, some raucous barroom surrealism by Tim Fite, a furious modernized waltz by members of DeVotchKa, and Love the Lie with Francis’ biting cathartic lyrics delivered over an immensely powerful melancholy and melodic composition by the late Mark Linkous of Sparklehorse.

The album closes with the sonically unconventional and undeniably affecting Best of Times with a cinematic score provided by film composer Yann Tiersen (Amelie) building emotionally beneath Francis’ startlingly confessional narrative. “I am such a fan of Yann Tiersen,” Francis explains. “And when I received the music from him it just felt so heavy to me, so epic and I knew I had to make the most of it. I didn’t know what to do and then I stumbled upon this letter that I had written to my girlfriend a few years ago explaining where I was in life and what I was hoping to accomplish. And the first line of that letter is the first line of the song. It just sparked all these really intense childhood memories and ended up being my own little movie with words.”

Like so many great songwriters before, from Lightening Hopkins to Bob Dylan and beyond, Francis uses his gifted wordplay for a much greater good, creating vivid narratives and heartfelt confessionals which both instigate and inspire. With Li(f)e he has delivered a masterfully original and entirely essential work for the times.