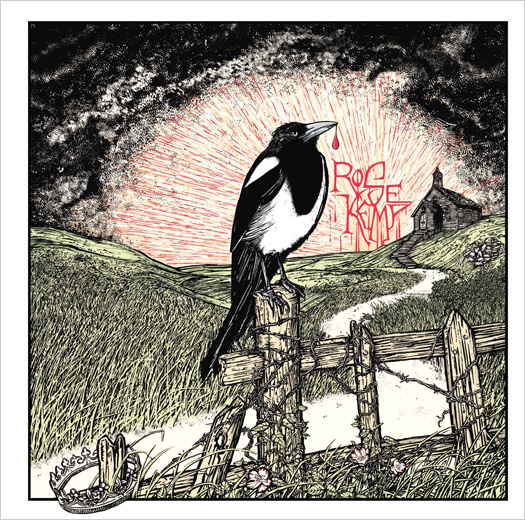 The album was produced and mixed by Chris Sheldon (Foo Fighters/Amplifier/Biffy Clyro.) A download single will precede the album release entitled “Nanny’s World” on June 30th.

The new album follows the success of 2007’s A Hand full of Hurricanes and the stomping, haunting single, Violence.

Rose’s unique powerful vocal is sometimes operatic, sometimes fierce but equally haunting, her musical style is extremely difficult to categorize. Folk-esque /heavy rock has previously been cited but doesn’t really sum up this exceptional album. Woven together with multi hook harmonies and quality instrumentation, this album slowly buries itself under your skin. Lyrically the songs are compelling and their content somewhat mysterious but backed up with heavy rock guitar, oversized drums and old Synths and organs, they are infectious and thought provoking. Her influences are numerous but include the classic rock of Black Sabbath and stoner rock legends Melvins, Drone artists such as Earth and Om. She is also influenced by classic Black Metal, Doom and 70’s prog right through to timeless songwriters including Kate Bush and Tom Waits, amongst many others.

Part of folk-rock heritage, Rose is the daughter of Maddy Prior and Rick Kemp from seminal, Pioneering British Folk-Rock band Steeleye Span.  As a young teenager she sang and toured and occasionally wrote with her parents various different projects including Steeleye Span (who still gig today), and her life on the road began when she was knee-high, accompanying her parents on tour. Her first recorded & writing contributions were on 2002’s a cappella folk album ‘Bib And Tuck’ by Maddy Prior And The Girls, released on Park Records.  The same record label released Rose’s debut solo album ‘Glance’ the following year, before she hit the road with The Oyster Band and Eliza Carthy among others. But Rose was ready to find her own way and continue to branch out of the tradition, trading her acoustic guitar for an electric guitar, taking her in the rock direction we hear today.

Based in Bristol, Rose comes from a burgeoning Bristol underground DIY scene.  Common themes of the DIY scene are artists who are financially self-sufficient thanks to touring. Originally the province of American anti-folk acts – Kimya Dawson and Jeffrey Lewis, to name two – DIY touring reached our shores last year, with artists increasingly spreading the word through the internet, and keeping costs down with the help of enthusiastic fans prepared to promote gigs themselves and give accommodation to touring artists.

Rose has been working on many collaborations and various side projects as ever and has played supports such as Oceansize and Amplifier recently and will touring throughout the UK and Europe in September, dates will be announced shortly.

“Her Voice possesses the same combination of sensual rapture and existential dread.”

“The kind of tracks that stop you dead in your tracks…sheer swooping grace in Kemp’s voice.”

“Prolific collaborator, signing with 3 Bristol bands whilst steering her own solo career”