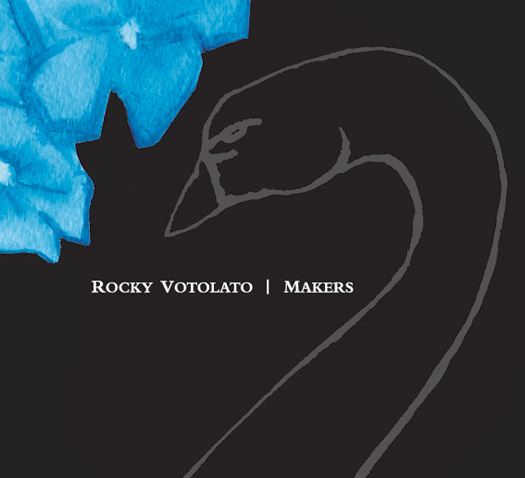 Rocky Votolato is a soft-spoken, hard-working 28-year-old father of two, and his new album Makers is a stunning collection of songs that  draws on Rocky’s rural upbringing in Texas.  This record will delight fans of Iron & Wine, Ryan Adam’s ‘Heartbreaker’ and Son Volt.  Although now based in Seattle, Rocky grew up in a small Cotton town called Frost (population 647), 100 miles south of Dallas.  Growing up with a biker outlaw as a father and living on a ranch with 15 horses, Rocky had an unconventional upbringing soundtracked by the songs of Willie Nelson, Steve Earle, and Johnny Cash. Rocky now says of his childhood, “my dad was in a Motorcycle gang based out of Dallas, TX called the Scorpions. They were rivals with the Banditos and Hell’s Angels. Crazy to think about it now…I remember the family trip to the State Fair and my dad being handcuffed and taken away because of the pistol he always carried in his belt…It took me a long time to realize that kind of shit wasn’t normal.  The only thing I really miss about Texas is the freedom I had there living on 50 acres of horse pasture.”

When his mother moved the family to Seattle, Rocky spent his high school years discovering the underground punk/indie scene, and inspired by bands like Fugazi, he and his brother Cody (The Blood Brothers) formed a punk rock band called Waxwing, which soon gained a devoted fan-base. Still wanting to make music that echoed the life he’d left behind in Texas, Rocky recorded three increasingly accomplished solo albums, and has now produced an album that seems to have been scratched into a boxcar wall by a worn-out and lonesome ghost. Rocky lays out his most intimate thoughts with such honesty that, listening to his words, you don’t feel like a voyeur, but rather an ally, sharing secrets by the dying fire. Makers‘ title, whether it references a vague existential preoccupation or perhaps a certain brand of American whiskey, captures the mood of its 12 songs perfectly.

Following the 1996 breakup of their band “Lying on Loot” (which included futureRed Stars Theory violinist Seth Warren), singer/guitarist Rocky Votolato and drummer Rudy Gajadhar began playing with bassist Andrew Hartley under the name “Waxwing”. Rocky‘s younger brother Cody soon joined the band on second guitar, and they recorded their debut 7″ for Henry’s Finest. In 1999, Second Nature released their first full-length, entitled For Madmen Only. By the timeOne for the Ride was released in late 2000, Waxwing’s profile had grown substantially. Rocky had released a well-received solo record, while Cody‘s other band, the “Blood Brothers”, had a strong following of their own. Rocky released two albums in 2002 (his own Burning My Travels Clean and Waxwing‘s Nobody Can Take What Everybody Owns), and he released his third full-length, Suicide Medicine, in 2003. Rocky has just signed to Barsuk in the US, home to Nada Surf and his album is released throughout Europe on Eat Sleep Records.