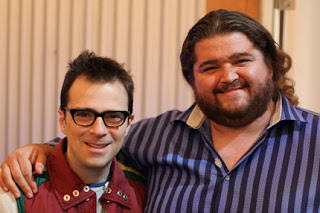 Ten years ago, Weezer fans were guessing whether the band behind two of the most beloved ’90s albums would ever return. These days, everyone’s guessing what they’ll do next — thanks to a decade of catchy tunes, social media triumphs, viral video sensations, and prolific output: Hurley, out September 14, will be their sixth studio effort since 2001.
While fans chatter about the new album’s cover and title (featuring Jorge Garcia, who played Hugo « Hurley » Reyes on ABC’s Lost) and the back-to-Pinkerton feel of lead single « Memories » (listen here), we decided to check in with frontman Rivers Cuomo to get the inside scoop on all things Hurley.

What’s the significance of the new album’s title?
As usual, we struggled super hard trying to come up with an album title, trying to find some kind of phrase that summed up the whole aesthetic behind the album: Heavy Mental, Smaller than Life — I was coming up with all kinds of stuff. But ultimately, we just went with some random word that doesn’t really have anything to do with anything. I met and took a photo with Jorge Garcia who was Hurley from Lost; he just has this amazing vibe and his expression in that photo seemed so right, so we just called it Hurley.
In a recent interview you said, « There’s definitely going to be more raw rock energy » on the new Weezer album. How so?
Weezer’s become a totally kick-ass live band, and when we were making Hurley, you could just hear the sound of people going into the studio, pressing « Record, » and rocking. There’s just an insane amount of energy on songs like « Where’s My Sex » or « Memories, » and also even in the more intimate songs like « Run Away » — lots of loose moments, out of tune moments, but tons of emotional expression. In fact, in some cases, my low-fi demos from home had the right feeling to them, so I just took my vocal track from them and put the rest of the song to that.
There seems to be a divide between old and new Weezer fans. How will the new album appeal to both those groups of fans?
I think Hurley is a record that will appeal to all kinds of Weezer fans. Fans that like the super raw, emotional stuff will be totally stoked with songs like « Run Away » and « Memories, » and then at the same time, there are just really great pop songs, with great melodies and hooks, fun sing-along choruses. So I think everyone’s going to love it.
With Pat Wilson on guitar and bassist Scott Shriner singing occasionally, it seems Weezer has taken on a new dynamic. Did you write most of the new songs? Or do Patrick and Scott contribute to the songwriting on the new album, too?
The recording sessions were very fluid, with all of us swapping off different instruments, just depending on what felt right at the moment. And that’s pretty much how we work now. Weezer isn’t stuck in roles, so we just do what we want to do, what makes us excited. The other guys aren’t writing on this album, though.
When did you write the songs on the new album? Were any of them written while you were recovering from the tour bus crash?
Most of the songs were written in 2009-2010. Some of them were written in that period after the bus crash — in fact, the first song I wrote after the bus crash was « Trainwrecks. »
Tell us about a few of the songs on the album, their titles, and what they’re about.
« Memories » is about that time off in between album cycles, when you’re sitting at home, and you’re getting bored and frustrated; you’re missing the excitement of being on tour, and you’re missing the companionship of your bros.
« Where’s My Sex » — I can’t remember now, if it was my two-year-old daughter that said it, or my wife said it, or my wife told me that my daughter said it — it was one of those three things. One of them accidentally said « Where’s my sex » instead of « Where’s my socks » — they couldn’t find their socks. And when I heard them say « Where’s my sex, » I just thought, « That’s a cool song title right there, » so I went and just started writing like crazy. And I wrote all the lyrics. First, I wrote it all about socks, like the song is all about trying to find your socks and how terrible it is when you’re not wearing socks. And then I just went back and changed a few letters in the word and it became a totally different animal.
« Smart Girls » — the song was originally « Hot Girls, » about how frustrating it is to have all these amazingly hot girls tweeting at me and it just felt so frustrating because I’m not in that life stage anymore where I can do anything about it. So I wrote this song « Hot Girls. » It ultimately ended up feeling — I don’t know, too macho or something? So we just changed it to « Smart Girls » and every other lyric stayed the same, like a really cheesy song about girls. But just changing that one word makes it really different and interesting.
It actually reminds me of that song « Back in the USSR » by the Beatles, because everything about that song is like a really cheesy, early Beach Boys type of song, except they changed the setting. And it becomes cool.
So that’s the lesson, I think, is just to keep revising, keep working until you’re satisfied that it’s totally cool. If there’s any little voice bothering you, like, something about this isn’t cool, something about this isn’t right, that means there’s something yet to be discovered, so keep pushing.
« Unspoken » was written right after I got married and after living alone for so many years, having everything exactly how I wanted it, suddenly I’m living with somebody else and I have to start making compromises in my lifestyle and boy, part of my mind was really unhappy about having to compromise. It was just a real adjustment coming from my previous lifestyle.